Getting To Know... The Erly

Getting To Know... The Erly

Their new single 'You're Heaven' is out now 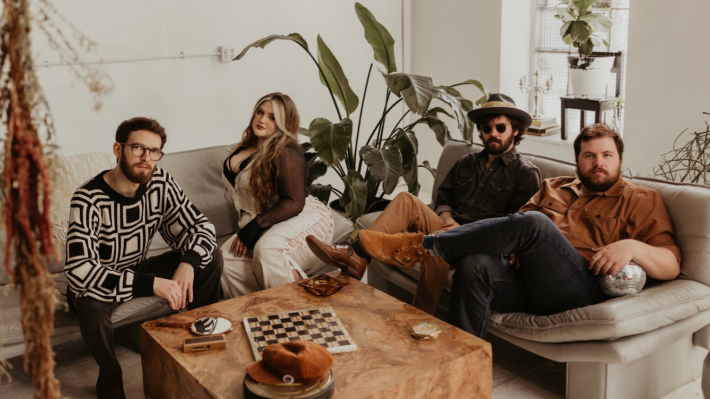 Following on from a string of bold and refreshing outings throughout the last few years, Michigan-based outfit The Erly burst back onto the scene with the funk-infused new single 'You're Heaven'.

Channelling the warm and upbeat soul sound of the 1960s and 70s, 'You're Heaven' makes for a wonderfully bright and toe-tapping listen. Jam-packed with sultry grooves, soaring hooks, and even an infectiously catchy brass addition, this new one will be instantly draw you in with its powerful aura.

So with the new single available now, we sat down with them to find out more about their origins and what has been inspiring them most lately.

Alyssa: The human voice. I have been singing all my life, and through my years studying voice and taking lessons I’ve fallen in love with the way people are able to connect with others through collective singing and evoke emotion through lyrics. It feels the most raw to me.

Collin: Guitar. It started off with Guitar Hero. At some point, I thought "You know what, how about I give the real thing a try?". I picked up the acoustic, then the electric. And I never looked back.

Fran: Drums. Not once have I wanted to play a different instrument. Drumming came naturally to me.

Trevor: Piano, something about the visual aspect made music seem like second nature.

Alyssa: I was raised on 70s Motown 90s RnB. I immediately fell in love with both of them. That love has stuck with me and I think it shines in our music too.

Collin: My intro to music was classic rock. From there, I went into 90's alternative and pop punk. Then a smooth transition into folk rock.

Fran: I was/am a huge Beatles fan. Also went through a 1950s rock and roll phase.

Trevor: I loved 70s/80s rock, the guitar leading sound encompassed a lot of my childhood.

Alyssa: Michael Jackson’s Greatest hits. When I was like ten I went through a phase where I was completely enamored with Michael Jackson. His music, performance abilities, and style.. I saw that shit as a kid and was like THIS IS THE TICKET.

Fran: JET’s Get Born. It’s also the album that got me into playing drums.

Trevor: I remember it fondly. It was the Grateful Dead’s greatest hits. I hated it. As I’ve grown older and grown an appreciation for the use of musicality. I fucking love the Grateful Dead now.

Collin: Tangled Up In Blue by Bob Dylan.

Fran: Somewhere Along the Way by Dawes.

Alyssa: I usually have stuff just come to me randomly, often when I’m driving. I’ll hear a melody in my head, take a voice memo of it, and then listen back and come up with the rest later. Sometimes the lyrics come to me with the melody as well and I can just throw it together and get a start. If I’m in a good headspace, it just flows out of me all at once.

Collin: Melodies usually come first for me. Then, deciding whether that melodys should go through vocals or an instrument. Depending on how the chord progressions and melodies make me feel, I'll start writing lyrics. I try to come up with lyrics that talk about something new. Or at least talk about something simple in a way that I haven't heard before.

Fran: Start with a good title and go from there. Must have a lot of coffee in my system.

Trevor: I always tend to start with the chorus, once that’s accomplished it’s all about attaching verses that lead in and come away from choruses. My favorite thing is to propose a challenge to myself musically. If I’m saying “woah this is tough” I love it.

Alyssa: Connecting with other people, musicians and otherwise, on a different level. We’re able to deeply resonate with each other and the people that listen to our music through the things we play, especially in a live setting. The art helps us all escape for a little while, and I think that’s really beautiful.

Collin: Being able to experiment with different musical ideas in both the studio and in a live setting.

Fran: being able to work/connect with other musicians on stage or in the studio.

Trevor: The ability to speak through an instrument better than words could portray.

Alyssa: Putting a lot of time and work into something and not seeing an immediate return. We live in a society where nearly everything is instantaneous, and not getting that instant gratification, or sometimes any gratification at all, can be a frustrating.

Collin: Wondering if what your doing now is going to be better than what you did before.

Fran: The uncertainty of whether or not all your hard work will pay off.

Trevor: Knowing that there’s always going to be someone better than me.

Alyssa: Having great musicality and skill is only half the battle— you have to be tenacious. Know what you want and not be afraid to go for it.

Collin: Let the music do the talking. Learn to listen and listen to learn.

Fran: As a drummer, you must always play for the song. If you have the “less is more” approach, you will always get the call back for a gig.

Trevor: Sit back, don’t play sometimes, and you’ll do a lot more for the song.

The Erly's new single 'You're Heaven' is available to stream now. Check out the new video for it in the player below.

11 hours 9 min ago With her eagerly-awaited new remix EP landing next month, Bess Atwell has now shared the next cut

14 hours 4 min ago After an astonishing run of form throughout his releases over the last decade, South African sing