Her new single 'Stuck In The Middle' is out now 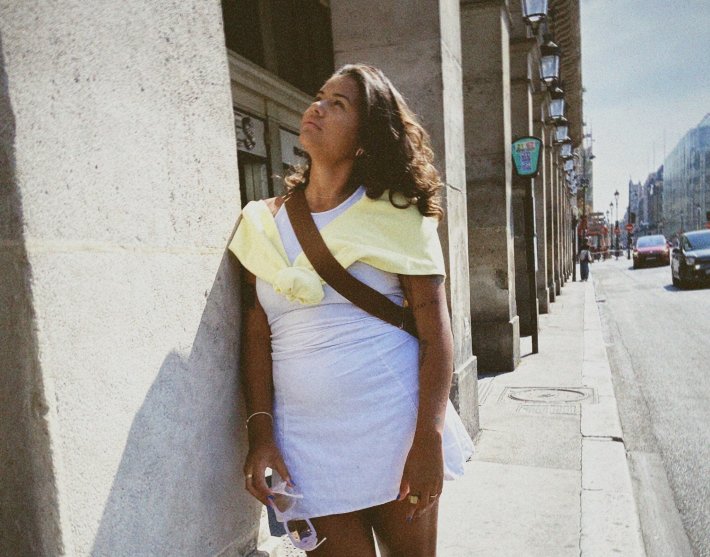 Having already found praise from the likes of BBC Introducing and Notion for her recent releases, London-based artist Faye Meana is on the grind once again with her vibrant new single 'Stuck In The Middle'.

Capturing a wonderfully rich and dynamic approach to the 80s electro-pop sound, 'Stuck In The Middle' makes for a beautifully lofty listen. With her warm and tender vocals riding a bright and bouncing production throughout, she is continuing her rise as one of the more captivating names emerging right now.

Well, I’ve been playing the piano since I was 5 years old. I remember being super drawn to it, both playing it and listening to it. After I started playing, I never stopped.

My childhood hero was Aretha Franklin, I used to listen to her ‘Aretha Now’ album on repeat. But Motown in general was most definitely my genre of choice for the majority of my childhood.

I used to steal a lot of my mum and dad's CDs but I remember my first independent purchase being the Dreamgirls soundtrack. I used to listen to it and belt out the tunes for hours on end. I remember one of our neighbours 2 doors up saying they were enjoying the singing although in hindsight it was probably a polite way of asking me to take it down a notch haha.

This is SUCH a tough one as there are so many but I think Wildfires from Sault probably takes the top spot. One of the most incredibly written and produced songs of the past 10 years in my opinion.

No actually, not at all. I think for me my creativity only really flows when I’m experiencing new things so I try to switch things up as much as I can. I guess my one habit though could probably be the fact that I like to write in the dark.

Again, this is a pretty rough one but I think Tame Impala would be pretty sick.

I think reading people's messages about how my music has affected them in a certain period of their life. I think the idea of being the soundtrack to someone’s life is insane. Also, bringing people #1 on Spotify Wrapped is always a nice feeling haha.

Having creative block, by a long shot.

Industry advise - the music industry is a business so take things with a pinch of salt.
Creative advice - write what you want and how you want. Not what you think people would want to hear. People usually tend to relate more to the former.

Faye Meana's new single 'Stuck In The Middle' is available to stream now. Check it out in the player below.

3 hours 19 min ago Following on from the release of their highly-praised 2020 debut LP 'Bedroom', bdrmm have now ann

1 hour 50 min ago After spending the last few years delivering a wealth of fresh and explosive anthems, Iowa-based