Getting To Know... KIN TALA

Getting To Know... KIN TALA

Their new single 'Kemosabe' is out now 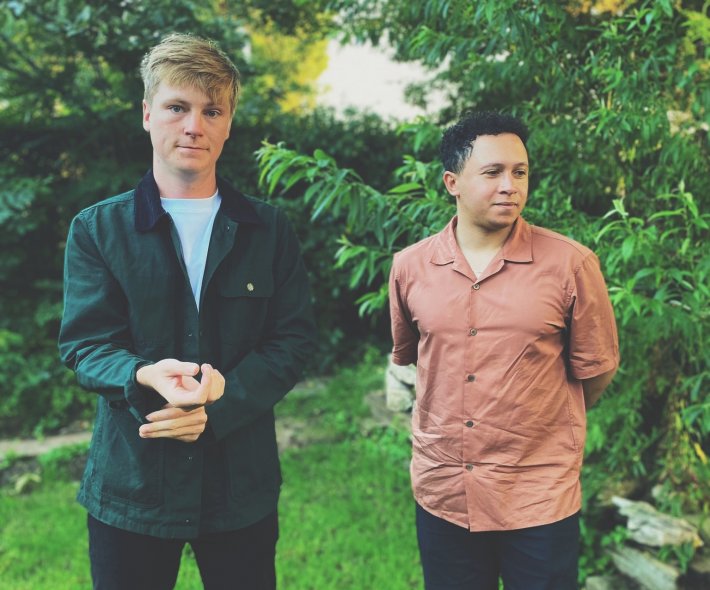 After recently releasing their impressive debut single 'Swallow' earlier this year, Blackpool-based duo KIN TALA are back once again to unveil their shimmering sophomore effort 'Kemosabe'.

Channelling more of that smooth and breezy psych-pop groove they are building a reputation for, 'Kemosabe' makes for vibrant listen from start to finish. With its sweet and sweeping textures, and soaring atmosphere layered throughout, they are certainly crafting an enticing direction with this one.

So with the new single out now, we sat down with them to find out more about their origins and what has inspired them most over the years.

Dom - My step dad introduced me to the guitar when I was about 15/16, and we’d watch videos of Dave Gilmour, Jimi Hendrix and Chuck Berry all the time and he showed me some classic riffs. After that, I pretty much taught myself everything, trying out different styles and learning songs from different genres.

Shee - I’ve played piano from a young age, my mum is a pianist and got me into lessons as soon as she could. As a teenager, the bands I admired would rarely have a keys player so I was desperate to pick up something else and be able to play along to my favourite artists. I managed to get hold of a second hand strat for £40 and this was the first instrument I fell in love with, despite it not being able to stay in tune for more than a few minutes.

Dom - My family have always been big on 80’s acid jazz, hip hop and funk. Growing up as a kid, I was a huge Jamiroquai and Us3 fan, and remember just not having a clue about what other artists my mates or classmates would talk about. Getting older, I started listening to Talking Heads a lot, before moving on to bands like The Smiths that then really started to influence my guitar playing.

Shee - I remember exploring my mum’s CD collection as a kid and being obsessed with ‘Parallel lines’ by Blondie and Queen’s ‘Greatest Hits’. My uncle also bought me Led Zeppelin’s ‘IV’ as a birthday present one year, I must have been 13 or 14. I think exposure to these kinds of things probably influenced me to love guitar based music from a young age. Arctic Monkeys and Bloc Party were the first bands I really loved.

Dom - The first album I ever bought as a CD was Whatever People Say I Am, That's What I'm Not by the Arctic Monkeys. They were the first band that fundamentally changed how I saw contemporary music, and the first time I really felt like I could connect and identify with the themes and the lyrics. Such a banger.

Shee - Yeah, same. One of my neighbours gave me a copy of it on CD. Discovering that album was life changing.

Shee - I think I would probably give you a different answer every time you asked me this question. Today it’s ‘This night has opened my eyes’ by The Smiths. Andy Rourke’s bassline on that track is incredible, it carries the whole song.

Dom - Most of the time, ideas, lyrics and melodies come to me when I’m walking around Frankfurt or when I used to live in Manchester. From there, I usually grab myself a big mug of Yorkshire tea, ask my girlfriend if she minds (my ‘studio’ is in the corner of our living room) and start fiddling with my guitar.

Shee - Nope, not really, i rarely sit down to try and write music. Usually, I will just keep playing until something sticks - some days it does, some it doesn’t. We’re always recording little ideas and sending them to each other. Sometimes it’s years before they’re resurrected and actually turned into something that resembles a song.

Dom - So Metronomy just dropped an EP last week and it’s insane. Porij are a really cool upcoming band from Manchester, they’ve got some really nice guitar melodies and production. One of my favourite artists and vocalists Orlando Weeks has released some amazing and emotionally resonant songs recently for his upcoming album.

Shee - Dom and I take it in turns to put together a Spotify playlist each month. 20 tracks of new artists we’ve found, tracks that have inspired us, and a few old favourites. For me, some of the standout artists over the past couple of years have been: Men I Trust, Crumb, Biig Piig, Saint Jude, Babeheaven and Her’s.

Dom - For me, it’s the recording and mixing process. It’s gut-wrenching at times, and it’s such hard work.

Shee - I love jamming and writing music. It’s the best feeling when an idea, or a melody, you’ve been playing with for a long time just clicks into place and then out of nowhere you have a fully formed song. It’s like completing a really difficult jigsaw puzzle.

Shee- Not being able to commit more time to it.

Shee - Music is just another language that crosses everyone’s borders.

KIN TALA's new single 'Kemosabe' is available to stream now. Check it out in the player below.