Getting To Know... Pennan Brae

Getting To Know... Pennan Brae

The frontman's new single 'Pay Dirt' is out now 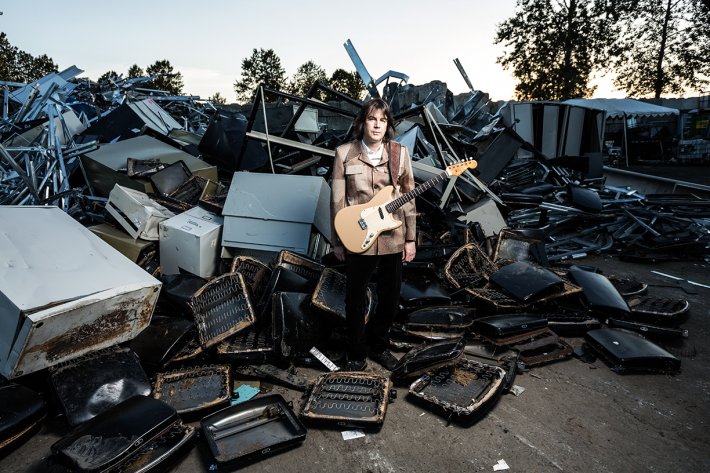 With his latest single currently receiving huge amounts of airplay across North America right now, singer and songwriter Pennan Brae is now looking to do the same of these shores as he shares his latest banger 'Pay Dirt'.

Lifted from his soon-to-be-released studio album '2 Below 0', 'Pay Dirt' makes for an incredibly fun and uplifting new offering. Channeling the smooth yet pounding rhythm of the 70s New York punk scene, this new belter borrows from the world of blues and psych-rock to create a fresh and bouncing new jam.

So with his new single growing in popularity by the day, we sat down with him to find out more about his origins and what has inspired him most over the years.

The first instrument I fell in love with was the piano. I began playing at age 5 when my Mom signed me up for lessons. I admit to not loving all the music I was playing at the time, but I’m sure thankful I was exposed to music at a young age. By the time I hit my teens, I was playing popular music via sheet music which was a lot of fun & then I got into blues music in college. I then fell in love with the guitar.

Musically it’s The Rolling Stones & American blues music of the 1940s & 50s. I also love the energy of rock & roll of the 1950s; what a magical time. With The Stones, I appreciate the energy of them on record; they sound so explosive in your living room. And live of course, they’re amazing. & with musicians like Muddy Waters & BB King, they hit the mark & it doesn’t get better than that.

As a teenager, I loved mainstream pop & rock music of the day. It was the 1980s & there was so much great songwriting & arrangements on the radio. I enjoyed Madonna, Van Halen, John Mellencamp; you name it, I loved it. It wasn’t until my older teens that I learnt deeply about blues music & music of the 1960s & 70s, such as The Stones & The Beatles. Suddenly there was this giant catalogue of music to dive into which I’m still sifting through today. I began exploring the first rock & roll of the 1950s with Little Richard, Chuck Berry & Elvis Presley which was so exciting.

I recall 2 early songs which really hit me; I had 2 ’78 inch records as a 5 year old; I still have them. One is ‘Hard For Me To Say I’m Sorry’ by Chicago & the other is ‘Too Much Time on My Hands’ by Styx. The vocals and instrumental arrangement in the Chicago track is gorgeous & the sonics of the Styx song is magical. They were mysterious, powerful & diverse sounding songs that fascinated me as a young kid. I’d play the records over & over. But then I got into blues music when I was 18 & a whole new world opened up. I started playing the harmonica & it was such a fun way to express myself.

Anything good! I’m into classic rock & don’t listen to much music past the mid-1990s. Maybe it’s the Chilli Peppers or The Who or The Eagles; there’s so much great songwriting & recordings out there; it’s just wonderful.

A few. One track I wrote, ‘The Forgotten Man’ is about my grandfather who became forgotten when my grandmother developed Alzheimer’s. That’s an incredibly painful thing to witness. Other songs are abstract & about a feeling & not anyone at all.

I got to record with legendary drummer Steve Ferrone, who’s played with Duran Duran & Eric Clapton & was a member of Tom Petty & The Heartbreakers for 20+ years. I used to watch Steve on Clapton’s ’21 Nights’ performance at Royal Albert Hall in 1991. I wore out that VHS tape. I also got the chance to record with bassist Garry Gary Beers of INXS & devoured my cassette of their timeless album ‘Kick’ in the 1980s. So to have the chance to record with these 2 incredible musicians was a huge thrill. They played on ‘Walk With Me’ & ‘Crashland’ from my album, ‘The Astronot’.

I enjoy screenwriting a lot. I’ve written 2 feature length films, ‘The Astronot’ (2018) & ‘2 Below 0’, (2019). ‘The Astronot’ streams on Amazon Prime & ‘2 Below 0’ is currently on the film festival circuit. I enjoyed writing concepts for music videos prior & have filmed over 20 music videos for my songs. I began wanting to tell a longer story than just 3-4 minutes & so dove into screenwriting. It was so much fun & a real creative high.

I’d probably be doing a small business of some sort or providing a service for seniors.

Just love what you do & dive into it. Be aware of the business aspect of the industry. Royalty streaming rates are low & it’s a difficult financial path. But go for it & see where it leads. Most importantly, enjoy the music & the journey along the way.

Pennan Brae's new single 'Pay Dirt' is available to stream and download now. Have a listen to it in the player below.

15 hours 17 min ago With his long-awaited new album now just a few days away, Jónsi has now returned to unveil yet an

16 hours 36 min ago With a wave of bold and impressive singles under her belt already this year, Bulgarian singer and