The frontman's new EP 'Kiss Politics' is out now 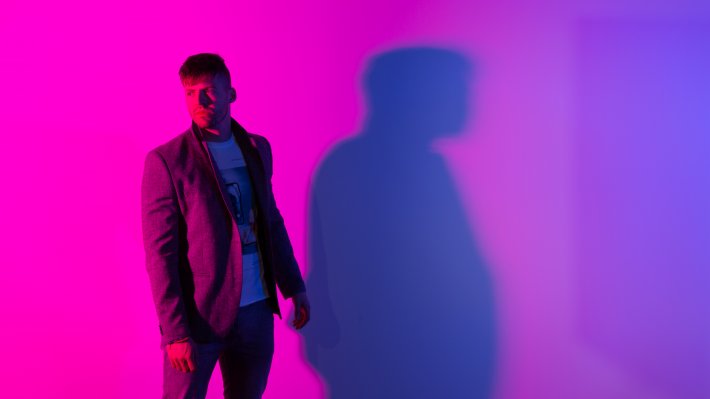 After first introducing himself at the end of last year with his debut single 'Kiss Politics', Preston-based producer and singer twobox. has now delivered his long-awaited new EP, also called 'Kiss Politics', and is looking to make a grand impression with his first release.

Taking his cues from the 80s synthwave and new romantic era, 'Kiss Politics' is one of those rare releases that manages to balance a nostalgic and contemporary aesthetic in equal measure. Filled with euphoric keys, sweeping vocals, and a blistering production, the four-track collection looks to capitalise on the growing fondness for the 80s sound of late.

So with his new release finally with us, we sat down with him to find out more about his background and what has inspired him most over the years.

Guitar was the first instrument that I took the time to learn. I was taught piano briefly by my grandad when I was young but never seriously. At 15 years old I couldn’t think of anything cooler than being a guitarist in a rock band. I remember getting an Epiphone Les Paul for my 16th birthday and a copy of the tab book for Guns n’ Roses - Appetite for Destruction and just trying to work my way through religiously learning each song.

That’s a difficult question, recently I would say artists like The 1975, Chain Gang of 1974, Miami Horror, Bastille, Chvrches etc. but prior to that I was heavily influenced by post rock bands such as Explosions in the Sky and Mogwai. In terms of my inspiration to write and play music, I remember being about 18 years old and a bit lost and Taking Back Sunday’s album ‘Where you Want to be’ really helped, like there were certain songs that really resonated with me. That was around the time where I first decided I didn’t want to just play other people’s music but actually create my own and share my story.

Punk Rock. I fell in love with music because of Blink-182 and they’ll probably always be my favourite band even though my music taste has moved away from them as I’ve got older. I still admire the simplicity of punk music.

I can’t remember a specific song but I can remember the moment at which I decided I wanted to start writing my own music. I was roughly 18/19 years old and I was sitting in my bedroom messing around on my guitar and I’d be learning various tabs from guitar magazines etc. and I was feeling a bit bored and jaded. Anyways I just started messing around and then sounds started happening that I liked and it kinda dawned on me that I was bored with playing other people’s music and it was time to move on to trying to write my own.

My alarm tone is ‘Your Hand in Mine’ by Explosions in the Sky. I hate mornings and really need something soothing and gentle and that track builds really well, so as an alarm it’s great because I don’t feel like I’ve just been assaulted out of bed by some sort of siren.

All of them. I find it hard to write about something other than personal, emotional experiences I’ve had, so literally everything I’ve written about is in some way related to a person I’ve known or still do know.

Well, given that I managed to time my debut release with a global pandemic there’s not been a huge amount so far! In a previous post rock project I created about 8 or 9 years ago we got picked by a radio station in New York which was pretty mind blowing but it didn’t really go any further than that.

Having fun. That’s a total cop out isn’t it? Erm… I really enjoy sports, so I’m always up for playing or watching sport. I studied art at university so I enjoy visiting art galleries etc. Generally I tend to enjoy being creative, it’s what I do for a living but I also have a genuine passion for creating things. Oh I like reading history as well.

Something sports based definitely. I love running around and being active so I could easily have seen myself pursuing that full time. I skateboarded for like 10 years between the ages of 13 and 23 so I’d have loved a career within the skate industry in some capacity, be it board design, or filming etc.

Are you passionate about music? Do you love the process or do you just like the idea of being a rockstar? I think in order to achieve success you have to be fundamentally really passionate about what you do. Sometimes producing a track can be a tedious process and creativity is hard to capture at times so it’s often really frustrating and can be disheartening sometimes. That’s when you need to have that underlying passion. That will get you through the difficult moments and allow you to really enjoy and savour the highs. Personally it’s not really about the end result, it’s the journey and how you get there that will make you happiest.

twobox.'s debut EP 'Kiss Politics' is available to stream and download now. Have a listen to it in full via the player below.