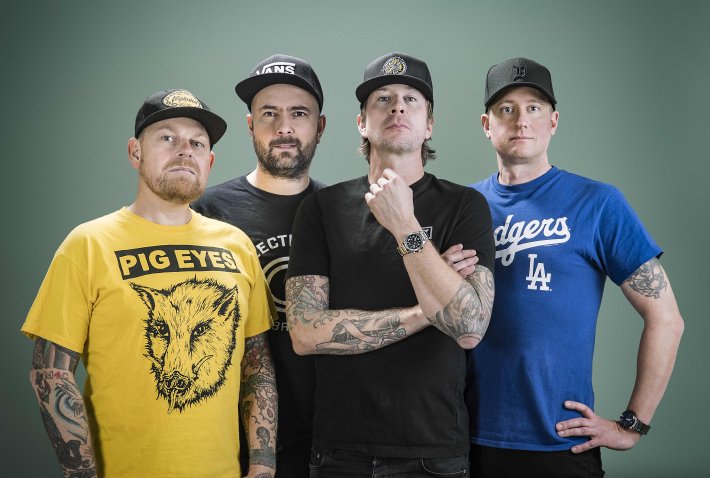 As one of the hardest working bands in the world for the last two decades, Swedish punks Millencolin recently released their ninth album 'SOS' to stellar reviews. So with the band making a rare stop to the UK for Slam Dunk festival over the weekend, we caught up with guitarist Erik Ohlsson to find out how they plan for so many shows and what they expect from the British audience.

Hi Erik, how are you doing?

How was your set yesterday in Leeds and how do you think today will go?

Well we haven’t played the UK in over two years now but it’s always been great here for us. We expect a good show and yesterday was a good show. The last time we played Slam Dunk we had an incredible time so we are hoping for more of the same later. London has always been really good to us.

Have you got any surprises in store?

I think the only surprise will be some stuff from our new album. We’ve already toured it in Australia and the rest of Europe but haven’t played any of our new material in the UK yet.

And how has the new material been going down overseas?

It’s been going down well, but for us, we feel people really want to hear our older songs. The fans really like the new album, but they haven’t been listening to it as long as they have with the older ones. But it does feel very different to perform the stuff as well. You know, I can wake up at 4am, pick up my guitar and play the old stuff perfectly, but this time I have to think a little bit more. But it is so much fun to play the new stuff because we are just so used to playing the old stuff now.

And obviously with a festival, not everyone is going to know who you are. So decisions go into making a setlist for a show like this?

Well last night in Leeds was our first festival show of the year. We have only been doing club shows so far and they have all been our fans so they have been listening to the new stuff right away. But I think it was still a good response. Today I think we’ll open with a classic hit and then have a new one afterwards. Because we normally start with the first track off the new album, which sounds great because it has an intro and everything. But our promoter said we should probably start with a classic, so that’s what we’ll do later on.

You’ve also had nine albums so far. So when you’ve got that much material and it’s a very short set, how do you decide what to play?

Well we usually choose about three new songs to play, and then stick mainly to the hits for the rest of the show. But our recent shows we have played for more than 90 minutes some nights, so it is hard to pick what to take away. I mean we have over 150 songs, and we usually get that down to 25 songs for our normal set. But now we have to get it down to about 15, so that will be hard for us. But I think the most important thing when you are performing is to have some flow and dynamics between the songs. It’s still really short for us but I still think it sounds good.

And throughout those nine albums, you have been on Epitaph Records, the most well respected punk label in the world. What have they been like to work with after all that time?

Epitaph is great. We’ve known Brett Gurewitz (label founder) since 1996 and it feels like we have a really good relationship with them. And on this new album, they did a really good job. They were really pushing us to do stuff, which really helped us do our best. You can have some labels that just wait for you to send you something and put it out anyway. But as I do all the graphic design and media for the band, they were sending me an email everyday to make sure everything was looking good. Which is so good of them to focus on us like that.

And now that the album is finally out, what are your plans for the rest of the year?

Well I think we are already booking festivals for next summer right now. We are already doing 16 festivals this summer and then we head to the US for a headline tour of our own, followed by shows in Sweden, Norway and Finland up until Christmas. And then we are doing Europe again without the UK unfortunately, then its back to the US for the second leg of the tour before going back to festivals.

So it just keeps going for you all year?

Yeah, usually when we release an album, we tour for two and a half years. We do get to go home between the tours as well though, we are not on the road all the time.

But you keep it international as well? Constantly off to other countries throughout your tours?

Yeah well we are such an international band. Our biggest markets are Australia and South America, although Germany has also been really good for us this time around too.

Millencolin's ninth album 'SOS' is available to stream and download now. Check out their latest single 'Nothing' in the player below.

11 hours 54 min ago With their highly-anticipated new album due out at the end of the month, Dizzy have now unveiled