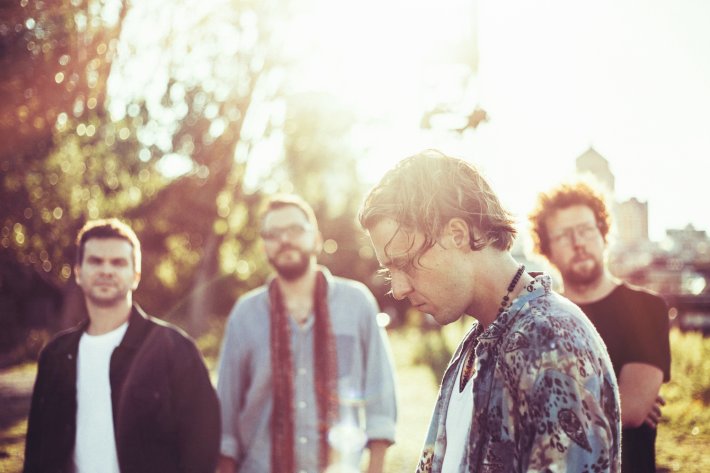 The band is set to release their highly anticipated sophomore album titled Blue Ceilings on February 24 via Indica Records. Blue Ceilings is now available for pre-order and includes the singles “I Know The Feeling” and “Walk With You” as instant grat tracks. The quartet who has already amassed more than 2 million streams (Spotify, Deezer) will perform at the The Mod Club on March 30 and will head out on an Australian tour starting this week. Recently, TFE attracted newfound attention and a slew of new fans after their performance on The Bachelorette Canada during a scene filmed at Chateau Vieux-Montreal. See below for a full tour routing.

Shot by one of Canada's top award winning directors Kristof Brandl (Skrillex, Charlotte Cardin, Monogrenade), the video for “I Know The Feeling” embraces a gritty, indie ‘16mm film hand held’ aesthetic, inciting nostalgia with its wistful ‘90s backdrop. Jon Matte had this to say about the shoot: “The video was a bit unclear in the beginning and came together quickly but I just remember all the rolls of film and how special it was to have a huge crew of extras that all dedicated their time. It became a game of hanging out then freezing on the spot to create the feeling of an old photograph.” Jon shared this quote on the inspiration for the song: "Lyrically, the song revolves around that feeling we can all relate to about regret...being lost and rediscovering ourselves, or trying to hang on to an idea or version of ourselves. Musically, it’s kind of a blend of folky storytelling with a hip hop backbeat and some Roland Juno synth added for good measure, which seemed to all come together nicely.”

The Franklin Electric’s soaring and anthemic debut album, This Is How I Let You Down, was first released independently before catching the attention of Montreal’s Indica Records (Half Moon Run, Phantogram) who were blown away by the band’s sound. The label reissued the LP in 2014 featuring various remixes and two new songs to much critical acclaim for both their recording and their incredible chops live. Striking for both its stunning chord changes and mature musings of life and love, the title track’s video quickly racked up over 250,000 Youtube views, launching the band into the spotlight. The Franklin Electric amassed an avid fanbase and rave reviews after spending 2015 playing over 180 shows from Canada to Australia - including 3 tours of Europe alone – opening for the likes of Ben Howard, Mumford and Sons, Edward Sharpe and the Magnetic Zeroes, City & Colour, and Half Moon Run.