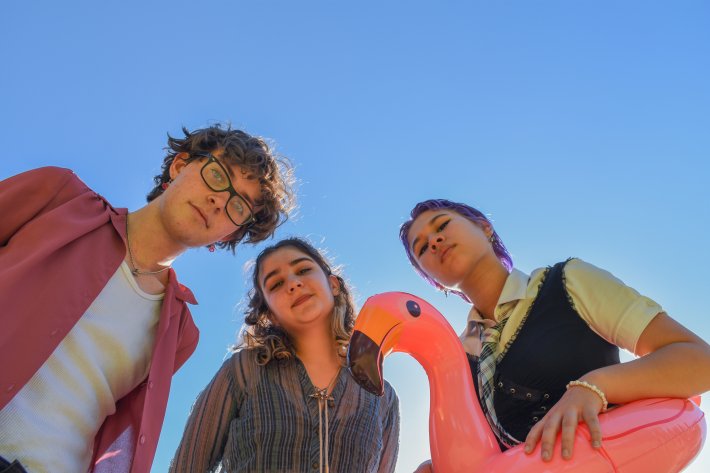 After spending the last few years building and developing their sound, San Francisco-based outfit Flamango Bay have now signed themselves to the coveted 0800-MOSHI-MOSHI imprint and unveiled their brilliant new single 'Fishing For The Sun'.

Set to appear on their forthcoming debut EP, which is due out next year, 'Fishing For The Sea' perfectly encapsulates the band's bold and breezy aesthetic with effortless finesse. Written by the group's Ikaika Gunderson amidst a gender identity crisis, it was the supportive environment cultivated by the prominent genderqueer and transgender element of the group’s local music scene that allowed them to explore feelings they suggest they may have pushed away for a long time otherwise.

Speaking about the new offering, the band said, "'Fishing for the Sun' is like finally coming to terms with and acknowledging life’s hard realities. You were ignoring something and now you’ve finally gone through what you needed to to be able to face it. Now you’re trying to figure out your place in the world moving forward.

"In the case of Ikaika, their gender identity was the thing they were ignoring and fishing for the sun was how they began to look at it head on and unpack it. They wrote this song during a very isolated part of quarantine, when a lot of people including themself were questioning and contemplating their identity. In astrology your sun sign represents your identity, so fishing for the sun could mean trying to figure out who you are."

Have a listen to 'Fishing For The Sun' in the player below.

15 hours 49 min ago With their long-awaited new album due out in the coming months, Bloc Party have now unveiled the

15 hours 33 min ago After an impressive run of releases throughout 2021, which included ‘Devotion’, ‘Harder’ and ‘Und