Getting To Know... The Sunset Kings

Getting To Know... The Sunset Kings

Their new single 'One Man Army' is out now 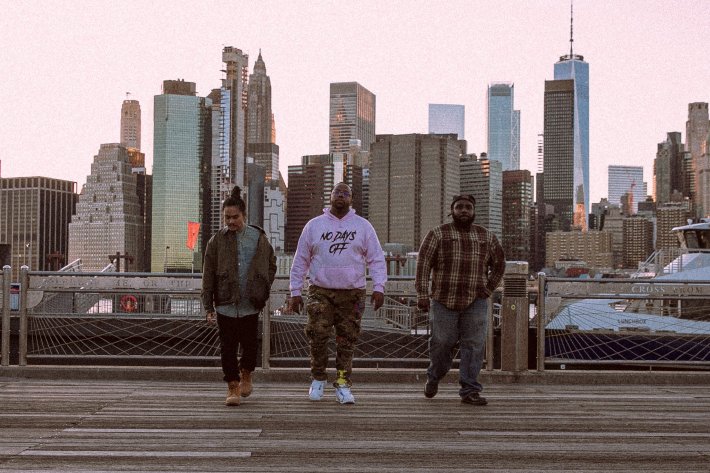 After cementing themselves with a broad and inventive array of releases over the last few months, emerging trio The Sunset Kings return once again with their driven new single 'One Man Army'.

Channelling a heady mix of smooth and soulful grooves with an energetic demeanour, 'One Man Army' makes for a brilliant vibrant listen throughout. With its raw and pulsing aesthetic and adventurous direction from start to finish, it already feels like we are going to be hearing a lot more from this lot in the months ahead.

Star: For me it was the guitar. I actually grew up playing piano, but when I got my first guitar in high school I stayed up most nights learning how to play it.

Neumi: I didn’t play any instruments until college. I was a computer science major and always wanted to learn saxophone so I picked it up and spent hours and hours practicing jazz, especially after meeting the band.

Star: I had a bunch of favorite records; “Weak” by SWV, “Diggin’ On You” by TLC, “Dancing In the Street” by Martha and the Vandellas, “Sittin’ on the Dock of the Bay” by Otis Redding… My parents listened to a lot of Beatles, my brother introduced me to Pharcyde and The Beastie Boys, and the town I grew up in had a really hardcore emo scene.

Neumi: EDM “hard style” alt rock punk music Fallout Boy old school Kriss Kross freestyling was less about technique and more about us just getting a crowd and having fun - it wasnt about being good, it was more about those punchlines.

Star: I don’t know if this counts, but I learned how to drive to “Labcabincalifornia” because it was stuck in my first car’s tape deck since before it was mine.

“Here” by Alessia Cara. At a time when we were feeling most disconnected from our inspiration as musicians, it reminded us why music is such a powerful thing. It’s the kind of song that takes you out your body and at the same time makes you feel very authentically yourself just listening to it.

We got a couple depending on what it feels like a session is calling for. One is we’ll either all sit in the studio or go out for a drive and take turns queuing up a song. Another is we’ll plug in and run our entire live set to get things warmed up before writing.

It changes up, but recently been listening to a lot of Kairo, Tems, Omar Apollo… Frank Ocean’s a staple though.

Star: I’ve seen Umi a couple times live, I feel like our music would be a cool contrast.

The most rewarding part’s got to be when people DM us or come up to us after a show and open up after listening to our music. This one person came up to us at a show in Birmingham and bought us drinks onstage to apologize because she thought we were the radio when we started playing and wanted to apologize for not paying attention. After our show, she sat down with us and started telling us about moving from South America and all the stuff she missed from home, that was a really cool experience.

There’s no benchmark for progress. It feels like “success” is more of a gradient and you don’t feel like you arrive at places or milestones; you just realize at some point that you are, in some capacity, doing the thing that you set out to do. Because of that it’s really easy for impostor syndrome to set in.

The Sunset Kings' new single 'One Man Army' is available to stream now. Check it out in the player below.

4 hours 15 min ago After delighting us with a flurry of warm and enticing releases these last few months, James Vick

4 hours 31 min ago After establishing himself with a flurry of releases throughout last year, fast-rising artist Tot