Getting To Know... Vic Da Looper

Getting To Know... Vic Da Looper

His new single 'Bluff' is out now 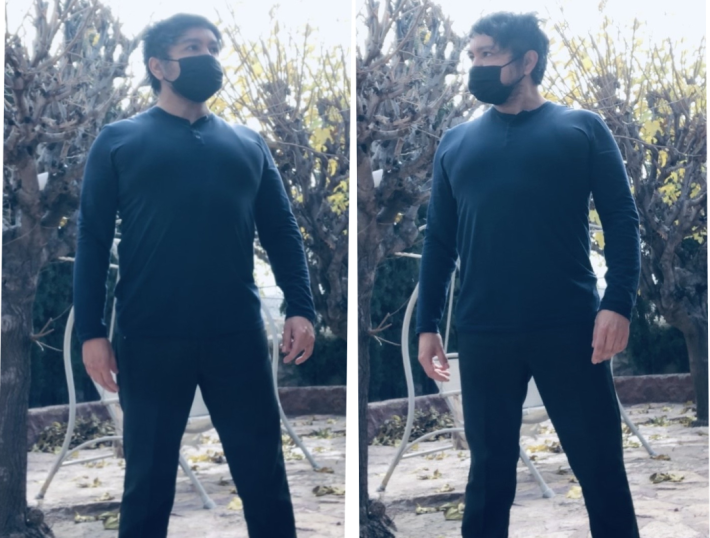 Following on from the release of his highly-praised 2020 debut album 'Fasty Deado', as well as touring with the likes of Cigarettes After Sex, fast-rising multi-instrumentalist Vic Da Looper returns once again to unveil his shimmering new single 'Bluff'.

Lifted from his new project 'Amor Delusion Institution', which is available now, 'Bluff' offers up more of that same broad and atmospheric direction he is known for. Jam-packed with glittering textures, progressive tones, and his own ethereal vocals at the helm, he is establishing himself as an extremely new name on the scene.

So with the new single doing the rounds, we sat down with him to find out more about his background and what has been inspiring him lately.

No doubt it’s the guitar. The first thing I learned is the world's easiest song, the very beginning of “One” by Metallica which consists of like four notes and from there, I locked myself in my room and never left.

From what I noticed lots of kids grew up on Nirvana and Metallica but I come from a Mexican background so I grew up on romantic ballads in Spanish that my mom would play while she cleaned the house. But in fifth grade my friend introduced me to Iron Maiden, and it was the beginning guitar of that song “Wasted Years” that blew my mind and from there I was obsessed.

Wow I never bought it.. but I borrowed A hair metal album from a friend. The band was called “ White Lion” and it basically became mine because I never returned it.

What is one song you wish you could have written yourself?

That’s easy, that would be “Where is my mind”by the Pixies. The guitar in that song is beautiful, melodic and confusing at the same time. That riff is pretty hypnotizing and Kim Deal’s back ups give me the chills.

Do you have any habits or rituals you do before you start writing music?

I used to try and force myself to write stuff but now I’ve noticed that my most inspiring times are early in the morning when my mind is fresh. Sometimes though I go straight to my studio anytime I’m inspired by something or hear melodies in my head. I record them immediately because as imperfect human beings we tend to forget things. Always document ideas immediately before they leave your mind or else you will lose them forever and beat yourself trying to figure out what it was. You can also record yourself humming it on the Phone. I do that a lot.

What is some new music you find yourself listening to?

Shawn Mendes, just kidding. I usually listen to older stuff like The Velvet Underground but I’ve been getting into this electronic band from Germany that goes by the name of Moderat and this Portuguese dance/Electronic group called HVOB. Both those bands integrate very melodic elements. Their music gives me the happys.

Which artist would you like to have opened up for?

To be honest it would probably be the “Afghan Whigs” but during the peak of the band in the 1990s. Greg Dulli is the singer and he always reads my mind and writes about how I feel. He has this voice of a white boy trying to sound like a soul man and it really works. He slightly falls of key but he does it so beautifully.

What do you find is the most rewarding part of being a musician?

Well I’ve read somewhere that human beings are at their happiest when they are creating something. And that is very true when it comes to music. And being a musician you automatically are part of something that’s bigger than yourself. In reality most people look for that and want a purpose. It’s a cognitive exercise that keeps your mind occupied and away from negative thoughts. This is very helpful in dealing with mental illness. It’s definitely natural therapy.

What is the most frustrating part?

I guess that would be trying to get your original idea and making people understand what it is that you’re feeling and expressing through your art. A lot of Artists say it doesn’t matter and that it only matters what you think.But I think that There’s nothing like getting a very beautifully complex expression through to someone. I want to share what it is that I’m getting across. I want them to feel what I feel. It sounds a bit selfish but at the same time you're sharing something.

What is the best piece of advice you have received as a musician?

My ears and heart open up to those that are real and sincere. They have always stressed to me that being a musician is a way of life and not something to give you fame and fortune. It's not a phase, it's an extension of who you are. If you’re true to yourself and your art, all that stuff comes later if it’s meant to be.. If not, then keep doing it regardless because honestly.. What else is there.

Vic Da Looper's new single 'Bluff' is available to stream now. Check it out in the player below.

1 hour 34 min ago Following on from the release of their highly-praised 2020 sophomore LP 'So When You Gonna...', D

22 hours 30 min ago Having already found huge support for his run of releases over the last few months, progressive a