His new single 'Bend' ft. Anna Pancaldi is out now 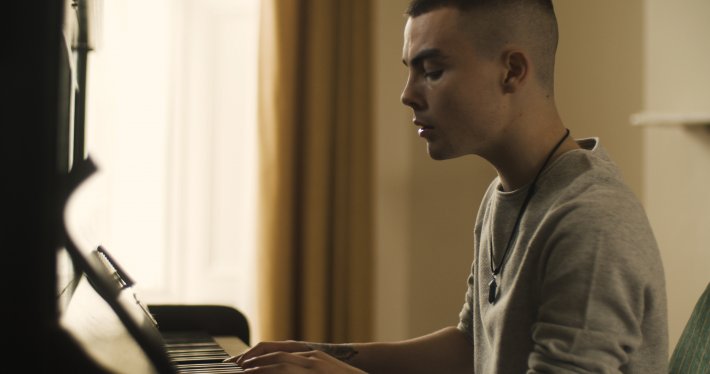 Following on from a flurry of bright and uplifting singles throughout last year, Irish singer and songwriter Curtis Walsh has now returned to deliver his latest euphoric delight 'Bend'.

Teaming up with fellow artist Anna Pancaldi for the release, 'Bend' sees the duo embrace a wonderfully warm and sweeping aesthetic. Filled with atmospheric production, subtle melodies, and their own beautiful voices spread throughout, this new release looks to see him continue the positive ascent we have heard from him so far.

So with the new single available now, we sat down with him to find out more about his background and what has been inspiring him most over the years.

The first instrument I fell in love with was piano. We had a really old Yamaha piano in my childhood home that I used to sit in front of for hours playing with its quirky sounds learning songs mainly by Adele at the time.

Growing up I was raised on very organic music with my mother blaring Emilie Sande and Adele and my Dad with the likes of U2 and Keane but when I was 12 / 13 years old I started to gather a taste of my own. I was listening to a lot of Ed Sheeran and Kings of Leon which i definitely would say influenced the first batch of songs I ever wrote.

The one song I wish I wrote is a very close call between Bohemian Rhapsody by Queen and Hey Jude by The Beatles. Both songs are complete masterpieces but it's close for me because of how Bohemian Rhapsody is like 10 different songs brilliantly combined to capture so many different emotions and vibes within the one piece of music and you never hear that level of complexity in today's music anymore. Then Hey Jude is just so hard not to sing along with, especially the last 4 minutes of the song when all the band sings is “na na na na" on repeat but yet never fails to keep your attention. Personally I think the melody they sing for those last 4 minutes is the catchiest ever written.

No I've no rituals or habits for writing music really. I try not to force a song out of me because i find if you write without really wanting to or if you’re just not in the mood at that moment you can hear it in the music. So I just wait until a melody pops into my head that excites me and normally build off it from there.

Two artists I'm really digging now are Mac Miller and Twenty One Pilots, both artists were on my list to eventually dive into and properly check out and from listening to a few songs by each artist recently I am raging that I never checked both out sooner!

It would be hard to put a number on it but I’d say it is touching over a hundred. At this stage! But one thing lockdown has taught me was to not pigeonhole myself into writing about the same things over and over. I've recently been trying to write my songs from unique perspectives such as the question of what happens after you die and what it might feel like to not feel, more hypothetical, deep questions rather than love or break up tunes.

The funniest moment for me was when I was supporting New Rules on the UK tour and at one of the shows I fell off stage and slapped off the ground. My team plus the whole crowd in the audience thought it was hilarious!

If I was to open for just one artist I'd say Ed Sheeran. For two reasons: 1 he was a huge influence and one of the reasons i started taking music seriously as a career, and 2 that the experience of playing to the size of one of his crowds would be so incredible.

When i was a teenager i boxed for a few years so i would have liked to see where that would have ended up if i didn't pursue a music career, then that or a home decorator.

The best advice i've received was to forget about everything that comes along with a music career and just focus on the music itself!

Curtis Walsh's new single 'Bend' ft. Anna Pancaldi is available to stream and download now. Have a listen to it in the player below.

13 hours 26 min ago After reviving the moniker near the end of last year, Nick Murphy has now announced a brand new a

13 hours 18 min ago After impressing so many with her brilliant debut EP 'Talk' earlier this year, fast-rising 17-yea