The artist's new self-titled EP is out now 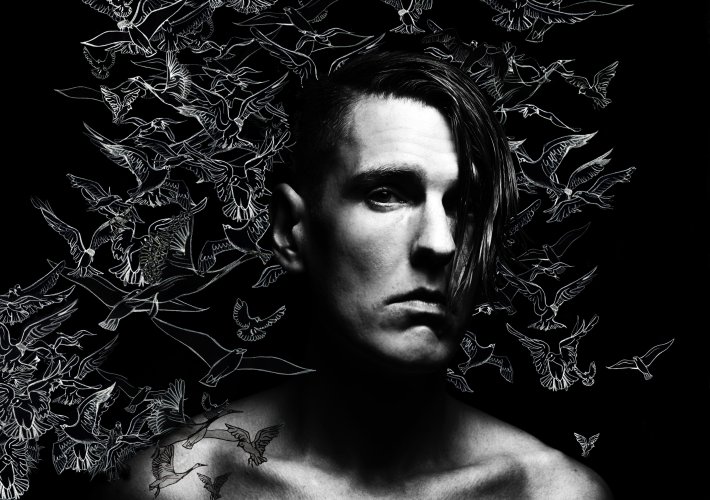 Working alongside his band and collaborating with special guests, 'Daníel Hjálmtýsson' makes for a bold and vivid introduction to the emerging artist. Channeling the dense and euphoric attitude of acts like Nick Cave & The Bad Seeds, this warm yet haunting new release certainly sets him up as a breathtaking new name on the scene.

So with the EP out and about, we sat down with him to find out more about his origins and what has inspired him most over the years.

I really fell in love with vocals first. Harmonies like The Everly Brothers, CSNY and Crooner, 50´s female groups. There was something so warm about it and I needed that warmth. After that came the hands-on instruments such as the electric guitar and piano. Drums! I remember I wanted to study sax when I was a young kid but got dealt an old clarinet to study music, before starting my relationships with guitars at age 10 and later, pianos. May latest obsession being synthesizers, as many and as variable as you can think of! I could go on all day about instruments.

My relationships, with myself, my life and others around me. Circumstances, choices (good or bad). Contrary to the stigma of rock ´n roll, getting sober has also opened up many closed doors within and allowed me to write in a way where I feel more free than ever, no strings attached, no sugar coating, just creativity and the freedom of expression. I got sober on my own and quit cold turkey and didn't do AA (with all due respect) so my meetings sort of became writing sessions and meetings with the self. Sometimes they were incredibly good and nurturing while often times they were excruciatingly difficult and rough. Lay it out and work it out in a song or a poem. Writing while I was loaded was like trying to run with a ball and chain, just wasn't working out. It just wasn't. Not for me nor anyone else for that matter.

I was really into grunge as a teenager. Nirvana, Soundgarden, Alice in Chains, Screaming Trees, Mark Lanegan´s and Chris Cornell´s solo ventures and everything in between. Having had the privilege to work with Alain Johannes on my debut EP (Alain did the mastering) was just a phenomenal honour given my history with the music he's made throughout the years. Not to mention the support we've received from Lanegan… just unreal.

I was/am really into the emotional take of The Cure, The Smiths, Radiohead, Prince, the swag of the Stones, softness of the Beatles, spectrum of Bowie, warmth of Springsteen, Pumpkins, Portishead, Tom Waits, Nick Cave, Nick Drake, Elliott Smith, Jeff Buckley, Joni Mitchell and Dylan, Neil Young and old country stuff (Townes, Blaze, Prine…). Deftones, Queens of The Stone Age, Tool and Nine Inch Nails, The Prodigy, Sonic Youth, Silverchair, Metallica, Dinosaur Jr., Interpol, Joy Division…A Tribe Called Quest, 2Pac, Dr.Dre, Chopin and Bach… Just really a little bit of everything and I usually spin all of this to this day. I wish we could talk about music all day but..we don't have all day… sadly.

These days I'm loading in my gear at the concert hall of an old fish factory-turned-cultural art center in a tiny fishing village in Iceland, called Stöðvarfjörður. There I'll finish some songs for 2021 releases and keep my band up to date via traveling the 700 km to Reykjavik when I can and via the internet. I am using an old Tascam 4-track recorder to make demos on cassettes and sending them in the mail to my band. We then meet up to jam and arrange. I´ll also be making digital copies for us, as the method of cassettes through physical mail might not fit into the state of things in 2021 (haha). Even though I find the method romantic and in a way, more giving.

The surroundings of the East fjord mountains, the Atlantic, the waterfalls, the valleys, the wildlife, the intense darkness and the struggle of daylight and the inconstant weather report, blizzards and the frost, all bring something to the table when making my music. I wrote the EP in my old apartment in downtown Reykjavik with Hallgrímskirkja banging away in the background so the scene´s a bit different now. I do like to turn to nature for inspiration, take long walks and come up with melodies. Mt.Esja has just now been replaced with a collective of mountains. Everywhere you look here is inspiring in its own way. Sitting alone at cafés is also quite inspiring, as all kinds of stories are evolving around you and talking to you. I wouldn't consider myself a loner but I do like to experience things on my own. In general I like to have a bunch of instruments around me and lots of coffee. That can be very inspiring in many ways. I usually write the songs alone before bringing them to my band to arrange and craft a complete song for recording.

I really like my fellow countryman´s, Ólafur Arnalds, new album. Really recommend that one for mental clarity in strange times. That's been on repeat. The new Mammút, also Icelandic and also great and a bit trippy and dark.

The past weeks have then been coloured by Brian Eno's Music Before And After Science, Mínus´Jesus Christ Bobby, Lyenn´s newest one (who plays on the EP), Mark Lanegan´s latest LP and his amazing book. I´m also getting cozy with Trent´s and Atticus´new score for Mank, now on Netflix. They always amaze me. Max Richter has also been a favourite during the evenings with the ever faithful Townes Van Zandt.

In truth my past usually haunts me. Although I embrace it and cherish it, while trying to come to terms with it and move on. It is a part of me and bleeds into my lyricism and music, sure. My song “Withered” is the perfect example for this. I don't wish to forget anyone as they are a part of the journey I´ve taken and all play their part in making me who I am today. For better or for worse, I accept and usually take something with me from those experiences.

As it's the holidays, I remember a (funny) moment where I was scheduled to play this live Christmas TV/radio special at RÚV (The Icelandic National Broadcasting Network) a few years back. Great lineup of local singers getting together before the holidays. There was a mild blizzard and I, (along with my band at the time) landed in a huge traffic jam due to a few cars sliding into each other on the freeway (no major injuries) a few kilometres from the station. Realizing we wouldn't make it unless we’d make a run for it, we split up the gear between us and started running. We had about 15 minutes to make it to the station, get set up and take a few questions from the host before performing. The snow and wind made it difficult for us to keep our gear from getting wet and the cars around us must have heard the host on the radio talk about us maybe not making the broadcast, so they started honking at us and cheering us on (hilarious).

We must have looked like a bunch of clowns that just got out of their clown car, awkwardly and chaotically making their way to the circus tent… in a blizzard, wearing tuxes.

We finally managed to get there, and I had to rush to a sit down with the hosts, that had been calling us frantically for the past few minutes, before taking the stage. Heart racing, slumping into a laid back cover of “I´ll Be Home For Christmas” and trying to catch your breath at the same time on a live national broadcast. I got a commercial break after the first song for Christmas that year. Sounds like a corny holiday music video we won't be making.

I have a Bachelor's degree in teaching social studies, science, physics and biology and I've been doing that for about 10 years now along with my musical work. Having an education in another field has proven vital to providing for my family, especially during this past year. Teaching teenagers and working with hundreds of personalities throughout the years has also helped me grow and evolve as a person and as an artist. They're awesome and it's a privilege to be able to help young minds evolve. If I wasn't teaching and making music, I´d want to study art, design and creative writing. Or at least I plan for a further education but I can't imagine my life without music. That is just absurd to me.

Write and express yourself. Do what comes to mind and don´t think about it too much. But if you´re going to do something, do it in the best possible way you can. Be mindful of the fact that you are making music for you and to express emotions that you are feeling. This is your thing and your outlet. Not running in circles, finding ways to create something that others will love and not you. Being enslaved by codependency, anxiety and grieve.

The fact that people like your music and connect with it is the icing on the cake and makes everything sweeter. But you need to stay true and unafraid. Take risks and try out new things. That's what I try to teach my students, to be themselves and not be afraid of what others might think of them. Create from their fears and conquer their doubts. Challenge themselves and seize the moment. Will power is a beast. Do what you want and what you wish, as long as it does not harm you or the people around you.

Daníel Hjálmtýsson's debut EP is available to stream and download now. Have a listen to it in full via the player below.

2 days 17 hours ago After making a huge impression as solo acts over the last few years, critically-acclaimed pop pow