Getting To Know... Empty Banks

Getting To Know... Empty Banks 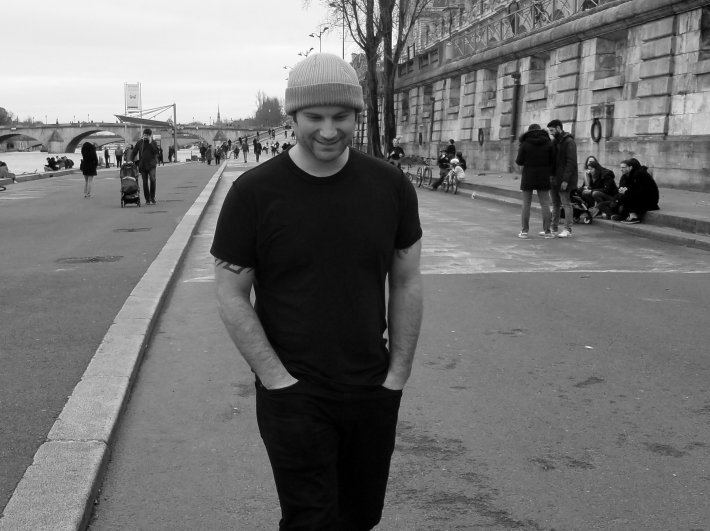 After spending the last few years traveling, busking, and finding a stage wherever he can, singer and songwriter Bryan Tayls aka Empty Banks has now returned to follow up his wonderfully blissful debut single 'Where We Go' with the equally euphoric offering 'Objective Views'.

Originally from Kansas City but now residing in Paris, he returned to his hometown to record his latest release, which sees him couple lo-fi indie-rock aesthetics with a soaring and ambitious intention. Tayls' bright and penetrating vocals pierce this new composition with a strong and vibrant feel, making his latest track a truly beautiful listen.

So with the frontman's profile rising fast, we sat down with him to find out more about his influences and what inspires him as an artist.

My first instrument was cello. My primary school let you play stringed instruments in grade 4 and all other band instruments in grade 5. My mom/mum always wanted me to be a saxophone player so she tried getting me to wait one year to start sax, but I was too stubborn and wouldn’t wait to just start playing something. The day came when we got to choose which instrument we wanted to play, still up to that point I didn’t know what I wanted, but the cutest girl in the class went before me and chose cello… so I knew what I was going to choose. Without that cello, I don’t know if music would have ever taken hold of me or if I ever would have picked up a guitar.

It’s two things for me. Honestly and completely it’s that I want to do good in the world. There is so much that we can do for each other and I just don’t understand people who have the means to help but just sit on it. You see stories all the time about the richest people in the world and how they could solve world poverty or hunger seven times over but do nothing except accrue more wealth. Even if it isn’t completely solving these issues, I just can’t comprehend not doing anything. It’s why I’ve committed that a portion of anything I ever make will go towards helping others and making the world a better place for whoever I can. Within the same world of helping people, I hope that people can listen to my music and think about the world or situations in a different way than they have previously, and see some light, even in the bad. I’ve been in some low and dark places, where sometimes I didn’t know if I would come out of. I’ve come to learn that no matter the circumstance, good or bad, it’s always exactly where I’m supposed to be... just tough it out and you will always come out better than before. Nothing in life is permanent so hold on to the good and know that the bad will pass.

Secondly and more selfishly, I’m so captivated by people who have achieved things in their lives that no one else can say they have done. People like The Beatles, Albert Einstein, Amal Clooney, etc. Thinking about what was going through their heads at the time and looking back on it is absolutely intriguing to me… what I wouldn’t give to sit down with Paul McCartney or Barack Obama to try to understand what was going on through these times, currently, and how they’re looking to the future. All these people have done things and lived lives that not many can stand parallel to. In no way whatsoever would I place myself next to any of them, but I strive to live a life and achieve something less common to society’s norms, and to hopefully one day put myself in a position to help others the way so many other great people have.

Early on, I only listened to classic rock and country. The only musical listening influences I had were my parents. My parents growing up in the 60s and 70s had all the amazing music from those eras so ingrained in them that it transferred to me. Anytime there was music playing, it was all Elton John, The Beatles, CCR, The Who, Van Morrison, Rod Stewart, Led Zeppelin, I could go on! I don’t know where the country music came from. I shared a bedroom with my sister and we would always argue over what radio station would play when it was bedtime. Me with the country and her with the pop and alternative. It started to wear on me until I was choosing alternative radio as well where I heard different worlds of music and was introduced to Greenday. Greenday absolutely opened my world to music of all types from punk to hip hop, pop, indie, gospel, etc. and I keep all those influences with me to this day.

I have a couple playlists on my Spotify profile that I always go to that highlights the music I’m always listening to. One playlist is called Everything and one is called The Shortlist. Everything is obviously all the music over time that has really affected me in one way or another. The Shortlist is them music that I’m currently obsessed with. Sometimes you’ll see that list changing from folk to punk to hip hop to alternative.

I love people and have made so many connections with so many people along the way of my life. I can only think of one song that isn’t written about someone who impacts my life in one way or another. I have songs about politics, relationships, travel, social issues and more, but no matter the situation, they all relate to a connection I’ve made somewhere along the way. So no matter the subject of the song, almost every situation, good or bad, is connected with a person. That person is even myself in some of the songs, but whether it’s directly or indirectly about them, every song is about someone. I love the journey and can’t wait to see what other connections I make through life. The one that’s not is about booze.

Every opportunity I get to perform is another great memory. To say any one memory is the best is extremely hard to pinpoint because it’s all such an experience. With my old band, we played hundreds, maybe thousands of shows over a few years run, and every one of them is such a great memory. Every show from playing festivals, packed houses where you can barely move, as well as the ones we ended the night in arguments, played at ex-strip clubs with a pole between me and my keyboard player, and so much more. Going through and thinking back on all the struggle to get booked, to getting regular gigs, and to having people start contacting you to play shows, it all builds such an experience that I wouldn’t trade for anything. Now I’m starting over with Where We Go being my debut release, busking and finding stages where I can, and I can’t tell you how excited I am to see where this journey takes me.

I don’t know if I would have known to take this path if music were never introduced to my life because I was pretty young and dumb when I was in school, but now, if not a musician, I would want to be diplomat. I’m amazed by the people who can just switch their brains from one language to another flawlessly, and use that skill to go to amazing places and do amazing work. I wish I would have studied language from a young age, and later international relations to be in a position to work as a diplomat somewhere in the world being able to work for the good of the people or to improve relations between countries. It must go back to my desire to do something good for the world and live a life less lived, but I would hope that I could have had the insight back in school to shoot for these things.

Empty Banks' new single 'Objective Views' is available to stream and download now. Have a listen to it in the player below.

4 hours 32 min ago Following up the release of his highly-praised debut EP 'Blood Harmony' last year, FINNEAS is bac

7 hours 50 min ago Following on from previous releases ‘Cherry