The band's new single 'The Drummer's Trauma' is out now 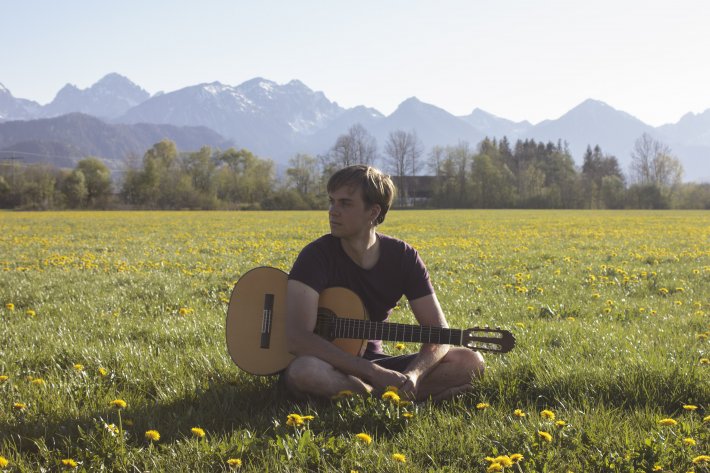 With a rich and diverse array of warm folk-pop offerings under their belt already, German outfit Grizzly Bird have now returned with their latest uplifting gem 'The Drummer's Trauma'.

Led up by Berlin-based musician Hans Gnendinger, the group latest work makes for a wonderfully bright and enticing return. Bringing traditional folk aesthetics and blending them with a bold and euphoric direction throughout, their sound has this beautifully textured quality that sets them apart from so many right now.

So with the single out and about, we sat down with Hans to find out more about his origins and what has inspired him most over the years.

That must have been the violin, as that's what I chose to learn when I was 8.

I ditched the violin for the guitar when I was 15 and started a rock band with two friends who also just started to learn their instruments. I started to write songs because I thought that's what you do when you're in a band. It probably isn't for most people, but what did I know?! That doesn't answer your question, but I don't know the correct answer. It's such a long time ago!

That's equally long ago, but way easier to answer. “Kick Up The Fire, And Let The Flames Break Loose”, the second album by The Cooper Temple Clause, is what really opened my mind to what music can do, how music can be. And although the band is completely forgotten by most people, it's still such a good record. It's so sonically rich and combines so many styles. I searched for more music like that and loved The Mars Volta, Oceansize, Dredg, Aereogramme. Later I discovered people that make equally challenging, adventurous music but without heavily distorted guitars: Joanna Newsom, Patrick Wolf, Ólafur Arnalds's first album, John Frusciante. The last album that refined my taste just before I turned 20 was “April” by Sun Kil Moon. What a beautiful, timeless piece of music!

Like pretty much everyone else, I loved Phoebe Bridgers' new album. Jesca Hoop keeps releasing amazing music. I spent a lot of time listening to the other artists from my label collective, The Famous Gold Watch Records. I was so blown away by Mone's music that I asked her to sing on my new EP. And listening to Rosa Tu's music makes me feel like she's an old friend, even though I haven't met her outside of Zoom meetings.

Lots! My very first album, never intended for the public and only given as a gift to friends, was a kind of concept album: every song was inspired by a person from my hometown. Looking back, some of it was quite mean. Why would I sing those things about my friends?

My fifth ever public appearance was as support at Zitadelle Spandau. one of Berlin's biggest venues. I was such a beginner and I played the same stage as Björk or Portishead. It was unbelievable! And the audience was rather lovely. I sold a lot of CDs! That was 2011.

Elbow! I love them and they're still around. I keep talking about things that were ten years ago for some reason. Hey, I'm releasing a new EP called “Somewhere Between” and I'm already beginning work on the next Grizzly Bird album!

I actually wanted to study biology but got rejected, so I studied music. I think I would've been happy as a biologist studying animal cognition. So much so that the first Grizzly Bird album “Empathy" is a concept album about animal cognition.

Taking vocal lessons! My voice sounds so much better now than when I started. Shout-out to my vocal teacher Meryem! She makes wonderful music with her band Coucou.

Grizzly Bird's new single 'The Drummer's Trauma' is available to stream and download now. Watch the video for it in the player below.

2 hours 42 min ago Following on from the release of their much-loved effort 'Choose A Life' late last year, Wings Of

Getting To Know... Makh

1 hour 20 min ago After breaking through with his much-loved debut single 'You What' last year, Bradford-based arti