Getting To Know... Kafka

Getting To Know... Kafka

The band's new EP 'The Biggest Time Bubble' is out now 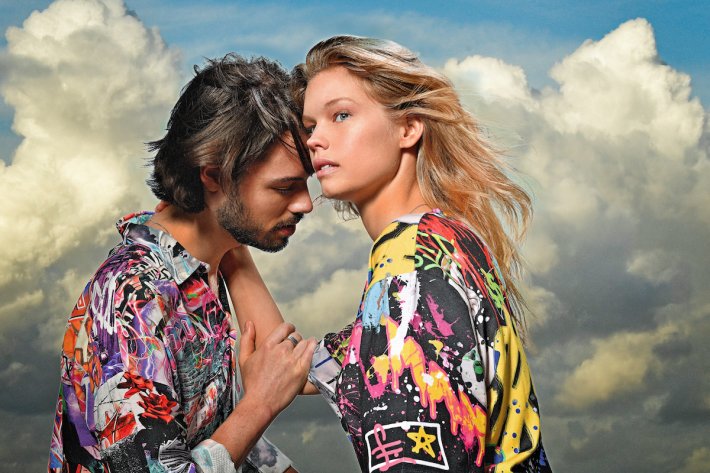 Channeling a rich and diverse energy throughout, 'The Biggest Time Bubble' makes for a wonderfully upbeat introduction to the pair. Filled with eclectic instrumentation, a laid-back atmosphere, and some beautifully euphoric hooks, this is the perfect accompaniment to unwinding after a long day.

So with the EP out now, we sat down with them to find out more about their origins and what has inspired them most over the years.

Dafne: For me it was the piano, although I didn’t fall in love until I was fourteen. I had my first lessons when I was six, but I found it quite boring. My mom forced me to go there because she said my fingers would only develop before a certain age. When I was fourteen, I got a different teacher. He was a jazz piano student, always late because he had a hangover. I found him cool. He taught me how to improvise and inspired me to compose, and all of a sudden the piano was my ticket to freedom.

Frank:  Well, it wasn’t really love at first sight, to be honest. My parents wanted me to join my little sister on guitar lessons, because she didn’t dare to go alone. After one year of lessons I became better than my sister, without playing one note at home, while she was very disciplined and rehearsed every week. That’s when it started to get fun. The love came when I wrote a song for the first time, I was fifteen and my mother got very ill. The song was called Scream to Heaven. I think it’s very good that no-one ever heard that song, but I fell in love immediately. I never felt that way before. I remember looking at my guitar and thinking: ‘You are not gonna get rid of me.’

Frank: When I left my family home and started living in Amsterdam, I got a record player. I always loved to come home late in the evening and pick one record to listen. In those days I didn’t have a lot of records, so I listened to the same ones over and over again. Of course I have Spotify now and listen to all kinds of music all the time. Balthazar, Bright Eyes, The Villagers and Big Thief for instance. But I think the eight records in those important years of my life will stick with me forever and made me the musician I am today. Little Criminals - Randy Newman, A Night at the Opera – Queen, Grace - Jeff Buckley, Bon Iver - Bon Iver, Closing Time - Tom Waits, Figure 8 - Elliott Smith, Close to Paradise - Patrick Watson and Paranoid Android – Radiohead.

Dafne: I was everything but the average teenager. The first two years of high school I was a nerd, but the kind of one that really didn’t notice it. I wore hiking shoes, still played with dolls and Barbies and I listened to classical music, Kate & Ann McGarrigle, and Turkish and Icelandic mystical singers. Last but not least, I was a great fan of Riverdance. I remember the day I found out that literally all the children in high school listened to something called ‘top 40 music’ and raised their eyebrows when I told them what I listened to. That same afternoon, I went into town to buy my first cd: the top 40 hit songs of that year. ‘Whenever, wherever’ was where popular music was and I shook hands for the very first time.

Frank: As a teenager I listened to a lot of rock music. I guess that’s what happens when you grow up in the 90’s. Dire Straits, Queen, Guns ’n Roses and Radiohead; still my guilty pleasures. I always used to be kind of proud of the fact that I didn’t listen to Nirvana and Queens of the Stoneage, while all other musicians and bands I knew at the time were trying to copy them. Unfortunately, I discovered a few years after that, that Nirvana and Queens of the stone age are amazing and much cooler than Dire Straits.

Dafne: I cannot remember not making music. I sang and danced before I could talk or walk. Making music is a way of expressing myself, it is like breathing. I need it. Seeing someone making music or singing, is enough to make me want to do the same.

Frank:  Day to day life I guess. There’s so much to see and hear and feel all the time, all day long. Every day. Sometimes I wonder how people survive without making music. It’s the way I process things. It’s the best way to feel how I really feel, the easiest way to relax and the one thing I love doing the most. Creating music is searching for the rhythm, the melody and harmonies that suit your feelings exactly. When you find that exact combination, it’s like meeting someone that fully understands and accepts you. It’s love.

Dafne: We have a different taste of music, but there is a lot where our preferences come together. The first time we visited a concert that struck us both, was a midnight concert of Patrick Watson. His music is insanely good and he and his band were in top shape, they were accompanied by a breath-taking orchestra. Also, we currently listen to bands like The Villagers, Sufjan Stevens, Massive Attack and Angus & Julia Stone.

Frank:  I have been listening to Mac Miller a lot lately. I really love his latest, and unfortunately last, record. It’s produced by Jon Brion, I am a huge fan of his work. The Billie Eilish record is amazing as well, of course. I guess that’s starting to become common ground. I love it. And everything Bon Iver makes, he’s ahead of his time I think. A bit closer to home is the new record of Nana Adjoa, a Dutch friend of mine. It is very very pretty as well.

Dafne: Not that many actually. When I wrote for my previous band Zazí I always took a point of view that would appeal to all three of us, since we mainly sang close harmony. When we write songs for Kafka, we do write about people in our life. Besides, we’re a couple and we’ve been through all layers of love together. So why not sing about it together.

Frank:  I wrote a lot of songs about the death of my mother, almost four years ago now. I recorded five EP’s in Dutch and still write a lot of songs about it. Some of the Kafka songs are about her as well. That feeling of absence and love at the same time is enough for a lifetime of songs. I’ve also had the honor to join a couple of projects and theatre plays in which we visited people and wrote a song or a text while talking to them. It’s the most wonderful experience I know: meeting people and talking about their lives and their struggles, hearing their stories and then being allowed to write a song about that. I promise you, every single person has got a beautiful story to tell. Sometimes you have to ask and wait, and ask again. But it’s there. And it’s mind-blowing.

Dafne: I once played a theatre show with Zazí, the whole show was building up to one dramatic ballad at the end of the show. One evening, the first notes of the song started to play and I felt a huge sneeze coming up. I tried to suppress it and started to sing, standing there in the spotlight. At the end of the song, I couldn’t stop it from coming any longer and I sneezed loud and without glamour. People laughed their asses off. My band mate was obviously very annoyed the spell was broken and I was ashamed because I thought she had seen me doing it. But right before she started up the next song, she looked at a man in the audience with fury and said: can all you please be silent now, especially that man with hay fever!

Frank:  Making and releasing your debut album and planning the first shows and tours. Starting to feel like nothing can stop you. And then facing a pandemic that cancels all your plans. That feels kind of funny.

Dafne: I would love to open a show for David Byrne. His shows are insanely good, and very different from any act that would open for him. Opening shows can be uncomfortable sometimes because you really don’t want to steal any thunder from the main act or be compared with it. With David Byrne that would be impossible. Also, I’d love to casually walk by and high five him backstage.

Frank: Gwen Stefani. Because she is Gwen Stefani and I am secretly in love with her. Don’t tell Dafne. Oh and any show with Pharrell Williams or Bruno Mars.

Dafne: When I was little, I wanted to be a writer. I used to write a lot when I got home from school, I could sit behind the typewriter for hours. I still think that would be a path I could’ve taken, but somehow I became more restless and in need of social contact since I was twenty. I don’t know if that has anything to do with smartphones, internet or social media, but whatever the cause, nowadays I would become too lonely if I’d be a writer. I remain curious about that path, though.

Frank: When I was young, I secretly wanted to be an actor. I never dared to tell people, ‘cause I didn’t have the guts to really act in front of people. The one time I dared to audition for the high-school musical, I was casted for Romeo. But then… I ended up cancelling it in a letter to the director. The play was delayed to the next school year and I felt sick and ashamed of it and worried it was going to be a disaster, so I quit again. I still feel guilty towards that teacher. I think that was the moment I decided that acting was not for me.

Dafne: Somewhere I got the idea that there is a ‘right’ and a ‘wrong’ in making music. That you’re either good or bad at it, so I just stopped writing. Frank broke down this fear and told me to just start somewhere. He told me to sit down, tuck away my phone and just start with a tune or a sentence. It doesn’t matter if it’s going nowhere. It got the weight off my shoulders.

Frank: Listen. Just listen and look around. It’s everywhere, all the time. You just have to organize it. Oh and try quitting alcohol, because it isn’t helpful, believe me. You can do so much more than you think you can.

Kafka's new EP 'The Biggest Time Bubble' is available to stream and download now. Have a listen to it in the player below.

7 min 16 sec ago Following up the huge success behind his recent single 'Gone' in recent months, James Vincent McM