The band's new single 'TV' is out now 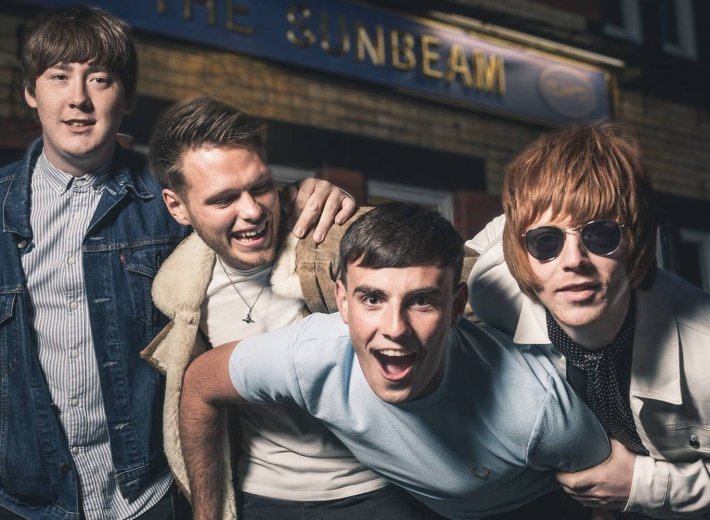 Since forming in 2017, The K’s have gone on to sell out Manchester’s 1,500 capacity The Ritz, play blistering sets at festivals such as Kendal Calling and Neighbourhood Weekender, as well as Exit in Serbia and Croatia’s INmusic, and have now returned with their blistering new single 'TV'.

Channeling the bold and energetic vibe of acts like Circa Waves and Sea Girls, 'TV' makes for an incredible return for the four-piece. Filled with pulsing riffs, killer hooks, and a brilliantly catchy chorus, expect to be humming this one long after you've first heard it.

So with the new single doing the rounds, we sat down with the band's frontman Jamie Boyle to find out more about his background and what has inspired him most over the years.

Weirdly enough it was actually the drums! I got a drum kit for my birthday when I was about 11 or something like that. I played for a few years but as I got properly into music as I got older I knew I wanted to be a guitar playing front man. I idolised (and still do) the likes of Weller and Strummer.

I’d have to say Weller and Strummer again! They’re probably the most prominent but as a band we’ve got such a wide array of influences and inspirations. Goes from us all buzzing over The Talking Heads to the lads moaning at me to turn Billie Eilish off in the tour bus, and every scenario in-between!

The same sort of stuff really. We were normal teenagers drinking over the park every Friday and that, but we’d be there in shirts and desert boots whilst everyone else would be in trackies and 110’s! Those were the fuckin days.

It starts off as just a way to express yourself, I think. I don’t think that will ever change, but when you get bigger and better it becomes more than that. Dont get me wrong - no matter how big we get we’ll always just be 4 mates smashing out tunes we’ve wrote and love. But we’re now in an amazing position where we can inspire so many and effects so many peoples lives through doing what we love and we’ll always be grateful for that.

I think Sports Team's debut album is absolutely mint. That came out earlier this year and I’d say its my favourite this year. I have a massive array of genres and artists on my playlists, but I’d say if there was one new one I haven’t always listened to it would have to be them!

Every song is about people in my life. I don’t know how anyone writes in any other way and, to be honest, I think that’s a massive problem with new music at the minute. People seem to write about just whatever they think they should be writing about or what a song should be written about instead of it being real and authentic to themselves. Even if its not obvious sometimes, every song I’ve ever wrote is about the people and places in my life. I think that’s why people relate to the tunes, they know we mean every word we say!

Every time we're on the road we're in stitches, usually laughing at Dexter's new hair cut or how many professions our carer Snaffers has. A funny memory for me was Jamie and Dexter getting a cup full of my piss in their faces on the M6, I think they will agree it was kind of funny now! Would be impossible to choose a funniest memory!

Difficult one that as I've just about scraped through life blagging to be a musician! I'd have a dabble at being a pilot or something, travel the world getting paid and get to bounce through the airport like you own the gaff!

“Just keep doing what you’re doing.” People can see what we’re building and know if we carry on the sky is the limit!

The K's new single 'TV' is available to stream and download now. Watch the new video for it in the player below.

11 hours 5 min ago Following on from an impressive array of releases over the last year, Maisie Peters has now retur

10 hours 58 min ago After making a huge impression as solo acts over the last few years, critically-acclaimed pop pow