Getting To Know... Leif Coffield

Getting To Know... Leif Coffield

His new single 'Say My Name' is out now 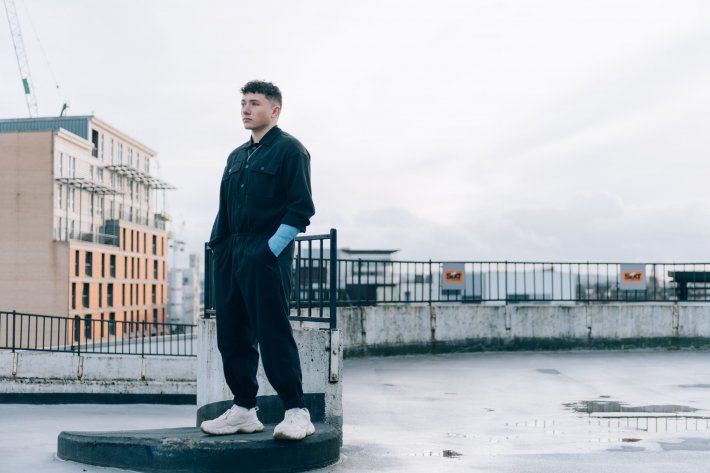 Having already received huge amounts of praise from the likes of Clash, BBC Radio1, and BBC 6Music for his previous efforts, Glasgow-based artist Leif Coffield now returns with his breathtaking new single 'Say My Name'.

Channelling a dark and pulsing alt-pop attitude, 'Say My Name' stands a truly distinct sound arriving on the new music scene today. Jam-packed with textured production, a brooding atmosphere, and his own intoxicating vocals at the helm, his newest release looks set to make some serious waves in the months ahead.

Guitar all day. We always had guitars lying around our house as my Dad plays, as do other members of my extended family. I think I first started learning when I was around 8 ish… little did I know this would be the tool I’d use to CONQUER the school talent show.

I was obsessed with death metal and specifically Children of Bodom throughout my early teen years. Anything heavy and it would have me by the dangly bits. When I was 14 I cut my dreads and started unashamedly conventionalising myself, and around that time dubstep was becoming quite the thing. Metal to dubstep also seems like a natural progression. I feel like dubstep is to electronic music what metal is to rock music.

Either ‘Sultans of Swing’ by Dire Straits, or ‘Piano Man’ by Billy Joel. Dire Straits just nailed that song so hard and it’s such an amazingly written piece of music that I never get fed up of listening to it. ‘Piano Man’ style songwriting is almost a lost art, where the song literally takes you on a journey through a particular scene in the songwriters head, and tells a story. It’s hard not to listen to ‘Piano Man’ and see very vivid imagery.

Not really. Not anything further than just the typical building blocks to writing a song, which for me is just starting off with an idea for either drums or lyrics or instruments. I suppose something I do often though is to think of what the sonic ‘hook’ will be, and what organic sounds I’ll record from my bedroom: plates, pen scribbling etc…

I’ve been loving an artist from South Africa called ‘Sun-El Musician’ who’s style just sounds so serene and afrobeat-y that it’s difficult to listen to without being transported to a musical safari. Royal & The Serpent too has made some banging tunes that are right up my alley. Her track ‘Choke’ is a killer.

Ummm… all? They’re either legitimate stories or absolute dramatisations and fantasies, but they’re all rooted in truth about people in my life.

Fortunately or unfortunately I’m too early in my career to have had any noticeable ones, as it was only early in 2020 I started releasing the style of tracks I’ve been working on for a good while. So hopefully once the coronavirus flipz off then I’ll have plenty of time to embarrass myself.

Right now it would be between Kanye West, or Billie Eilish. They’re two artists that have art ingrained into their work and their creativity is on full display at their live shows. To be a part of that on that scale would be unbelievable.

Aside from music I’d say maybe something in skateboarding or if I could tame the ADHD for four years then I’d possibly study something to do with economics or psychology at university. But then again probably not because… dopamine?

There’s been no one all encompassing formative piece of advice but a collection. But I would say some advice I received from a British Australian mastering engineer called Klaus Hill was a turning point for me, and that was that I should take a break from releasing [what I was releasing at the time] and to work on creating a ‘sound’. After this I took a break for 3/4 years just making music and honing my skills as a producer and songwriter.

Leif Coffield's new single 'Say My Name' is available to stream and download now. Check out the new video for it in the player below.

2 days 6 hours ago After spending much of the year releasing a batch of highly-praised new material, James Vincent M