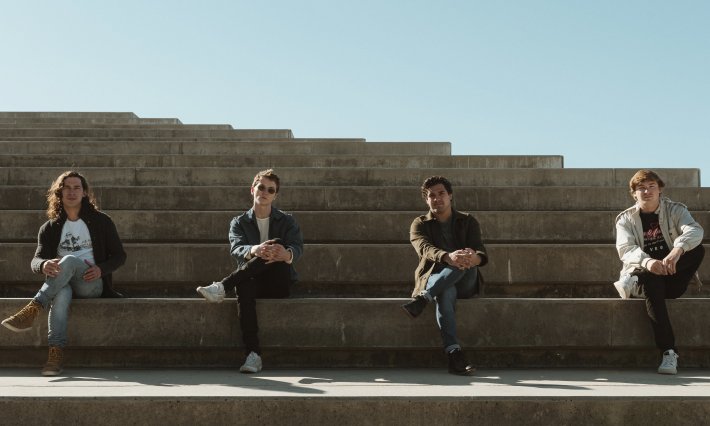 After spending the last few years delivering a rich and vibrant collection of indie-rock belters, US outfit Lenox Hills now look to do it all again on their latest jam 'I Feel It Coming On'.

Channelling a mix of fresh indie-rock aesthetics with some supple grooves throughout, 'I Feel It Coming On' sees the group return in stellar form. Filled with a vibrant atmosphere, killer hooks, and an incredibly catchy chorus, their newest release will be one to have on repeat again and again.

So with the new track available now, we sat down with the group's vocalist and guitarist Luke Mullin to find out more about his background and what has inspired him over the years.

The first instrument I fell in love with was actually the bass. I was a big Kings of Leon fan and I was always really intrigued by Jared Followill’s basslines. I started off by trying to learn all their songs on bass then moved from them to Radiohead. It got to a point where I was starting to write songs on the bass, which is pretty much when I decided it was time to pick up a guitar.

I would say the most prominent inspiration behind our music has got to be Pixies. While we are heavily influenced by bands like Radiohead, Kings of Leon, and Arctic Monkeys, I’ve found that Pixies has influenced all the bands that have played a role in the development of our sound. I’ll never forget being 16 years old listening to their song “Hey” and thinking “I want to write a song like that one day.”

I’d say I listened to classic rock the most as a teenager. Especially Led Zeppelin and Tom Petty. My brother (who is also in the band) and I grew up on classic rock because of our dad, but it wasn’t really until we got to high school that we really came to appreciate them for the badasses they are!

The best environment for me when it comes to finding inspiration tends to be when I discover new music. New music is always a good way to gain perspective and find avenues in your own music that you probably wouldn’t have been able to find otherwise.

My favourite artists at the moment would probably have to be Briston Maroney and Spacey Jane. Briston is a singer-songwriter who plays rock n’ roll, which I love. I also think his lyrics as well as his compositions are always unique and creative. Spacey Jane is an Australian alternative rock that has more of a beachy, in your face sound, but it has to be some of the most fun music I’ve heard in a long time.

Too many to count! Looking back though, I’ve found that writing songs about people who’ve hurt you can help with finding closure, and usually leads to a point where you realize maybe those people aren’t so bad after all. It has helped me forgive a lot of people from my past.

Honestly there are just too many I can’t pick one.

It would probably have to be Kings of Leon or Arctic Monkeys. Those are the two bands we were listening to a lot when we started the band so it’s gotta be one of them.

Well I am currently in school getting a finance degree so I’d probably go into banking or maybe law school, but I would much rather play music for a living.

The best advice I’ve received as a musician is to always serve the song. It can be hard when you have four people vying for parts but the most important thing to remember is that writing good music is the priority.

Lenox Hills' new single 'I Feel It Coming On' is available to stream and download now. Have a listen to it in the player below.

1 day 11 hours ago Following on from an impressive array of releases over the last year, Maisie Peters has now retur

1 day 11 hours ago After making a huge impression as solo acts over the last few years, critically-acclaimed pop pow