Getting To Know... Mark Loughrey

Getting To Know... Mark Loughrey 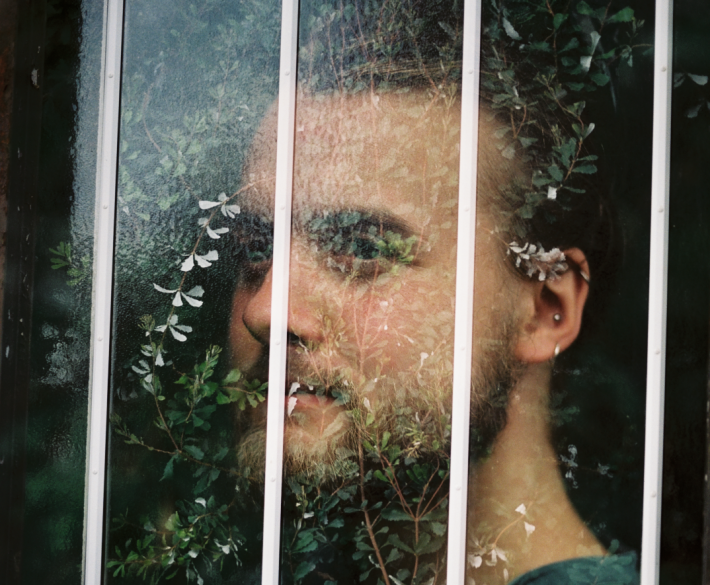 After spending the last year releasing a breadth of bold and enticing offerings, Berlin-based singer and songwriter Mark Loughrey has now unveiled his highly-anticipated new EP 'On Through The Veil Anew'.

Featuring the previously shared singles 'Nothing On A Truth' and 'The Snake With A Tail For A Mouth', 'On Through The Veil Anew' makes for a wonderfully warm and inviting collection. Jam-packed with euphoric melodies, soaring production, and his own calming vocals throughout, this new release is a rich and atmospheric delight that simply never ceases to captivate.

So with the new EP available now, we sat down with him to find out more about his origins and what has been inspiring him over the years.

Wish I could say something cool like the Bulgarian goat bagpipes but it was the guitar. I begged my neighbour who played in pub bands to teach me Green Day songs when I was 11 but of course I never really practiced and was terrible for ages.

Probably the uncertainty of the world, wildly differing perspectives as well as grander forces at play like rituals, myths, death, or even weird news stories that I can’t get out of my head, like people falling in love with inanimate objects.

I used to be one of those insufferable little know-it-all’s who had no patience for anything without guitar solos, but I grew out of that thankfully. In teenage garage bands, often we played covers of The Strokes, Weezer. Foo Fighters etc. Speaking of Weezer, I used to listen to the Blue album by them nearly every night before I fell asleep during high school.

Often I don’t find the geographical environment around me too important to write songs in, but I do think inspiration requires first that to get yourself into a headspace where you become a bit like a magpie, snatching words from the air so that you can steal them for your songs.

As long as the words are flying around your head, be they from books, poetry, conversations or even off-the-cuff remarks made over the phone, inspiration and musical ideas are never too far behind.

My friends! One of the most profound pleasures I’ve found in this life is having had the opportunity to meet and witness the musical growth of the cast of characters that I’ve met along the road. Usually with their songs you see a side to life that everyday conversation just can’t quite illustrate in the same way and this inspires me to no end.

For example, friends such as Joel Harkin, Joshua Burnside and Junk Drawer all released amazing albums recently that have sound tracked a lot of the year for me.

I’m way too stubborn to give the people I’d rather forget the satisfaction that I’ve dedicated a whole song to them, haha. However, I do think several folk scenes could benefit from the Soundcloud rapper approach by having more diss tracks and rivalries to sell records. Spite, as they say, can be a great motivator.

Well I go back and forth between funny and cringe with this memory. A few years ago, I was playing bass and doing backing vocals for a folk band in Belfast that had quite a dark sound and often more morose subject matters in the songs. For some bizarre reason, we randomly got asked to play at a wedding, which was a bit more of a private family affair in the couple’s back garden in the countryside.

To be honest, we didn’t really practice for this and came straight from a night of heavy drinking at a local festival which wasn’t too far away. During the set, our singer and frontman (who often told dark stories between the songs) didn’t adjust his stage banter at all for the occasion, so it was super grim.

For example introducing songs about missing children while actual living children were running around the garden, was too much for me. Also, one of the guitarists broke more and more of his strings as the set progressed and didn’t have any spares, so at the very end he just had two left, so overall it was abominable.

It was one of the only times I’ve ever felt simultaneously happy and ashamed to have been paid a decent amount for playing a live set. Sometimes I look back at it with complete bewilderment and amusement at its absurdity, but so it goes.

Andrew Bird or Sufjan Stevens, two massive musical heroes of mine, although I’d know I’d embarrass myself within two minutes of meeting them.

Scuba-Diving Pizza delivery man. I read the other day that there’s an underwater hotel in Florida where a delivery diver will come swim and give you a pizza. What a beautiful world it is eh?

Recently I’ve been mulling over a piece of advice that a good friend gave me, which was simply ‘shoot and reload’. The point of this is that it’s important to realise and accept that the pursuit of perfection is just maddening and real creative growth and solace can be found in the comfort of releasing something, learning from failures and moving on to the next thing.

It may not be the best music you’ll ever make, but if it’s the best you can do for now then you should certainly keep your chin up. I think that there’s real beauty to be found in that, and I hope to keep it in mind for the future.

Mark Loughrey's new EP 'On Through The Veil Anew' is available to stream and download now. Have a listen to it in full via the player below.

Mark Loughrey · On Through the Veil Anew

25 min 57 sec ago Despite announcing their plans for a new studio album earlier this year, Nick Cave and Warren Ell

2 hours 59 min ago Following on from a flurry of bright and uplifting singles throughout last year, Irish singer and