Getting To Know... MIHI NIHIL

Getting To Know... MIHI NIHIL

The band's new single 'I Eat You' is out now 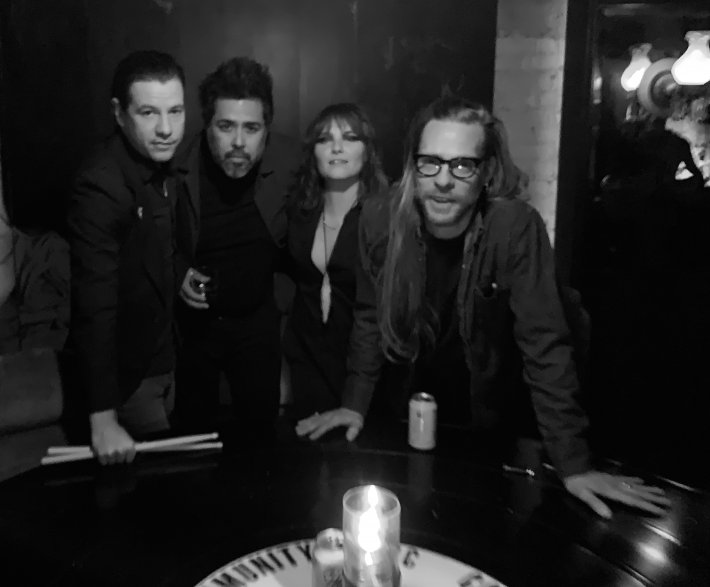 With their highly-anticipated new EP set to land in the coming months, fast emerging outfit MIHI NIHIL are now looking to get our appetites thoroughly moistened as they share their new single 'I Eat You'.

Channeling the raw and uncompromising sounds of the 1970s punk scene, 'I Eat You' is a rough and ready explosion of guitars and drums that makes for a hugely enjoyable romp. Filled with energetic hooks, thunderous rhythms, and some brilliantly engaging vocals throughout, expect this to be the first of many incredible offerings from the group to come.

Adam: Drums. Music was rarely played in our house, but my older brother got into the drums. The first instrument I learned to play was the trumpet but after realising I had a talent for the drums, it became the instrument I identified with.

Ben: Guitar – It was always guitar. My dad played Elvis and Johnny Cash a lot, and they inspired me to play the guitar.

Nick: I had a group of friends who all played different instruments. No one in the group played bass, so that was the instrument I bought and learned to play first.

Mihi: I have always loved the guitar. I never really played but I am drawn to that instrument. My parents were in a folk band and I grew up with obscure folk and bluegrass music, which is all really guitar led. I would say outside of the guitar, it’s the cello. The cello feels like a voice to me.

All our songs are spontaneously composed in the same room together. The inspiration behind our music is being open to the energy in the room, trusting and letting the song find you. It’s that organic collaborative journey, inhibition, and jumping in with two feet. Often we start with a guitar riff, then drums finding a pattern, then bass entering, and followed by vocals, as we weave a particular song; it’s a very freeing way to experience music writing. The essence of each composition, from instrumentation to lyrics, often occurs as a single event during a jam. If we look back at the lyrical themes in our songs they seem to circle around discovery, mystery, death, loss, hope, the after-life, forgiveness, mental illness, drug addiction, consumer culture, and environmental dangers with the understanding that there is a silver lining. There is a through-line in our sound/music, and if we had to pick one prominent inspiration it would be that of Nostalgia.

Nick: Growing up in Manhattan, NY, at that time Hip-Hop was beginning with groups like Public Enemy and Eric B. and Rakim. That was a huge influence on me as a teenager along with Rage Against the Machine, The Rolling Stones and The Beatles. My family, especially my uncle, introduced me to a lot of punk, rock and reggae. My first concert was seeing Bob Marley at Madison Square Garden.

Ben: My parents were listening to a lot of Country Western, so in rebelling against them, I too veered towards Hip-Hop, Curtis Blow, and N.W.A.. I was also really into Metal, like early Iron Maiden. I grew up seeing a lot of live music and going to the local indie venues and that is how I would discover new music. I found The Cure and The Smiths that way.

Adam: Nirvana and The Red Hot Chili Peppers and I loved the Doors and Jane’s Addiction. At that time I was also listening to some Jazz bands and music that I played in the pit orchestra, so artists like Dave Wexel and Chick Correa were also in my teenage scope.

Mihi: I was brought up solely on Musicals and old Bluegrass/Folk music. My early teens would have been bands you’ve never heard of like the Lamb II, F.A.B company, Liberty, and bands you might have heard of like the Nitty Gritty Dirt band, Starland Vocal Band, Sandy Denny, and Ralph Stanley along with more famous artists like John Denver, Bob Dylan, and Alison Krauss. Late teens, I remember listening to a lot of actual whale songs that I had ordered from some research institute. Opera singer Reneé Fleming was my fav, and I liked Cecilia Bartoli as well along with composers, especially Puccini. I was also obsessed with Gorecki’s “Symphony of Sorrowful Songs”, Rachmoninoff’s “Vocalise”, and anything Ennio Morricone. In my late teens, I was introduced to some great bands like the Cocteau Twins, Ride, Verve and Super Furry Animals.

For us as a group, just being together as friends, jamming in the same room together, sharing some whiskey and telling jokes. Riding in cars or taking long road trips is also very inspirational …and radio…cool radio shows. Nature is a big inspiration and so are films/filmmakers. Of course listening to live music…

Adam: At home I tend to play the oldies and classic rock. Also around my house kids are playing GroupLove and Iron Tom.

Mihi: I just recently purchased The Cure’s Disintegration and Cat Steven’s Tea for the Tillerman on vinyl – so I have been into listening to those classic records start to finish. If I’m streaming it’s mostly been this mix I made with bands like the Cramps, Charlie Feathers, the Zombies, David Essex, The Troggs, Slowdive, Kendrick Lamar, Talking Heads, Iggy, Gary Numan, and Q-Tip.

None. Most of our songs have that element of hope or slight sliver of light shining through. We have written many songs about people we can’t/won’t forget or let go of.

Ben: We actually have so much fun together as a band, especially during our jams/writing sessions. We record every rehearsal and those recordings are filled with laughter and jokes. I’m surprised we actually got any songs written. For me, it would be those moments while we were writing our record.

Adam: Just dumb tour antics. Street Drum Corps was on tour with the Deftones. I got dared to go on the bus with just a pair of fluorescent green and black striped tights on – no shirt or shoes. I did…got in there and then I didn’t know what to say, so I just said “hey guys.”

Nick: I was in Chicago with my previous band S.T.U.N.. It was midnight and I was running down the middle of the street with Burt from the Used on my back – like a piggy back ride. I was running full speed and my center of gravity got ahead of me and I face planted and beat my face on the pavement…

Mihi: I once showed up for an audition, having been told to prepare three classical songs in three different languages. After positioning myself centre stage with my music folder opened and ready, I was informed by the judges that the audition was supposed to be memorized, not read. I knew the melodies of all my song choices, but had no clue what any of the lyrics were. At this point in my career I did not know any German, Latin or Italian and had learned all the songs phonetically. I was not prepared for that minor detail. So I just said “ok” and set my music down on the floor, cued the accompanist and just started making up nonsensical lyrics that sounded a bit like German vowels and consonants to the melody of “Die Forelle.” After about a minute into the song I could see through the dark theatre the faint shapes of the judges shoulders shaking with laughter. The accompanist was scowling at me from over the piano, disgusted that I was just butchering Schubert. After I finished, no one said a word. So, I went on to the next song…and on to the next…they sat through 20 minutes of gibberish and sung melodies. Somehow I got the gig though.

The Pixies, Interpol, Spiritualized, Radiohead. We would open for anyone right now, just to play, but if we had to choose, playing Madison Square Garden or Wembley Stadium – to a sold out show would be nice.

Adam: Eyewear designer (which is what Ben does).

Ben: IT nerd (which is what Adam does).

Adam: I dunno…probably a drummer.

Mihi: A tai chi/qigong sifu, a naturopathic doctor or alternatively a professional taste tester for all things food and drink.

Ben: Learn the guitar parts you wrote and slow down.

Nick: A record executive from Arista told me “fake it till you make it…there are no wrong notes, but there is off time.”

Mihi: The best advice I received was early on…when I was about 16. John Denver told us to look at a song like a painting on a canvas and to view the blank space as important as the paint…the space is what defines the shape and form…so Don’t fill the space up. He would say “when you think you want to play, don’t….then the next time you think you want to play, don’t ….then the third time you can play but remember to ”BE the bird” “BE the wind” …don’t just play notes to fill up the space. His manager KO told me never to call any musicians or music people earlier than noon…that was good advice. He also said it very important to remember after a show to personally thank everyone working with you…in the crew, management, venue personnel and so forth to thank each and every one personally before you leave. Other advice I received from John’s band was mostly about knowing how to choose the best alcohol to drink…High quality wine and whiskey.

MIHI NIHIL's new single 'I Eat You' is available to stream and download now. Check out the new video for it in the player below.

2 hours 30 min ago Having brought the soul sound to a new audience over the last decade individually, Anderson .Paak