Getting To Know... Mindset

Getting To Know... Mindset

The artist's new single 'Purple Açaí' is out now 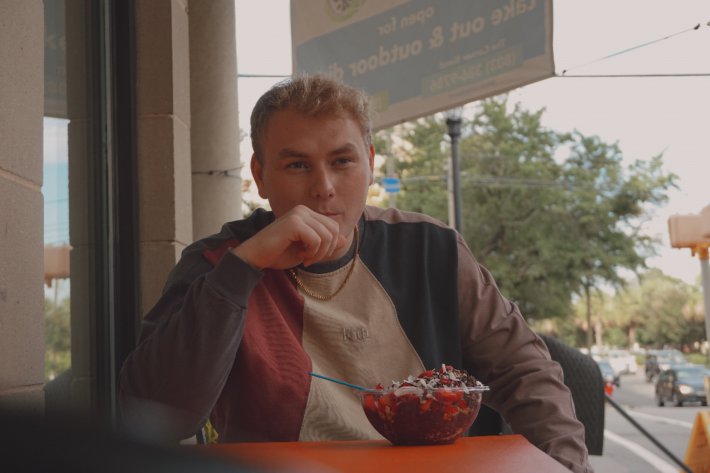 After spending the last few months releasing a flurry of fresh and enticing releases, North Carolina-based rapper and singer Mindset is back to share his latest jam 'Purple Açaí'.

Channeling a smooth and laid-back aesthetic, 'Purple Açaí' sees the artist return in seminal form. Filled with a rich and calming atmosphere, groove-filled melodies, and a progressive flow throughout, this new release is sure to bring a smile to even the most forlorn individual.

I actually don't play any instruments myself but the electric guitar was the first instrument to really intrigue me. At around age 8 I got Green Day’s album “American Idiot” on CD and that's the first band/album I really fell in love with. I took guitar lessons when I was 10 but I never stuck with it, I really regret that now.

Most of my current catalog of songs have a general theme and that is; relationships. Making a song, especially the song writing itself, is a much needed outlet for me and my emotions (I am a cancer btw). Getting my thoughts and feelings out onto the page is such a relieving process for me and then actually recording and creating the record brings me unmeasurable excitement and joy; there is nothing better than hearing/feeling a song evolve from my mind, to the page, into the mic, and then finally out of the speakers and into the world.

At around age 13 I got really into pop/punk music from bands like Pierce the Veil, Sleeping with Sirens, A Day to Remember, and Coheed and Cambria. Around age 15 I fell in love with 90’s Hip Hop and artists like Nas, Big L, Outkast, A Tribe Called Quest, and Lauryn Hill. The old school lyricism and conscientious writing is what really opened my eyes to the power of music and the spoken word.

The driving force of my existence is to help others. I think music is a great way to do that because music has helped me through some dark times and made great times even better. A song can take you into a new world, completely detached from the one you are in even if it only lasts for a few minutes. I want people to not only listen to my music but more importantly, to FEEL it.

I have really been digging “Dominic Fike” over the past few months and his album “What Could Possibly Go Wrong?” really exceeded my expectations, he is definitely one of the most talented artists in the industry right now. I’ve also been following “Wiley from Atlanta” and “Teezo Touchdown” as well, they are on the come up for sure.

Of the 5 singles that I have released, they are all about two women in my life. My songs “Empty Vial” and “Hotel in Hell” are about the same person while “Breakfast in Bed”, “i still use ur netflix”, and “Purple Acai” are all about a different girl (both are my ex’s). In all of the songs that I write, there is always a reference to someone in my life. Even if the whole song isn't about them, I always dedicate a few bars to people I know/knew.

My song titled “i still use ur netflix” has a very literal meaning. I did indeed still use her netflix account after our relationship ended, I saw it as one of the perks of the break up. She didn't know that I was still logged into her account, that was until the day before the song released. A publication based out of Toronto called “Aesthetic Magazine” Premiered my song on their website a day before the official release. I promoted the premiere of my song on my social platforms and later that night I sat down to watch my favorite anime called “Death Note” on netflix. I went to log in and the password didn't work… she must have seen me prompting the track and realized that it was her netflix I was still using and she changed the password that day.

Wow, this is a tough one but I would probably have to say J Cole. He is one of my favorite artists of all time and the energy at his shows is unlike anything I’ve ever seen/felt. To this day, the best live performance I have ever seen was Cole on his 2014 Forest Hills Drive tour, I caught the show in Charlotte.

Before I really set my sights on a career in music, I was planning on getting into politics (I was young and dumb). My main goal is to help others and I thought the most effective way to help a large number of people at once was through political representation. Over time I realised how backwards our democracy really is and came to the conclusion that anybody who makes it to a notable position in the political realm is in turn a puppet. My goal is still the same, I am just accomplishing it through music instead of politics. I'm still interested in politics and will use my voice and speak out on issues but I do not plan on becoming a politician (thank God).

I've picked up a lot of good advice throughout my experiences as a musician but the most important advice I have received is to focus on the people who like your music, not the people who don’t like it. I know this sounds pretty obvious but it is really easy to focus more on the negative than the positive sometimes. All you need is 1000 loyal fans to have a career in music. If you have 1000 fans that love your music and are willing to buy your merch, come to your shows, and engage with your content, then you can sustain a career in music. If 1000 fans each spend around $100 a year buying your merch, coming to shows, buying your music, ect.. Then you will have $100,000 and a solid fan base.

Mindset's new single 'Purple Açaí' is available to stream and download now. Have a listen to it in the player below.

1 hour 8 min ago After the sudden cancelation of the 2020 festival due to the pandemic, Slam Dunk has now announce