The frontman's new single 'Push & Relax' is out now 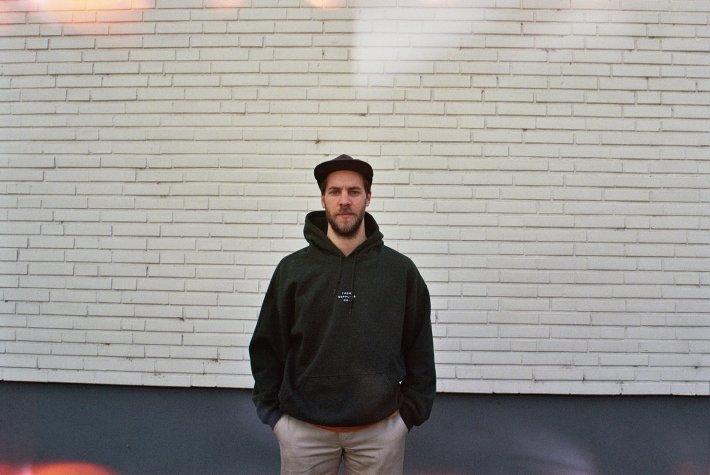 With his highly-anticipated debut EP 'Grey City' set to land on the 2nd October, emerging singer-songwriter Slowlife is now looking to wet our appetite with his wonderfully dreamy debut single 'Push & Relax'.

Taking his cues from other lo-fi individuals such as Rex Orange County and Mac DeMarco, 'Push & Relax' makes for a incredibly breezy introduction to the artist. Filled with sweeping production, wistful guitars, and his own solemn vocal style, this new offering is a smooth and calming start that we can't wait to hear more of.

So with his new EP nearly upon us, we sat down with him to find out more about his background and what has inspired him most over the years.

I guess it was the guitar. I remember my father playing guitar for me when I was a kid and I thought it was so cool that you could basically play any song on a guitar. “This land is your land” was the first song I could play and I was the happiest kid when I played it for my mum for the 1000th time. Right now I also like all kinds of keyboards and synth textures which are also very prominent in my music. My father plays keyboard as well so it comes as no surprise, I’m also drawn to them, I guess.

I really wanted to capture this late summer/golden hour feel. I like music that lets your mind wander without even noticing it and I wanted it to be positive, optimistic and serve as a celebration of life. I thrive from those little moments that make you forget everything else for a minute. Music-wise I drew a lot of inspiration from artists like Advance Base, Liam the Younger, Mac DeMarco, Jessica Pratt & Kurt Vile. I made a playlist on Spotify called “slowlife’s picks” where you can find a variety of artists that helped me craft my songs.

When I was 12, I started listening to Iron Maiden. The three-part riffs and solos blew me away and because of them I think I’m quite good at finding melodies if needed. I also grew up with the music my dad played in the house such as Queen, Supertramp, Genesis, Journey & Lake. But after all, I’m still a little indie boy at heart so the classic bands such as Bloc Party, Interpol, Foals and anything indie related have a special place in my heart because this music shaped me the most growing up.

We watched a lot of live concert DVDs at home and I remember specifically I had this broken Playmobil crane boom I used as a mic boom just like Freddy Mercury did and pretended to play a concert in my bedroom. I also broke a lot of wooden spoons while drumming on my mum’s pots. So, it wasn’t a song specifically, more the idea of performing music, I guess. I still have the very first guitar my father gave me with a lot of scratches from performing my bedroom concerts.

Cobra Man just released an awesome new song but their whole back catalogue is full of bangers. The new Flaming Lips album is really cool and I’m really excited for the new Kevin Morby record. “Midnight Sky” by Miley Cyrus is a cool song, but you have to check out the Jimmy Fallon live version, which is so much better than the recorded version. Mildlife has a new album out which I’ll be checking out next and a new Fleet Foxes album will be out by the time you read this!

On every song on my new EP there are parts that are more or less about the people in my life. My family, my girlfriend and one song about a past relationship. Besides that, the songs are like memories from those little moments where everything was just perfect as it is and you were just there to enjoy them and be happy.

Basically, everything is quite unusual since I released the first song! I’m amazed that so many people are listening to my music. The response has been nothing but positive. Of course, I put in the work to make my music be heard, but the fact that people genuinely like my songs is overwhelming and really means the world to me. I went through a lot before I finally took the step to start my solo career so I’m thankful for everything that happened since then.

Skateboarding and travelling. I started skateboarding because of my older brother when I was 9. There are so many life lessons you gain from it. You fall, you get back up and try again over and over again until you land the trick. You can also get so creative because there are so many ways to do it. It’s a lot of fun, a great exercise and it keeps my head sane. It sucks that you can’t travel right now. I like to get out of everyday life and see new places and experience new things. Ideally would be a combination of travelling, playing music and skateboarding. I hope for it to happen next year.

That’s a tough question. But I assume, even if I was not able to play any instrument, I would still be a music enthusiast and I would keep working jobs in the event industry, like I did the last 7 years. Unfortunately, everything is on hold now and it sucks, because peoples’ lives depend on it and venues, companies, etc. might or are already closed for good… So, support those in need and let’s just hope for everything to be over sooner than later.

Make the music that YOU like and make it for yourself first and don’t compare yourself to other artists. Everyone has their own way of doing things so do it YOUR way whatever it might be. You don’t have to have the best equipment for writing and recording your songs and luckily nowadays you can do pretty much everything yourself. There are tons of tutorials, “how-tos”, etc. on YouTube you can take advantage from. I can happily say that I’m doing exactly this and it feels great that I can stand behind all that I do 100%.

Slowlife's new single 'Push & Relax' is available to stream and download now. Have a listen to it in the player below.

3 hours 6 min ago Following up the release of his highly-praised debut EP 'Blood Harmony' last year, FINNEAS is bac

6 hours 25 min ago Following on from previous releases ‘Cherry