The band's debut single 'Orange' is out now 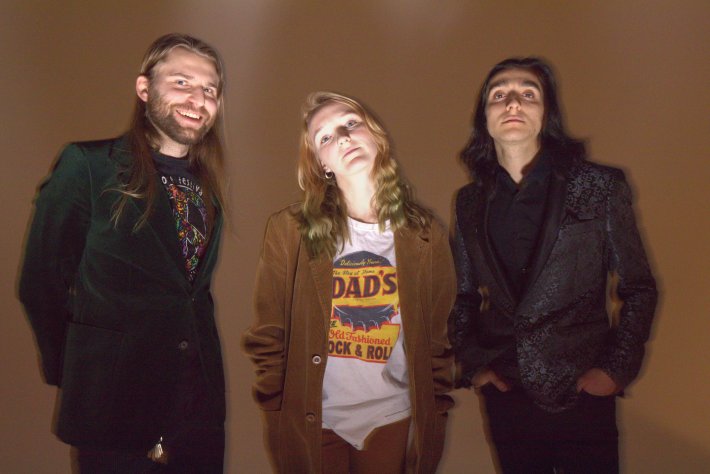 Having already made a lot of noise around their hometown of Toronto, Canada these last few years, emerging grunge-rockers Sunlust are now ready to introduce themselves to the world with their stunning debut single 'Orange'.

Channelling the retro grunge sound of acts like Nirvana and Hole, 'Orange' makes for a powerful introduction to the trio. Filled with killer riffs, pounding production, and a truly catchy chorus, expect this to be the first of many anthems coming from them in the months to come.

Stephanie Woulfe - I would have to say bass. The Chili Peppers were my first love, and my brother is a stellar bass player, so I was always around that grooviness.

Dan Wiktor - Drums! Luckily there was a drum kit at home since I was young.

SW - Chili Peppers, White Stripes, Jack Johnson and Barenaked Ladies were my favourite bands when I was probably 14. Later years were Nirvana, Hole, Dinosaur Jr, Blind Melon, the Pixies, and the Breeders.

SS - It depends on the year - for instance, Grade 10 was mainly a lot of metal; such as Metallica and Lamb of God. Grade 11, on the other hand, was a lot 60s music; The Doors, Jimi Hendrix, Jefferson Airplane, and Cream were among many favourites. The Beatles were always a staple no matter what else I was listening to.

SW - I was watching “Nirvana Live at Reading” and when they played “About a Girl” I thought it looked easy to play, so I picked up a guitar and learned it. So that would be one song that got me where I am now.

DW - Twist and Shout was one of them - I love making people dance!

SS - in Grade 8 (c. 2008) I watched these other kids at my school play “In Bloom” by Nirvana for the talent show. It was the first time I’d ever really saw anyone play as a band on stage. I thought, “I could do that too.”

SS - Depends on my mood. If it’s a calm Sunday morning you might catch me listening to Simon & Garfunkel or James Taylor. Other mornings when I need a lot of energy you might hear me blast “South of Heaven” by Slayer on my way to work.

DW - Soul and funk music is a classic vibe for me in the morning.

SW - Really depends on what I’m doing! Making breakfast on a Sunday calls for Gordon Lightfoot or Tragically Hip; driving to work I like something a little heavier to rev me up.

SW - A lot of my songs aren’t fully and completely about singular people or events, but specific lyrics or one-liners within the songs can be. Most of the songs I’ve written do conjure up feelings from a certain time period or person, though.

DW - Our debut show at The Piston in 2018 was special - so many of our friends and family were there to support. It was the first time anyone really heard us play and we could feel the warm anticipation from our closest mates. Definitely quite the party on a Tuesday night!

SW - I grew up just outside of Windsor, Ontario, so when we played there for the first time, all my friends and family were seeing us live for the first time. I must have been nervous because I broke 3 or 4 strings and had to use guitars from the other 2 bands playing that night. Good show though!

SS - July 4, 2019, when we got to play in that show with Ready the Prince and Zig Mentality. It was at The Piston, which is a local venue that has been very good to us so far. The room was full of young and energetic people. It was the only show we played with stage-diving and a moshing presence that extreme. Totally awesome!

SS - practice, practice, PRACTICE! Also don’t give up who you are - your personality and leveraging it to make valuable connections is half the battle.

DW - It's a long road to the top if you want to rock n roll! Patience, positivity, and continuous work ethic is vital - celebrate the small successes and build on them.

SW - Be yourself and all of your wildest dreams will come true.

Sunlust's new single 'Orange' is available to stream and download now. Watch the new video for it in the player below.

4 hours 19 min ago Since the tragic passing of Gang Of Four founding member Andy Gill in February last year, countle