Getting To Know... Swimmers

Getting To Know... Swimmers

Their new single 'SWM' is out now 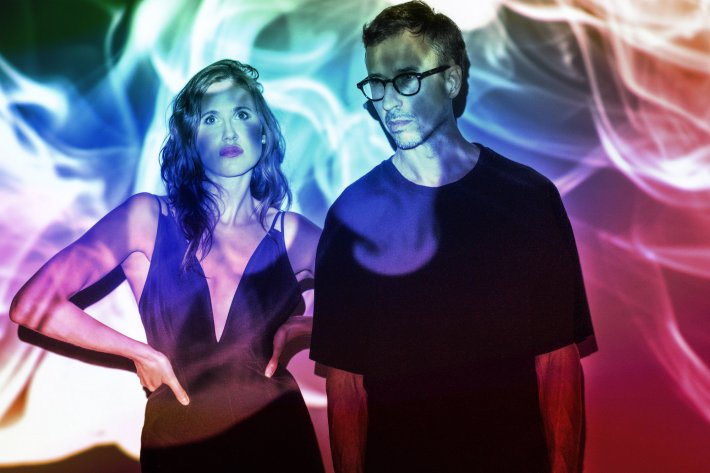 Following on from the enormous response they received for their glittering debut single 'A Minute Of Sunshine' in October, London-based duo Swimmers now return to deliver their latest release 'SWM'.

Lifted from their forthcoming debut EP, 'SWM' sees them in a more mature and darker sounding light. Filled with a rich and ethereal atmosphere, sweeping electronics, and warming vocals throughout, this new delight looks set to see them grow even bigger throughout the new year.

So with the new single available now, we sat down with them to find out more about their background and discover what has inspired them over the years.

Luis: Synth, so many sounds you could do with it! At the time I thought the guitar looked really hard… ended up becoming mainly a guitarist!!

Luis: I was really into loads of varied stuff, but went from listening to mostly pop on my early teens to suddenly being really into Grunge, like The Pixies and Nirvana.

Rose: I grew up in a pretty religious background so wasn’t exposed to a lot of commercial music until I was about 15.. so I listened to Michael Jackson’s greatest hits for the first time and that album basically blew my mind. Couldn’t get enough of pop music at that stage.. was really into Justin Timberlake, and great vocalists like Whitney Houston, Christina Aguilera and Mariah Carey.

Luis: Can I list 1000?! I do tend to move on from songs really quick though so at the moment Funeral Singers, has the most deeply inspired words and the way they fall into the song is just masterful.

Rose: Oh God, there are so many. Zombie by The Cranberries comes to mind. I grew up in the same town as Dolores O’Riordan and the message of this song just hits me hard.

Luis: The best ideas usually come to me unexpectedly, at that moment I just need to switch off immediately from everything else and try to capture it in full…it usually happens very quick so it’s like a thrill mixed with panic so it doesn’t escape me. Then I just need to isolate myself to develop it.

Rose: Just try to find some headspace, peace and quiet. (I have a 3 year old).

Luis: Definitely need to refresh my favourites playlist, but listening to a lot of Sylvan Esso at the moment.

Rose: Any song I’ve ever written has been about someone close to me. Usually my boyfriend at the time.

Luis: Mmm, one that comes to mind….The lead singer from a band I was playing guitar for fell off from quite a high stage on the opening song, somehow manage to climb back up with the help of security and stood still in the middle of the stage trying to carry on. The whole band couldn’t stop laughing! He was suppose to play acoustic on the next song, so I decided to help him out and bring it over to him, he looked at me fiercely…but somehow managed to strum a few chords…managed to finish the show to find out he had a broken arm!!

Rose: I was so nervous going on stage for a solo on a big gig when I was pretty young, I went temporarily blind in one eye. Came off stage afterwards, apparently the solo went very well but I could remember a thing.

Luis: Christine & The Queens. Not just for the amazing artist she is, but would be great to perform to her crowd and hope they’d appreciate our music.

Luis: I was once a Biologist actually, but soon realise I just loved nature for it’s aesthetics, so definitely an artist of some sort, painter probably.

Rose: Mmm probably an actress.. or a psychologist.

Luis: Stay true to our art as you cannot please everybody, but thinking well I might have just been giving that advice to myself and solidifying it through the years!

Swimmers' new single 'SWM' is available to stream and download now. Have a listen to it in the player below.

3 hours 7 min ago With their highly-anticipated new EP arriving early next month, People Club have now unveiled the