Getting To Know... Volleyball

Getting To Know... Volleyball

The band's debut single 'Slide' is out now 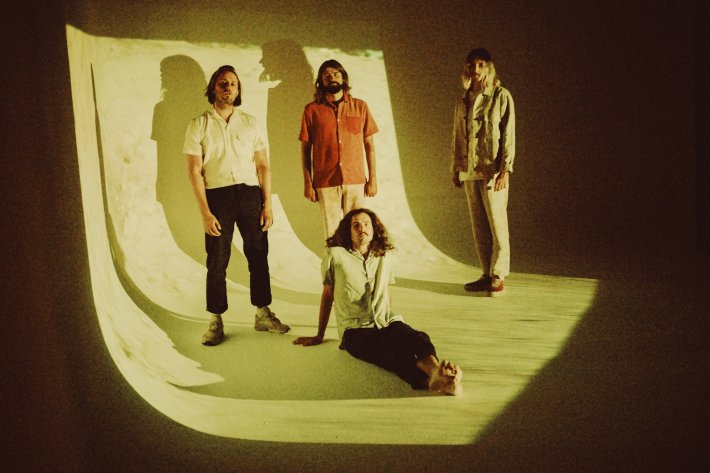 After spending the majority of this year cultivating and developing their sound, London-based outfit Volleyball have now delivered their stunning debut single 'Slide'.

Marked as the first of six releases to come, 'Slide' sees them kick things off in stellar style. Channeling a rich and dense psychedelic atmosphere that also marries soaring guitar hooks and breezy vocals, their brilliant new effort cements them as an exciting and captivating group throughout.

Rudi: Nirvana led me down the rabbit hole, I saw ‘Nevermind’ being talked about on TV and knew my parents had it on CD...so after tracking that down, it became a regular sonic guest in the house. My friend at school could play a few riffs - I think ‘Come as you are’ was the first he taught me. Love blossomed soon thereafter.

Hugh: I first started playing the cornet; that carried on for 3 or so years but fell by the wayside when I got into my teenage years. My dad is a great guitarist and always had (and still has) lots of guitars about the house so it was inevitable that I would eventually pick one up and start teaching myself albeit upside down at first as I’m left handed.

Tom: I started playing the piano at 4 teaching myself how to play Fireman Sam by rewinding the VHS and then running to the piano to copy it.

Rudi: There was a strong magnetism as a band for wanting to write songs all together. We've all written with various projects before, but as this line-up, we seem to have a real spark.

Thom: Yeah we have a great studio dynamic, it feels like we're all cells in a bigger organism and we all take turns at the helm without stepping on each other's toes. So it's probably that and Bob Mortimer.

Thom: I was into the rock classics via my Dad, and resigned myself to being a rocker till my mate sent me a Squarepusher tune, and after a four hour wait to download it on dial-up over MSN at four in the morning on a school night, it completely blew my mind. After that all sorts, I was playing in jazz, improv, psych and folk bands and listening to early Caribou, Four Tet and Minotaur Shock.

Rudi: I went as far as Rage against the Machine and System of a Down. This slowly developed towards indie of the day - Arctic Monkeys, White Stripes type of thing. Backwards, I found Jimi Hendrix and Led Zeppelin...which took me towards Jefferson Airplane and The Doors. Thom was also really into Sophie Ellis-Bextor's second album 'Shoot from the Hip'.

Hugh: All I did as a teenager was skate, as a result I got all my music from skate videos, ‘Yeah Right’ having the best in my opinion. I remember hooking up my mini-disc player to the TV and recording the songs on it, skate sounds and all!

Tom: For me it was loads of 60’s stuff, Motown, Beatles, pysch etc.

Rudi: We write from studios and home setups quite a lot to form initial ideas. Bringing in inspiration from phone recordings from general life and travels has been a really valuable approach for us. Balancing the high-quality audio world with the more imperfect can give great results. Musicians often have access to so many plugins and software instruments, sometimes the process involves processing them to get a level of distortion or degradation back in. I recently watched an interview with Stu from King Gizzard and the Lizard Wizard talking about one of their latest releases, ‘Straws in the Wind’ - the main acoustic guitar was recorded via iPhone - sometimes capturing a moment is the most important thing - rather than having the best equipment. Although as I’m writing this, Black Friday looms and the endless equipment hole needs filling - and that is fun to do.

Hugh: At the moment being anywhere new! Or finding a new texture or playing a different instrument.

Tom: When I know I have nothing else to do and I have a clear space/mind. Or sometimes it can just come to me whilst doing something mundane like washing the dishes.

Rudi: I’ve been getting into Kikagaku Moyo, a Japanese psych band, who have really great jams and have an electric sitarist. Also, another dude called Sunny Colón who I’m just getting into - dreamy textures and melodies which fit perfectly but at the same time- kind of catch you off guard.

Hugh: In these lockdown times I’ve been listening to a lot of Tune-Yards, Kevin Morby, Anderson .Paak & Fontaines D.C.

As a band, we regularly update a Spotify playlist called ‘Mindflowers’. Have a listen here if you reallllyyyy want to know.

Rudi: The Last PRS royalty check in the post.

Rudi: Morgan Delt would be a cool show. Khruangbin on a slightly bigger scale. Love how they can get an arena full of people to sing along with guitar riffs.

Thom: Opening for Connan Mockasin or Infinite Bisous or someone from that crew would be really cool.

Thom: I love creative writing and story telling, and when I was young I kind of reached a point where I was trying to write books at the same time as drumming and music. I think I made a subconscious choice to let music win that fight.

Rudi: Tom in the band does a lot of graphic design work, that seems to be the most viable non-music answer amongst all of us. He did our artwork, as well as for some bands we are good friends with - Cheriton and HiFrisco. Hugh had plans to become a balloon artist at one point. We have been diversifying our skill set over the past few years in order to stay sustainable as a band, so anything from photography to making and editing films would be other obvious choices.

Volleyball's debut single 'Slide' is available to stream and download now. Have a listen to it in the player below.

2 hours 15 min ago Having brought the soul sound to a new audience over the last decade individually, Anderson .Paak