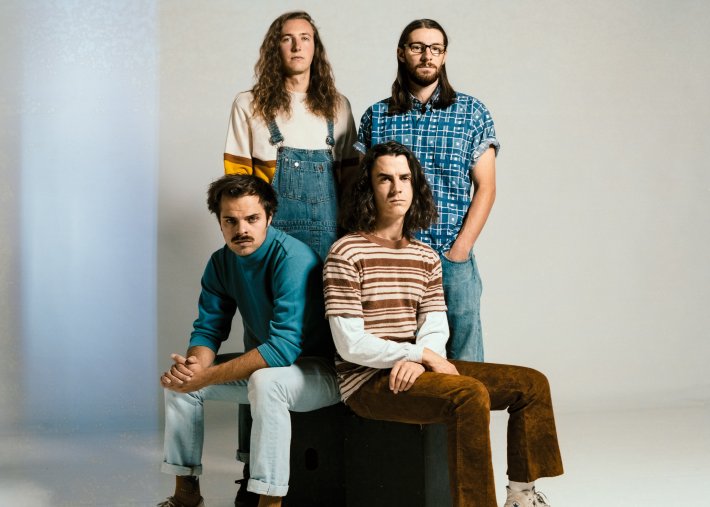 With their 2016 self-titled debut album going onto generate viral numbers of streams around the world, with multiple tracks picking up millions each, Vancouver-based quartet Peach Pit are looking to do it all again when their sophomore full-length 'You And Your Friends' drops this Friday 3rd April.

Featuring the critically-praised new singles 'Black Licorice', 'Feelin’ Low (F*ckboy Blues)' and 'Shampoo Bottles', their latest effort sees them return to the bold and uplifting indie-rock vibe that they have been pushing since their earliest beginnings.

So with their return evermore imminent, we sat down with lead singer Neil Smith to find out more about their latest release and what we can expect from them as we move through the year.

Not bad, getting used to this quarantine thing. I just binge watched Tiger King yesterday, that was pretty sick.

You are just about to release your second album ‘You And Your Friends’. Can you tell us more about how that record came about?

Well pretty much we put out 'Being So Normal' back in 2017 and then went on tour for like two years and in that time, we go really lucky and landed a record deal. But the whole time we were on tour we didn’t really write to any songs and then our record label was like “hey, we need another album” and we were like “Oh shit, right”. So, we wrote “You and Your Friends”J It was tough! But we’re happy with how the record turned out.

You say that this release has been written from true stories and people in your lives. Do those that you have written about know that they have been immortalised in song?

Some of them definitely do. There’s a few people out there though that I haven’t told though. I probably won’t say anything either cause its kind of an awkward conversation to have.

And how would you say this album differs from your first?

Well working with John Congelton on the record influenced us a lot. He really helped us try out new things that we hadn’t before. For example, I used a distortion pedal for the first time!

You are also about to start a UK tour, which has practically sold out already. Do you have a good relationship with your UK fans?

We love our UK fans. Playing shows over there is the best. The kids seem to go way crazier and party a lot harder.

And are you excited about getting your new material in front of a new crowd?

I can’t wait. Playing the same songs over and over for a few years now can get pretty boring. We have a few songs that we can’t even bring ourselves to rehearse until like two days before a tour because we hate them so much.

It’s a busy year for you, what with the album and tour coming up, but aside from those, do you have anything else in store for 2020?

If this quarantine thing doesn’t end anytime soon then probably a lot of video games and Netflix this year. I’m also going to try and write as many songs as possible while I’m locked in my apartment.

And finally, do you have any traditions or superstitions that you like to do anytime you are on the road?

The only traditions are that Peter and Mikey share a room, and Chris and I share a room. I don’t really know how that started but we never switch it up. Another one is before shows we like to give each other a little peck on the cheek when we’re waiting side stage.

Peach Pit's second studio record 'You And Your Friends' will be available to stream and download from Friday 3rd April via Columbia Records. Check out the video for their latest single 'Black Licorice' in the player below.

5 hours 17 min ago With her eagerly-awaited covers album set to drop next month, Marika Hackman has now unveiled a p

Getting To Know... The English Rain