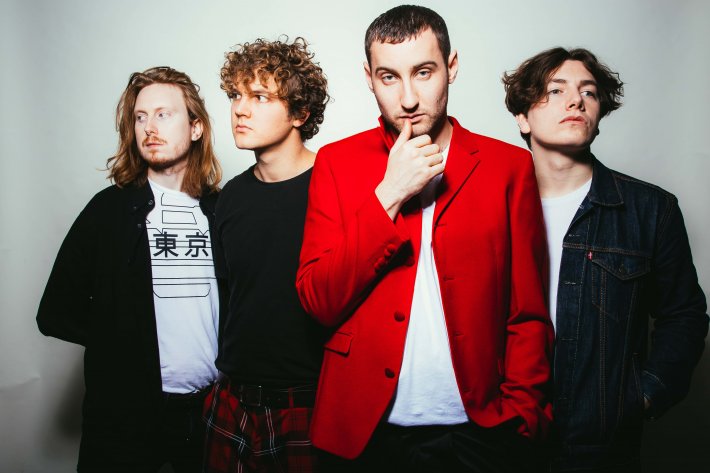 It has been fair to say that no one is having a year quite like Sea Girls. After being named as one of the BBC's Sound Of 2019 artists back in January, the indie-rock troupe have found themselves riding a wave of acclaim over the last few months, which has culminated in an intense festival touring schedule. So as they prepare to power on through this year, we caught up with frontman Henry Camamile to discuss their touring plans, their latest single 'Closer', and when we are getting their debut album.

We’re all good thank you.

You guys are on a hell of a roll right now, and seem to be writing a new song nearly every month. Can you tell us how you go about writing and recording your tracks?

We all write in the band. Sometimes it is a finished song or sometimes we will work on the beginning of an idea to form it into a song. When I’m writing I’ll start singing melodies and words or phrases that come into my head until something leaps out and means something to me. Then I’ll focus a song around that, take it and jam it in the band and finish it off that way.

We just start recording our favourite songs in the studio and focus on what the song needs rather than thinking about the last song we did and how that sounded.

You have just released your new track ‘Closer’ which we already heard you perform at Community Festival recently. Can you tell us more about how that song came about?

The song came together in a backwards fashion in a hotel after our first gig in Spain. It was originally written as an electronic track about being far away. Replacing the synths with guitars back in London gave the track an absolute new lease of life.

You are playing an epic list of festivals later this year including Reading & Leeds, TRNSMT, Truck Festival, Benicassim and many more. Are there any that you are particularly looking forward to?

Reading and Leeds always! We are playing the Radio 1 stage this year, that massive tent. Last year we played the Festival Republic stage and it’s just a dream to be playing this festival two years in a row. We’ve just played TRNSMT which felt very cool, the Scottish are so up for it. Benicassim in Spain is coming up and I hope to take an inflatable slice of Melon for a swim after the set. Been looking forward to that.

And do you have any traditions that you like to do before you get up on stage?

Just before we go on stage we like to get in a huddle and say anything along the lines of “let’s fucking do this”.

You are also heading out on a UK headline tour in October this year. So, does that mean there is more material coming out around then? A debut album maybe?

We just put out Closer and we are going to put out at least another couple of tracks before the October tour. While we have the music, we want to put out we are gonna keep doing it. Got to keep each tour fresh with new music. Album wise we’re looking at early next year. We are in the middle of that now.

And finally, you have achieved so much already this year, but is there anything on your bucket list that you would like to see come true in the years ahead?

I’d like to finish a tour where I don’t break a guitar. That has been a problem this festival season I’ve smashed 2 already. Oh, and in October across the shows we are gonna play every song we’ve put out. Looking forward to letting some of the more less known tracks have a moment.

Sea Girls' latest single 'Closer' is available to buy and download now, and you can check out in the player below. Find the band's upcoming tour schedule and where to buy tickets here.

5 hours 37 min ago With their highly-anticipated new album set to drop later next month, Peggy Sue have now unveiled