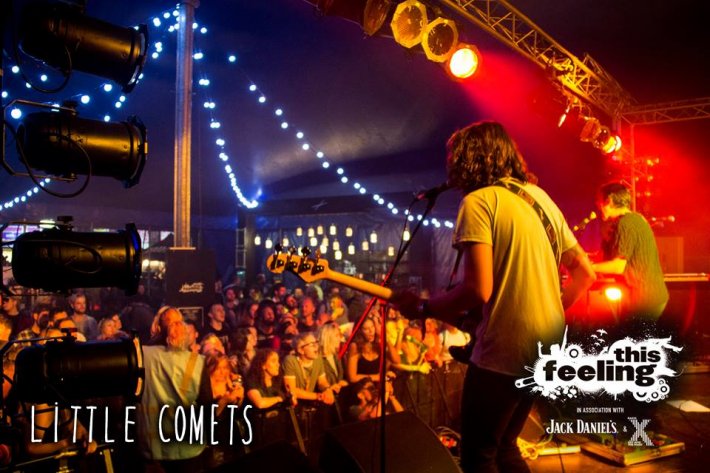 This year was my first time at The Isle Of Wight Festival, and I was pleasantly surprised. Not only was there a huge spectrum of different artists from smaller indie bands like YAK to the absolutely massive Queen- but the whole atmosphere was sensational. Visitors enjoyed beer and a variety of live music in the sun, what more could you want? I decided to take the opportunity to find as many upcoming new artists as I could and I was not let down…

Little Comets began getting recognition after touring with their friends Catfish And The Bottlemen. I wasn’t even aware of them playing until I wandered past ‘The Jack Rocks: This Feeling’ tent and noticed the incredibly infectious ‘Dancing Song’ playing. The crowd loved it- from rowdy teenagers to middle aged drinkers; every single person seemed to be having the time of their lives. Little Comets are one of those unique bands that understand how to fully engage their audience whilst displaying the passion they clearly have for their music.

The Carnabys are a band that creates extremely catchy, relatable songs with huge choruses. Before they even performed, a loyal group of fans gathered, taking photos with the band and sparking some interest in passers by. Vocalist, Jack, is an outstanding frontman; he completely exhibits passion and enthusiasm. Even performing on the tiny stage just after they appeared on 'The Big Top', they proved that no matter where they perform- they are going to completely own it. Days later and I’m still finding myself singing the addictive ‘Peaches & Bleach’ along with ‘Is That My Body’. Be sure to check these guys out, their new album will be out soon and I can confirm that it’s outstanding.

You may have heard of the indie five piece band from Stockport, going by the name of Blossoms, who've had a lot of support from BBC Radio 1. They stunned the Big Top Stage with massive tunes like 'Charlemagne' and 'Blow' excelling with their psychedelic, retro edge. The crowd fell in love with Blossoms. Their melodious synth sounds filled the tent and by the end it can’t be denied that Blossoms rightfully gained a number of new fans.

By Sunday afternoon, most people seemed to be losing energy. That didn’t stop Bedford rockers The Wholls from killing the 'Jack Rocks: This Feeling' Stage. Their electrifying and edgy performance highlighted why they’ve been recently gaining a number of new fans. After some actual guitar smashing, The Wholls stormed off stage, leaving everyone impressed and excited about this growing band. Interestingly, later on I found out that they actually performed at Miss World in China back in 2015- doesn’t exactly seem like their kind of crowd!

Next year, if you get a chance to visit The Isle Of Wight festival, I would recommend it. No matter what type of music you like or what age you are, there is something for you. I saw countless bands that I haven’t stopped playing since, so check out the line-up from this year and have a listen. Remember to support live music this summer by attending gigs in your local venues and perhaps a festival or two!

2 hours 59 min ago After delighting us with a flurry of warm and enticing releases these last few months, James Vick

3 hours 15 min ago After establishing himself with a flurry of releases throughout last year, fast-rising artist Tot