Two covid tests, one rearranged flight and a lot of snow, Viva Sounds Festival is back and it didn’t disappoint 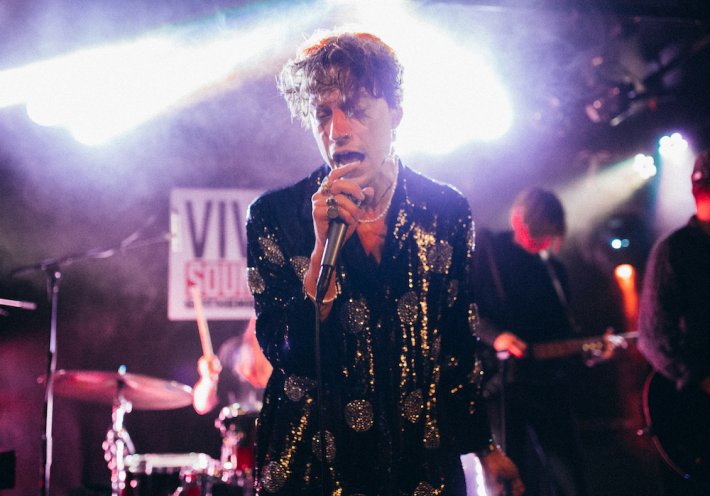 As the dark nights started closing in and the winter months loomed, the inevitable spike in Covid cases left us with serious doubts about whether we’d make to Gothenburg for Viva Sounds in December. But thankfully, even with Boris changing his rules 2 days before, we managed to get the best part of 2 days in Sweden’s (first) second city and it felt, hmmm, it felt like 2019.

Firstly – it was great to see a relatively new vinyl plant in Gothenburg, Spinroad Vinyl not just operating but thriving with the endless demand of vinyl from across Europe and it was worth the short bus ride in the blizzard. After all it is Sweden, snow is like the fish and chips of Northern England, it’s expected and necessary.

I was lucky to catch a short, stripped back set from an artist familiar to me called Tilde, based in the front of the record store, Andra Långgatans Skivhandel. Tilde played with just an electric guitar and sang the most beautiful, heart-rending versions of her new album ‘Pink Moon’ to a small audience, channelling Lana Del Ray and Banks to name a couple.

Record Store No.2 (Fyrens Ölkafé) yielded a slight larger stage and audience, and a bit later into the night, Erki Parnoja performed a special set on what is a small stage for one of Estonia’s favourite guitarists. His use of major/minor thirds and delay in the epic ‘Vesi’ from his debut EP Himmelbjerget is something to make most musos ‘purrrr’ like spoiled cats, and equally impressive to perform the song solo with just the guitar and still punch out a credible wall of sound, an incredibly talented guy with and without a guitar. Following up was Stockholm native, Bonander, who demonstrated witchy, dark, synthpop with Kate Bush esc ghostly harmonies and very much in-line with what our friends at Icons Creating Evil Art love to release. There’s nothing quite like it out there and worth checking this one out.

Sunhill was a band I admittedly didn’t have much expectation going into but was quite blown away by the result, great live band with energy. One of their singles ‘Counting Off’ has been on constant repeat since the festival, served with 90s indie and grunge with a delicious slice of Britpop on the side. I was tipped off about Kristofer Greczula, a potential new pop magnet from Sweden, a country which loves it’s pop music, and I firmly believe Kristofer is one to watch, his outlandish attire and style complimented by a solid set of lungs and crafty songwriting, he played out a thoroughly engaging set before my early flight back to the land of Covid.

Another smooth operation from the Viva Sounds gang, it is becoming increasingly a must-see event on the showcase festival circuit, not just for the size, but for the personality and well-being of the artists involved. It feels very much like the scene in Gothenburg has become a small, budding industry with legs to grow and the festival represents a passionate collective of people that are ultimately music fans first. And that sounds pretty good to me.

Until next time friends…

Jake Pinto - 'Best That We Can Be'

1 hour 19 min ago Following on from the release of their highly-praised 2020 sophomore LP 'So When You Gonna...', D

22 hours 15 min ago Having already found huge support for his run of releases over the last few months, progressive a