The band's new single 'Skeleton' is out now 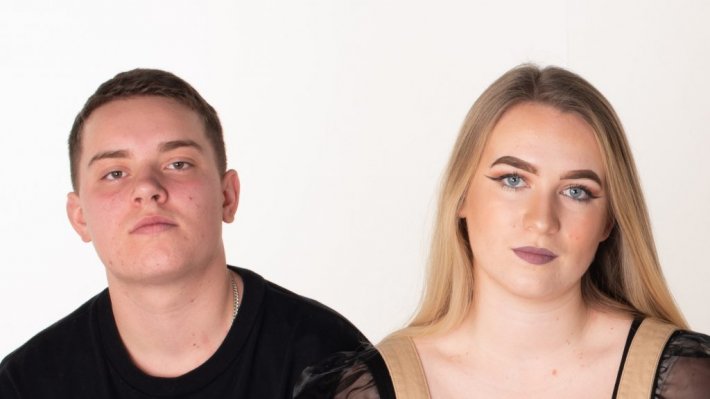 Following on from the release of their highly-praised debut single 'Hush' from earlier this year, electro-pop duo singer/songwriter Rebecca Valerie and percussionist Jack Dunstall aka TYDL have now returned to share their latest effort 'Skeleton'.

Bringing back more of that dark and atmospheric, 'Skeleton' blends moody synths and brooding 808s with a wistful energy to create a truly captivating aesthetic. With Rebecca's vocals cementing the pulsing tone of this new offering, they are sure to become one of the most talked about emerging artists of the moment.

So with their new single delighting us at every turn, we sat down with both of them to find out more about their background and what has inspired them over the years.

Jack: Guitar initially but have always been very interested in the drums.

Rebecca: Keyboard. I always tried to play the guitar but could never get the hang of it but everything felt natural when I started playing keys.

J. Me personally I would say Bastille mainly and I also take inspiration from drummers like Chad Smith from Chilli Peppers.

R. It would have to be Paloma Faith. Her music has always resonated with me and she's definitely influenced me as a songwriter.

J. Funk rock and alternative pop/rock bands like System of a Down, Eminem and Avicii. I have just always loved all types of music.

R. My interest in music has always been a mixed bag but I would have to say that alternative bands like Panic! At the Disco and Twenty-One Pilots always remind me of being a teenager in school.

J. I would say Under the bridge by the Red Hot Chili Peppers because it was my favourite track and I always find myself going back to it.

R. It’s difficult to pin one song but Ruby by the Kaiser chiefs definitely stands out in my mind. It was the first song I sang in public at a karaoke bar when I was 7 and definitely pushed me to become a musician.

R. I usually write about my experiences and my feelings so you could say all of them are definitely related to people in a way.

J. When we played at Concorde two, although it was with college we managed to get quite a big crowd.

R. I agree with Jack. Performing at the Concorde 2 was amazing.

J. Animals, mainly because of my Chinchilla.

R. I love anything to do with the arts. Acting, musicals working backstage I want to be involved in any way I can.

J. Would be working with animals, maybe a zookeeper.

R. I used to perform in plays and musicals A LOT. It was pretty much my whole life from age 11-16 and I went to an acting group which we did plays in the Islands main theatre and also went to the Edinburgh Fringe with one. I actually auditioned for a drama school and got in but ended up choosing to go to music college instead so I guess if I wasn’t doing music, I would definitely be doing the acting.

J. It’s not as easy as it looks. You have got to practice 24/7 and always be promoting yourself to get where you want. Basically, be prepared to put the hours in.

R. Don’t get disheartened when you get knock backs because you will get them just keep pushing and use them to push forwards.

TYDL's new single 'Skeleton' is available to stream and download now. Have a listen to it in the player below.

1 hour 27 min ago Following on from the release of his surprise EP 'Heart Of The Night' last month, producer Hudson