Anti-Flag rediscover their voice in the age of Trump

Anti-Flag rediscover their voice in the age of Trump 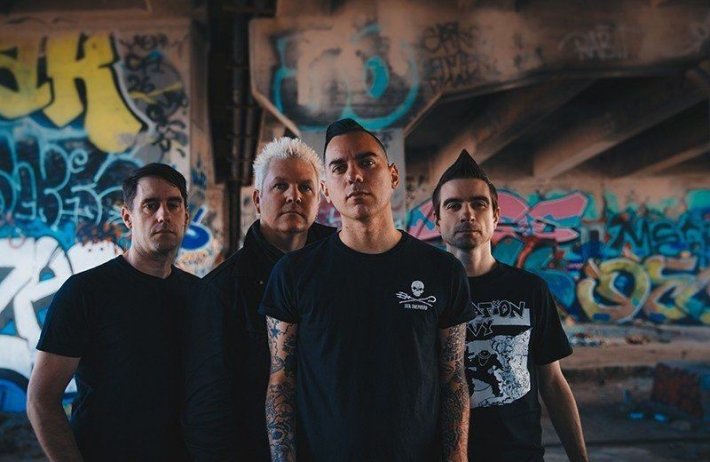 Having been one of the most prolific political punk outfits for the last two decades, US outfit Anti-Flag have been no stranger to confrontations. The band have attended demos, protests and ceremonies across the United States in recent years, all looking to undo the policies that Donald Trump's presidency has brought to the country. And having just released a trilogy of albums that chronicle this divisive time, we caught up with their bassist Chris Barker at Slam Dunk festival over the weekend to find out what they have been up to and where they plan to go next.

Hi Chris, how are you today?

Very well. Having a good day. It’s our last day of tour so we are ready to go home.

How long has the tour been going?

It’s been about five weeks. So my body is tired, my brain is non-existent but I’m going to do my best to answer your questions promptly and accurately.

Well firstly, you just finished your set on the Punk in Drublic stage. Did you enjoy that?

I thought it was great. To me, it achieved the goal and it’s a very simple agenda we have when we go into a festival show, which is to let people know that if they are looking for a band that opposes racism, sexism, homophobia, transphobia and all the bullshit you see rising around the globe in 2019, then there is one over here.

And you recently released a trilogy of ‘American’ albums, which the final one ‘American Reckoning’ arriving just a couple of months ago. What was the inspiration and reason behind making those albums?

Yeah it’s interesting because from the outset, with ‘American Spring’, there’s a lot of optimism and a lot of hope. It seemed like the end of the Obama era might bring a collective sense of work towards something greater, and then we had the election of Donald Trump and regressive policy became the way of the day. So with ‘American Reckoning’, it was about working out which songs of those last two records resonated in such a way that they are applicable right now. So we wanted to refresh them and that was the story behind that. There are a lot of lyrical and musical themes that tie all the records together, but for me it’s mostly about the politics and the arc of the story. And making sure that the messages on the 2015 record got refreshed for the 2018 and 2019 Donald Trump era.

And ‘American Reckoning’ was an acoustic album of covers of the previous albums. I remember Bruce Springsteen once said that he started playing some of his songs acoustically to make the lyrics stand out. Was that what you were hoping to do here?

Yeah it puts the agenda right at the front of the song. And beyond that, when you make a record and you go on tour and you’re a band that has been together for a very long time like Anti-Flag has, your setlist is maybe one or two songs from that record. So sometimes ideas and pieces of art that you really believe in get cast to the wayside and they only exist in that form. For us, it was just a chance to say, “Hey! This is one we really care about. I hope you do too”.

Yeah because when you are doing a festival, it’s a mixture of people who know who you are and some that don’t. So when you are putting together a short set for a festival, what are the decisions behind your choices? Are you going to go for the classics or material that is more relevant?

For me, the same songs that resonate with people are the same ones that resonate with me. I know I have a lot of friends in bands that will look side-eyed at their back catalogue, like they are embarrassed of it, but there isn’t a single song of ours that I don’t believe it. So I want to represent all the records, all the eras of the band. We grow and change as people but there is a song on the first record called ‘Fuck Police Brutality’, and the police are murdering two black people a day in the US. That song is just as relevant in 2019, if not more, than when it was written in 1996, so I want to make sure our politics are focused and that’s part of writing the setlist. Beyond that, I want to give the people what they want. I want to play the hits.

And you said that you have just finished your tour, so what are your plans for the rest of the year?

Yeah, so we finished writing a record recently and so we are going to record it in July and do our best to have it out by the end of this year or beginning of next year.

And this won’t be part of the ‘American’ theme though?

No this is a whole new thing. We’ve got a lot to do globally at the moment. I mean there are elections in Europe right now, there are elections in America in the fall of 2020, so it’s really about focusing and harnessing this energy that we have. There is a rise of fascism across the globe right now, and with that rise, there has also been a rise of people willing to fight it and stand up against it. So what we really need to do is find commonality, find the right and proper ways to put those folks in our sights, and make sure that we challenge hatred and bigotry with every breath we take because that’s the work we need to be doing right now. You know this very well in England right now. It’s a tumultuous time, it’s a divisive time, so if we can focus on the commonality we have amongst each other, I think we’ll rise over political division and corporate division. Because that is where it comes from, it’s just people in power trying to maintain their power. And Donald Trump has been a dog whistle to racism around the world, so we need to tackle that and that is the focus of the band.

Anti-Flag's latest album 'American Reckoning' is available to stream and download now, and you can check out the single 'The Debate Is Over (If You Want It)' from the record below.

13 hours 28 min ago With her eagerly-awaited new album landing in the coming months, Billie Marten has now unveiled t