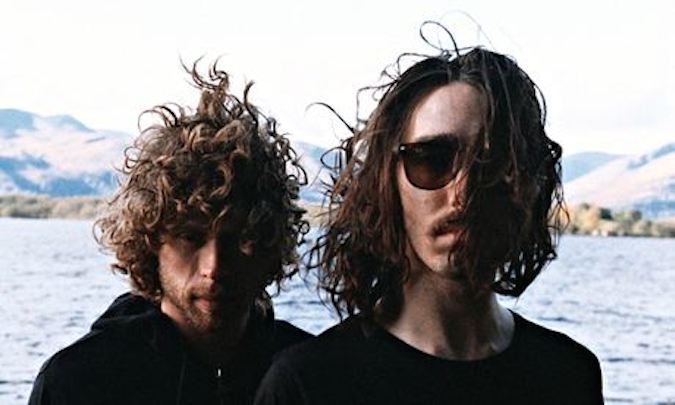 Features, Artist of the Week
Reptile Youth are a bit playful like Frankie were, a bit provocative, with a keen awareness of the value of controversy. They have songs with titles such as Be My Yoko Ono and Shooting Up Sunshine, and their videos and artwork feature all manner of stylish unpleasantness and fauxmoerotic imagery. There is a sense that it is their duty to be sensational, and if they don't always succeed, or it sometimes comes across half-cocked, at least they're trying. One of them has a moustache: it is very wry. Their wryness tends to undercut their every power chord and thunderous beat, but then, we could swear Daft Punk seemed too good, too knowing, to be true when they first emerged. Besides, it isn't all irony round their way. According to Lasse Martinussen, director of the video to their latest single Above, they're the real deal. "I had heard about their crazy shows in China so they already had this strange, almost ancient, mythology around them," he marvelled. "The lead singer was beyond performing; almost sacrificing himself to his biggest belief, while the bassist was hypnotising through the music. It was something I had never experienced before; something tremendous, sexy, epic, violent." There is a very welcome feeling of overreach throughout the album. It's exceedingly diverse: power ballads rub (padded) shoulders with disco, synth pop and punk. Sometimes they suggest a hipster take on something defiantly un-hip - INXS, perhaps. Colours is like a bad Bowie impression, by which we mean a decent impression of Bowie when he'd gone off the boil as opposed to an inaccurate one of Ziggy-era DB. The title track opens with OTT riffing before segueing into ZZ Top-esque bionic boogie. Epicness abounds on Structures, almost reaching Muse levels of symphonic grandeur. There is ambition here, and evidently a budget. Where You End I Begin starts with the eruptive chorus and goes from there, building towards a full-on coda like a glam-era anthem. Above is groovy in an AOR Fleetwood Mac/Lindsey Buckingham way, even if, as we say, the video indicates artier, indier forces at work. It's pretty potent, up to and including eight-minute blow-out Diseased By Desire, complete with baggy freak-out. Not every track kills - Dead End sounds like U2, although even there it seems deliberate: "I feel like Moses on a mountain," sings Kristiansen, a neat encapsulation of Bono hubris if ever we heard one. We're All In Here is a mixed blessing, depending how excited you are by the prospect of a rave-era Frankie. Still, at its best, this deserves, even demands, to be heard. To be stolen or bought. Words courtesy of Paul Lester @The Guardian - Found Here - http://www.theguardian.com/music/2014/may/09/reptile-youth
emergency loans college students

21 hours 54 min ago With her eagerly-awaited new album landing next month, Nerina Pallot has now unveiled the next cu

3 days 13 hours ago After breaking through with her incredible cut 'miss u' last month, which found support on Wonder