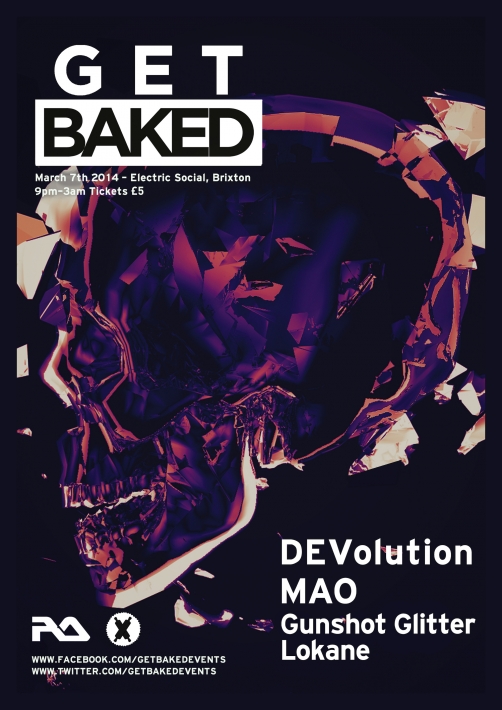 ► After selling out the launch night party back in November, GET BAKED returns to Electric Social in Brixton on Friday 7th March 2014 for another night of non-stop beats, courtesy of some of the best underground electronic prodigies in the London music scene. Presented by The Bakery (The Bloody Beetroots, Benny Benassi, Parachute Youth) and Mystic Sons (www.mysticsons.com) make sure you grab your advance tickets early due to limited ticket space!

► Headlining the second in this series of events comes from melting pot of electronic musical influences aptly called DEVolution. The duo, haling from Southampton, are causing a stir (not for the first time) on Soundcloud/iTunes with their new EP Transition (iTunes - http://bit.ly/TRANepDEV).

Comprising of Pete Devereux, conquered the mainstream once before as half of Artful Dodger, and his fellow accomplice Tom Devos former artist from Size Records the pair have recently been championed by Annie Mac and Mistajam, recently signing to his label Speaker Box.

For those who may have caught the pair perform at Fabric Live in late 2013, it is evident their mission is to ignite venues with real bangers, proving just why getting them on the bill seems to be the new ’in’ thing.

► Next up on the bill is MAO, who have just completed their debut album, a mixture of sub bass, broken beats, R&B, shoegaze, lush strings & futuristic synths that expresses their ability to create beautiful & melancholic soul music that also thrives on the dancefloor. Vocals performances from Lulu James, 14th, Marin, Dems & Seasfire are the icing on the cake, injecting even more soul into their sound.

MAO are also working on their live show with Creative Artists Agency to tour the album; whilst focusing on music & live performance the show will also be visually stunning & based on the strong imagery they have created in the past.

► Yeah Boy, the side project of Parachute Youth’s Johnny Castro is gearing up to release debut track ‘Can’t Get Enough’ early 2014 via Warner / Sweat It Out!

It hasn’t taken long for industry and media to take notice of this project, described by The Line Of Best Fit as ‘solid, appealing synthpop’ new single ‘Can’t Get Enough’ is a fresh and funky, feel-good record.

With Zane Lowe already onboard, spinning the single ‘Can’t Get Enough’ on Radio 1 and a full EP coming next, watch this space in 2014.(https://soundcloud.com/yeahboymusic/yeah-boy-cant-get-enough)

Support artists to be announced soon. Ticket information below through Resident Advisor:

10 hours 23 min ago With their eagerly-awaited new album landing in just a few days, Yard Act have now unveiled yet a

10 hours 36 min ago Following on from a string of enticing folk-inspired offerings over the last year, Bristol-based