Their new album 'Gears Of The Giant Machine' is out now 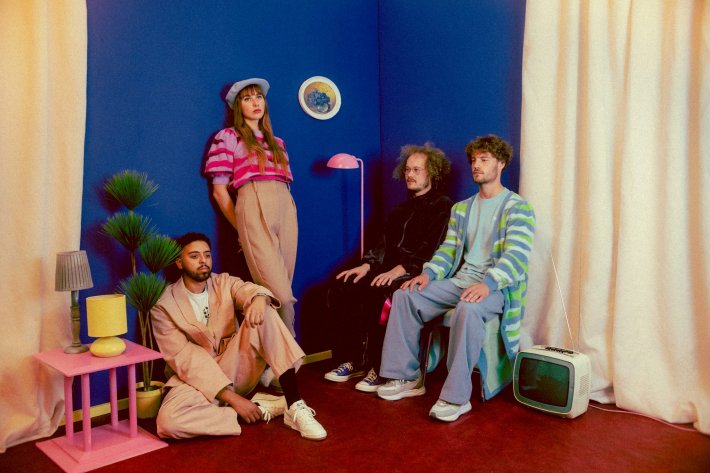 After spending the last few months churning out a broad and shimmering array of delights, Rotterdam-based outfit Dragonfruit have now returned to deliver their vibrant new album 'Gears Of The Giant Machine'.

Channelling a warm and sweeping soul-inspired direction from start to finish, 'Gears Of The Giant Machine' makes for a wonderfully captivating listen. Filled with soaring tones, groove-filled hooks, and some brilliantly bouncing vocals layered throughout, this lot already have such a strong and commanding grasp of their sound.

So with the new album out now, we sat down with them to find out more about their background and what has inspired them most over the years.

Anton: I don’t vividly remember falling in love with a specific instrument but with film music in particular. Someone was playing all these movie soundtracks at an open day at a music school and I was just blown away by that. That someone happens to be playing piano, so I went to that teacher, I thought he was nice, and so that happened!

Danique: I guess I have always been in love with singing. My parents have all these videos of baby Danique singing and dancing everywhere. When I got older I fell in love with guitar and piano, but I never had the patience to learn how to play. I needed it to sound good straight away and got so frustrated that I never pulled through. I still regret that to be honest. Last year I fell in love with drumming, and had a few lessons with our drummer Thijmen during lockdown. But we got really busy finishing up the album and then everything slowly opened up again, so I stopped. And now I still suck at drumming.

Anton: I do not come from a music collector family, so I didn’t grow up on hidden gems and very specific music. I think the stuff that was mostly played as old skool rock n roll and blues. Later when I really started getting serious about playing piano I found the likes of Oscar Peterson, Bill Evans and Herbie Hancock and just fell in love with jazz music.

Danique: I always loved pop and rock. I was always super intrigued by catchy melodies: may it be a vocal line or a guitar riff.

Anton: Oh I really wouldn’t know. When I was growing up I never bought music myself since my dad had a lot of CDs which he would play. But if I think back on what’s the first music I really listen to myself, it would be Bob Marley and the Wailers and Oscar Peterson.

Danique: Oh that must be something cringy. Maybe a hitzone CD or someone from Idols. Oh wait, you know what: besides a couple of dutch acts for children, I was a huge fan of Belle Perez when I was younger! I loved listening to the albums “Que Viva la Vida” and “Gotitas de Amor”.

Anton: Ooh that’s a hard one and probably this answer will change every week but… now I would say ‘’Stone Or Lavender’’ on the new Hiatus Kaiyote record ‘’Mood Valient’’. I studied a lot on piano so that sound will always have a special place in my heart, as well as string ensembles due to me falling in love with creating music due to soundtracks. The arrangement of the song and the way it moves is such a piece of art that I would’ve loved to have come up with something that beautiful.

Danique: “Circles'' by Mac Miller. One of the most interesting and complex feelings to me is that reflective and calm moment of clarity during a period of feeling down/ depressed. I always call it hopeful melancholy. Circles is my soundtrack for that feeling. When you’ve been feeling mega grey and flat, and you haven’t been able to do anything that day so you decide to go for a lil walk. Once outside the wind is the perfect kind of cold breeze that refreshingly kisses your cheek, the sun shines and the world is weirdly colorful. Everything it’s still running its course besides you and you just walk through it and quietly observe. I put on “circles” and think: “fuck, I really feel for myself but at the same time, how beautiful is it that I’m a human being with all these intense feelings? Life is really complex but also kinda cool.” I can’t even put it in words but when I listen to circles, it all makes sense to me. The things I’m feeling and thinking sometimes but can hardly translate to words.

Anton: I usually stuff my head with a lot of different music that I discover throughout the month. It changes every one or two months with what I’m listening to and studying, so it's always a bit of a melting pot of different musical cultures. So it isn’t really a conscious thing I think, my brain just takes what it heard in the months before that moment and puzzles something together I suppose haha.

Danique: I pace around the room a lot. I also like to write in the bathtub sometimes.

Anton: Denzel Curry & Kenny Beats’ ‘’Unlocked’’ is on repeat. If you don’t know this album, go now, check it out and come back to this interview. You will be a better person for it. If you want bonus points: Check out the insane animated short film they did to accompany the album on Denzel's Youtube page.

Anton: I want to give a hundred answers. Anderson .Paak would be pretty dope to open for since he’s a huge inspiration to our music. But I also wouldn’t pass up opening for a legend like Erykah Badu.

Danique: Pffffffff that’s a tough one. I agree with Anton. Love Anderson Paak. Thundercat would be epic as well. Another big inspiration!

Anton: Now that our album is out in the world, it's so amazing to see that it touches so many people all around the globe. Getting messages from Japan, the US, the UK, South America it's just amazing to see that so many people resonate with something that, not long ago, was just an idea sitting on your hard drive that was making you anxious. Also talking to people after shows and hearing you were able to connect to them in some way is always very dope.

Danique: When you come up with a new melody and everyone, including yourself immediately gets hyped and excited about it. That shared moment of freshly fuelled inspiration where we’re all extremely feeling it. And ofcourse, seeing people at our shows have a good time or when people tell us they really relate to a certain song. Music is such an important part of life. Like I said with “Circles”, a lot of songs are soundtracks to certain feelings we have, things that occur or periods in our life and it’s really amazing and still a little crazy to hear that our music can be that soundtrack for someone else.

Anton: For me it can be the constant struggle and pressure of creation. It’s something that has massive ups where you feel like you can take over the world but also massive downs when you feel like you lost every ability you had to create. Another thing that I was never told is how many tasks there are to do beside just creating and playing music. Sometimes it can get a bit overwhelming if you don’t watch out.

Danique: Like Anton said, being an artist also means being an entrepreneur. Running a business. That really sucks sometimes. It can get confusing or overwhelming. I also have a huge love/hate relationship with writing. It’s so hard to finish songs sometimes… It can be quite painful or confronting. But once it’s finished, it’s always worth it.

Anton: Just do what you do. If you really believe in what you make and you really dig it, someone else will too. Just say ‘’fuck it’’ and do your thing.

Danique: Better strong and wrong. Dare to be ugly in order to really be beautiful. I was afraid of making mistakes, not being good enough and others thinking I’m this or that. But it resulted in me being careful or holding back sometimes. It doesn’t really matter what other people think, cause people are always going to think things no matter what you do. So fuck other people. Do what you love and do it with everything you have. I’m still learning to let go and learning that it’s okay to make mistakes. And I still need to hear those words every once in a while: better to be strong and wrong.

Dragonfruit's new album 'Gears Of The Giant Machine' is available to stream now. Check it out in full via the player below.

DRAGONFRUIT · Gears of the Giant Machine

1 hour 18 min ago Following on from the release of their highly-praised 2020 sophomore LP 'So When You Gonna...', D

22 hours 14 min ago Having already found huge support for his run of releases over the last few months, progressive a