His new single 'Don't Say' is out now 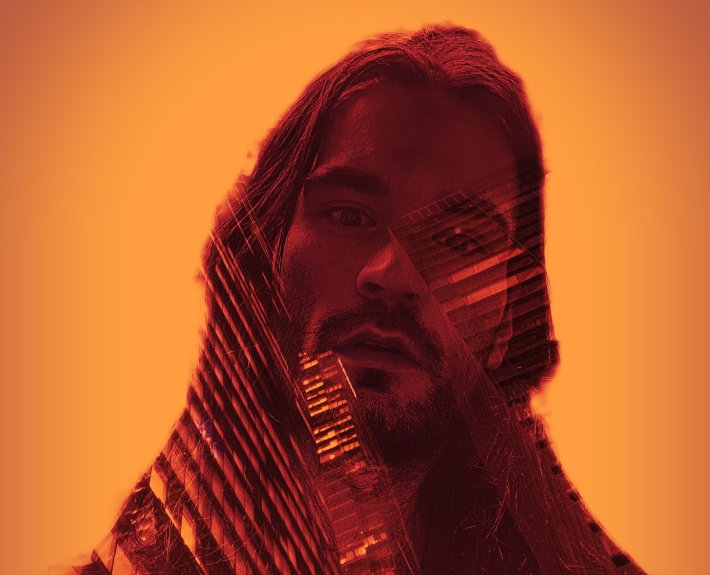 Following on from the release of his much-loved debut album 'Melochrome' earlier this year, Toronto-based artist Five.others has returned to deliver his sweeping new single 'Don't Say'.

Lifted from his newly released follow-up EP 'V.O', which is available to stream now, 'Don't Say' sees him explore more of that warm and breezy direction he has cultivated for himself. Filled with breezy tones, effervescent textures, and his own ethereal voice at the helm, he is showcasing himself as a wonderfully rousing addition to the world stage right now.

It was most definitely guitar, in terms of playing an instrument. I started playing around grade 9, or 14 years old or so, at the time I would’ve described myself as someone who loved music but had absolutely zero musical talent.

When I started playing guitar I wanted to be John Frusciante of the Red Hot Chili Peppers. My parents all have good tastes in music so I had a broad knowledge of music as (and for) a kid. I definitely had a variety of phases through high school and such, just trying to find things that spoke to me, punk and R&B were probably the first ones that I seemed to reach out to on my own.

I mean, I listened to some of my parents’ CDs, I also probably had Backstreet Boys “Black and Blue” and Spice Girls “Spice World” when I was a kid, but the first CD I ever bought wanting to learn guitar was Red Hot Chili Peppers “Blood Sugar Sex Magik”.

There’s probably a lot, it’d be nice to be able to afford a place to live! I think I frame it more like there are certain songs I hear that I think are masterpieces, I just think to myself that the people that worked on those songs should be taken care of for life. Sometimes you’re just in a moment and it all clicks, like “this song/part/album is everything to me right now”, at a show or in a club, or even hearing a cover, a memory. Or maybe a recording that I’ll just listen to over and over for a night. Maybe it’s a beat, or a riff, or a vocal performance, or a lyric, or the general vibe, all these things that I become fixated on. I think last year around this time last year it was Mas Que Nada and Wuthering Heights. Hey Ma is an all timer for me. Mostly I think it’s less about wishing that I wrote them than it is wishing I can be part of something new that might make someone else feel the same way.

So far this year I have been binging, two weeks obsessively working on songs, before spending the next two working on editing or other things entirely. Honestly, I try not to think about it too much, I am an overthinker naturally. I’ve been focusing on letting my mind go where it wants to instead of trying to control it too much. I think even from a personal self improvement standpoint I’ve been trying to accept myself more, and from an artistic perspective that means making it up as I go as much as possible.

I’ll make a voice note of an acoustic guitar take or a simple beat to listen to on the bus or such, maybe think about more specific words or another part. Maybe it goes somewhere quickly or maybe I’ll get back to it months later when I’m stuck on other things.

This month it’s probably been The Specials and Led Zeppelin. But really I’m enjoying getting to see more live acts, as well as attending and hosting Open Mics , doing sound, or playing here in Toronto. From warehouse DJ sets to hardcore shows to someone doing acoustic covers to jamming with friends, I think I just appreciate being around music and the communal good vibes.

Lianne La Havas. I mean she’s amazing, the vocals of course, but something about her guitar playing speaks to me. I’d like to think I play a bit like her. I mean I think it’s a great pick but I don’t really think about anything like that to be honest.

I think that the best part about music in general is the communal enjoyment, with all art really. I think really nailing something with other players is always special, I guess that camaraderie or teamwork. As an artist I’m chasing the brief moments of making something new and feeling the potential of it being really good.

Well I think I am my own worst enemy… so how long can this answer be? I’ll try to keep it specific as an artist - having opportunities to contribute? Promoting myself? Having ambitious visions for my projects? Getting anyone to listen without ever posting on social media? I think I spiral into self doubt quickly.

That’s why for now I just try to focus on making songs. I think I need to do it to stay sane. At times it feels like the most productive thing I can do.

The only good advice I can give is that which I need to hear myself. Be bold in trusting yourself, in travelling your own path, in finding your balance in all things, including pushing yourself and appreciating where you are.

Five.others' new single 'Don't Say' is available to stream now. Check it out in the player below.