Getting To Know... Freddie Yates

Getting To Know... Freddie Yates

His new single 'Walking Alone' is out now 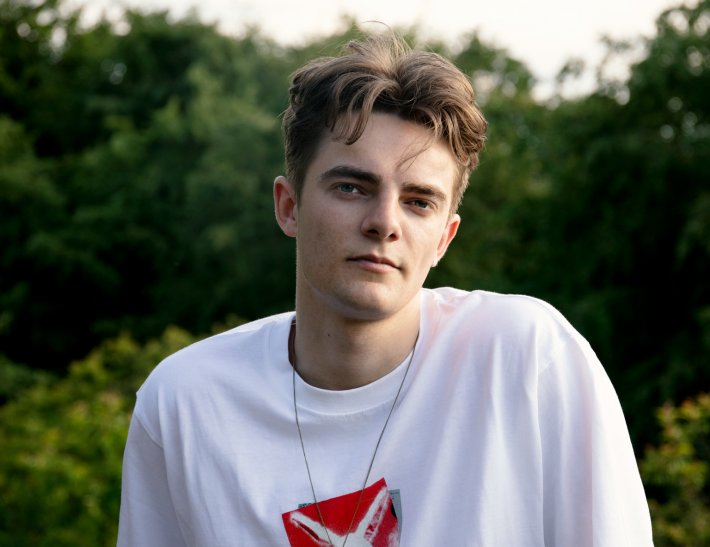 Following on from a bright and shimmering array of offerings these last few years, London-based singer and songwriter Freddie Yates continues his upward ascent with the soaring new single 'Walking Alone'.

Marked as his final single before pursuing a more electronic direction, 'Walking Alone' makes for a wonderfully captivating listen. With his warm and uplifting voice layered over a sweeping bed of euphoric pop-rock production, this new release is filled with bold and adventurous texture from start to finish.

I started playing drums when I was about ten, and once I picked up those sticks I just couldn’t put them down again. I remember trying to learn that iconic fill from Phil Collins’ ‘In The Air Tonight’ and playing it over and over again for hours… It must have driven my family mad, but I found it so fun. These days, I live in a flat in North London and it’s a bit harder to find the space to practice drums, so most of the time I’m playing the guitar, using my Nord Lead 4 synth or tinkering around on Ableton.

I always used to listen to a lot of rock, alternative and indie music – artists like Red Hot Chili Peppers and Kings of Leon were a big part of my early musical education. My dad used to play the Red Hot Chili’s ‘By the Way’ CD in the car a lot, and I used to try figuring out all the parts on my drum kit.

My mum bought me The Offspring’s “Greatest Hits” album when I was pretty young, but since she didn’t want me to hear any songs with swear words she had the guy at the CD shop take off those tracks completely... I think there were only four or five songs left by the time he was done! But I loved that record and played it on repeat for a long time. I can probably still remember all of the words to “Self Esteem”.

I would have to say “Fake Plastic Trees” by Radiohead. Everything about that song is just perfect, it’s so emotional and Thom’s lyrics are really profound. Social commentary in lyrics can sometimes come off as a bit preachy or disingenuous – it’s something I try to watch out for in my own music – but these land in a really heart-felt and authentic way. That is definitely one song I wouldn’t have minded stealing if I could go back in time.

For ‘Walking Alone’, like most of the ‘First Sign of Rain’ EP, I started on my acoustic guitar and quickly worked out some chord progressions. For me, the vocal melody usually comes second, and I tend to spout gibberish lyrics into my voice memos and then work back through them later a bit more thoughtfully. I rarely go into a song knowing what I want to write about, but I find that quite liberating in a way – who knows where the song is going to arrive!

I’ve started writing a lot more on the synth and the piano lately, though. I have a bunch of new material coming out in the next few months which goes in a much more electronic direction, for which I generally put down the guitar to get outside of my comfort zone. But you never know where the inspiration is going to come from, so you just have to keep grinding and writing until you land on something that really excites you.

I’ve mainly been listening to a lot of electronic musicians like Apparat, Howling, Klangstof, Luwten and Weval. There’s a lot of very exciting music coming out of Northern Europe, places like Germany and the Netherlands, and it’s definitely changing the direction I want to take my own sound in. The first time my mate played me a song by Moderat, I said to him “this is the kind of music I want to be making”.

I feel like a lot of “guitar music” genres have been pretty stagnant for a while now, whereas there’s a lot of exciting things happening within electronica and hip-hop. There are a few exceptions, like I really enjoyed the latest Fontaines D.C. album, and Adrianne Lenker has been putting out some great songs, but generally I don’t listen to so much indie stuff these days.

Probably Moderat, the added bonus being I would get to see them doing a show together again. I don’t know how long it’s been since they last played together, but I would love to have the chance to see them live. Getting to stand on the same stage would be something else.

I really enjoy the actual writing and producing process. It’s definitely time-consuming and you can easily spend hours on end going in circles and scratching your head, but when you finalise an idea or a song it’s a really cathartic experience.

Getting to jam and perform alongside your friends is fun and rewarding as well. My long-term band “The Vacant” had to go on hiatus at the start of 2020 because of the pandemic. One of our members is finishing his PhD and the other moved back to Switzerland, so I have definitely missed the collaborative aspect. But currently I’m getting a band together in the hopes of playing some live shows in London, so I’m looking forward to that side of being a musician again.

Marketing, without a doubt. I’m sure a lot of independent musicians feel the same way, but the way the internet has democratised making and releasing music also means that there’s a hell of a lot of noise to try and cut through if you want to be seen. It is easy to get lost down the rabbit hole of tracking numbers and comparing yourself to others, but it’s all just a distraction from the music. And that’s what it’s really about.

“Keep at it”. I have definitely faced my fair share of rejections and criticism in the past, but you just need to roll with it and keep persevering. Being a musician and learning to produce is really about putting in the time and just doing a bit every day. Whether it’s reading about production techniques, doing some mixing, learning a song, or practicing scales, it’s not always easy to see the progress as you go, but it definitely pays off in the long-run if you invest time in your skillset.

Freddie Yates' new single 'Walking Alone' is available to stream now. Check it out in the player below.

2 hours 24 min ago Following on from the enormous praise for her 2019 self-titled debut album, SASAMI is back to ann