Getting To Know... The Great Emu War Casualties

Getting To Know... The Great Emu War Casualties

The band's new EP 'HAPPY BIRTHDAY JOE' is out now 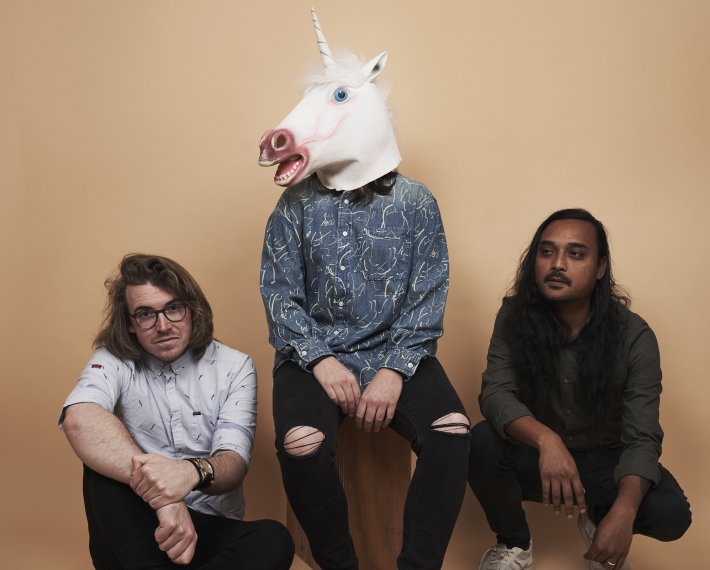 Having spent the last year releasing a wave of bold and vibrant psych-rock offerings, Australia's The Great Emu Was Casualties now return with their latest EP 'HAPPY BIRTHDAY JOE'.

Cementing their love for all things unusual and diverse, this new three-track collection sees them explore the outer limits of their sound like never before. Filled with a bold and eclectic attitude, sweeping hooks, and some extremely memorable moments, their new EP is a fresh and dynamic insight into the trio's collective mind.

Saskia: Actually the bass… I thought I was so cool because bass is like the guitar that nobody knows about. Little did I know that bass is actually considered the lamest instrument… but actually that suits me better anyway…

Joe: The first guitar I bought for myself was red Yamaha Pacifica and I thought it was the best thing ever. It cost me all the money I had at the time and I played it for years; all through my teens and into my early twenties. I still have it now, kept safe in my Mum’s house, and it still gets played when I get to visit. That’s been a while now though… Blummin’ Covid.

Joe: Inspiration for me is kind of just a grandiose term for “things happening”. Spending the majority of this year locked down in Melbourne has brought everything to a bit of a creative standstill. The 2020 creativity well is running dry. I think of the Happy Birthday Joe record as a weird conglomerate of b-side tracks from throughout 2020 grouped together under the category of disguised love songs. See what you make of it.

Joe: I was a total emo kid… Does anyone remember that real brief period in time where emo was falling out of trend and all the emo bands were trying to reinvent themselves and Panic at the Disco released that album that was like a Beatles cover band rip-off and Fall Out Boy started turning pop? That specific moment in time is “my jam”. I think Viva La Vida came out that year too actually… And that’s Coldplay’s best album. And, also, I was 18 so that helped. And now I am old.

Saskia: J-rock… lol. Omg so obsessed. I was definitely a weeaboo although I pretended I wasn’t cos ‘I liked j-rock and not anime’ (I definitely also liked anime though). Yes it is sad… but it also inspired me to pick up the bass later in life, they have the craziest bass lines.

Saskia: I get inspired by good music. I was a music fan long before I became a music player and I’m also secretly super competitive so if I hear something amazing I want to be at least as good as that if not better (although in reality that doesn’t happen… What did the Stones say? Something about not getting what you want…?)

Bibek: Every time I get anything from Joe and Saskia.

Joe: I really like to try and be as original and creative as possible. As far as a “voice” in music goes, I feel like mine’s been heard before and so it’s important that the content of our music is more than “love you baby” cliches. Music has a tendency to lean towards ego, bombast and show-offy-ness (not a real word) and so I like to try and offer up an alternative to that where possible. Does it work? Probably not.

Bibek: Been watching heaps of zildjian live sessions and also some crazy bollywood compositions by A R Rehman.

Saskia: So many (what else to do in six months of lockdown…?) but my favourite ones recently are like Oumou Sangare who I’ve somehow only just discovered and Songø who I think are hands down the best band in the world to debut this year. They are the future of music for me (but I guess the future of music for most other people is like “Spotifycore” and idk something on TikTok or whatever do I sound enough like an old biddy yet). But also I’ve been bingeing Future Islands’ new record which is incredible.

Joe: I’m checking my recent YouTube history for this one… All We Are, Vampire Weekend, Unknown Mortal Orchestra, Everything Everything, Bon Iver… How boring. This could be any point in time and my answers would be the same.

Joe: I made a big mistake a while ago by writing a song about some close friends of mine but not disguising their identities at all, and it wasn’t in any way a flattering portrayal of them. They were really cool about it, and supportive of what I was doing in music, but on reflection I’m ashamed of that. That’s on a record I released with another band and it’s not something I revisit very often in part because of that song. Pretty much everything I write is either about or for the people in my life, I’m just getting better at disguising it now.

Saskia: I can’t write lyrics to save my life, that’s Joe’s job. But geez that’s moody Joe ^ stop being such a moody glum bum.

Bibek: Wish I could write songs.

Saskia: If by ‘funniest’ you mean ‘most cringeworthy’… well gee whiz there’s just so many. Oh one of the worst ones was going off to do a wedding gig in Wales in the middle of nowhere. It was cobbled together like the day before for unknown reasons so we’d never even had time to meet each other let alone do a band rehearsal and we had to learn like 30 songs that evening. I worked my ass off all night thinking I’d more or less got it by the next day, and while we were in the van we’d all agreed that we’d play the original key of each song. Well actually while we were in the van I desperately needed to pee but we’d literally been driving through random countryside for hours and there was no pitstop to be seen for love or money (or pee). Finally I screamed that they had to stop or I was literally going to piss all over my pants and all over everyone in the van so we just stopped in the middle of this field and I ran out trying to hide amongst the wheat whilst trying not to get a hornet up my ass. The perils of being a woman. Oh yeah and also when we finally started playing the gig of course nobody had learnt it in the same key and it was a total disaster – I ended up just turning my bass off and pretending to play along. The good news is the guests were so shitfaced that they didn’t seem to notice or care anyway. Anyway this story literally had nothing to do with this band or being funny but I’ve typed it now…

Joe: When I was a kid, in an old band, we played this open-air community park show, and back in the day I refused to sing. You couldn’t have paid me to get near a microphone at 16 years old. So, we had another kid who was a singer, David I think his name was - we don’t speak anymore - and he showed up to the show complaining of not feeling very well. Well, we figured he’d just had a heavy night the night before and he was being a drama queen so who cares, the show must go on, so we ignore his complaints and play the gig. We were very very bad by the way. We were a minute or so into an awful cover of “Run” by Snow Patrol and he just suddenly drops to the floor. He passed out on stage. And there’s three of us, drummer, bass player and me, all looking at each-other, still playing the song, like, “what do we do now!?” so we did what any true professionals would do and played the rest of the song with David motionless on the floor. That song is over 4 minutes long. We finished the track to the least applause I’ve ever heard. Like, anti-applause. Then we got off stage as quick as possible. David was fine in the end I think but I can’t be sure because we’re not facebook friends which means he must hate me because that’s how that works. At the time it was such an awful experience for everyone involved, let alone David, but in hindsight it’s hilarious. They totally just let us get off stage by the way, and did not ask any questions about our maybe dead friend, which now I’m thinking about it is crazy. We carried him off to the grass and sort of just left him there while the promoter shouted at us for both not still carrying on the set and also not getting off the stage quick enough. Them's the breaks.

Bibek: Funniest would be trying to quantise the drums tracks after a whole day of recording.

Bibek: Rick Astley. Would be a dream to watch him after the set.

Joe: Jeff Bezos. He’d definitely sell all the tickets and there’s even a slight chance we’d sound alright in comparison. Unless he used his cash to hire some sick session musicians. Can I change my answer? Bill Gates. Same problem but at least we’d all get vaccinated for our troubles.

Saskia: Someone shit who we could majorly show up and everyone would be so surprised by how amazing we are. Sadly I can’t think of an act worse than us…

Saskia: I think I would’ve been some kind of administration assistant… oh wait…

Joe: I flipped a coin in college when it came to choosing what to study. Heads for psychology and tails for music. It landed on heads and then I failed my psychology exam so I’d probably have ended up in this situation regardless.

Bibek: I would be a farmer. I like growing stuff.

Bibek: It's okay to suck at your instrument.

Saskia: For god’s sake don’t overplay (I didn’t really listen to the advice and constantly get told to tone my playing down…).

Joe: I played a show once in Liverpool, in the UK, and somebody said to me “If you don’t shut that guitar up, I’ll shut it up for you”. Does that count advice? Whether it does or doesn’t, I followed it.

The Great Emu War Casualties' new EP 'HAPPY BIRTHDAY JOE' is available to stream and download now. Have a listen to it in full via the player below.

23 hours 26 min ago Following the release of her highly-acclaimed EP 'SHE' near the end of last year, Winona Oak has