Getting To Know... Hounds Haul

Getting To Know... Hounds Haul

The band's new single 'Riviera' is out now 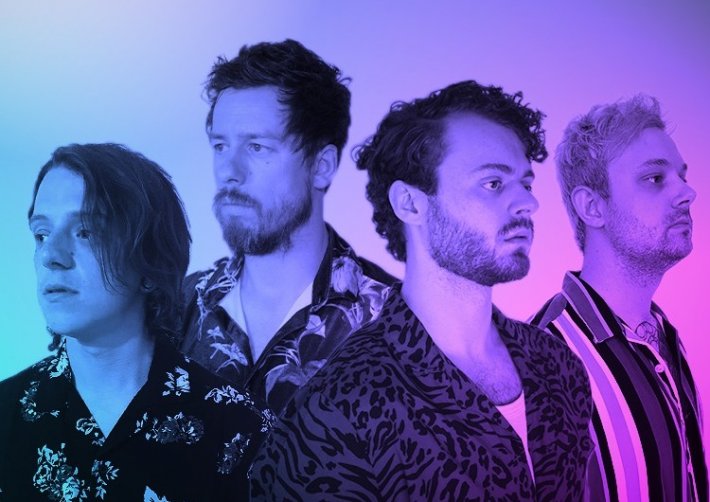 After first forming last year with a sound that has been described as "Depeche Mode meets Tame Impala", Buckinghamshire-based outfit Hounds Haul have continued that bold and driven sound as they now return with their latest offering 'Riviera'.

With its broad and danceable aesthetic, 'Riviera' makes for a fun and fresh comeback for the four-piece. Filled with pounding drums, killer hooks, and strong nods to the indie-dance era of the mid 00s, this new delight looks to see their profile grow even further in the months to come.

So with their new release of repeat for us right now, we sat down with them to find out more about their origins and what has inspired them most over the years.

Adam: I picked up the guitar when I was 14, so at the time, what kid didn’t want to play guitar. Loved it ever since.

Jamie: Honestly it was the bass guitar. All I wanted to do as a young teen was be in a band, but all my friends already played guitar. I knew if I played bass there’d be a good chance I’d get into a band and as soon as I picked it up I never looked back!

Rien: When I was a teenager I really wanted to become a famous guitar player. I often had dreams about me playing on a stage for tens of thousands of people. However, thanks to a really good piano teacher, I became much better and confident as a piano player, which is why I now absolutely love the keys and would not want to trade them! If I had the time, and didn't have neighbours, I would certainly want to learn to play the saxophone next!

We all enjoy different genres, but indie just hits all the notes for us. It allows us to express our thoughts and feelings in a way that invokes passion, mixed with some catchy licks to dance to. We get compared to Foals often, and yeah, we enjoy their music, there is a lot of heart in what they sing about which we love, but we take a lot of inspiration from other indie bands such as Tame Impala, Bloc Party, and Depeche Mode.

Adam: I never used to be into music until I got my first album which was a compilation album of Mod songs from the 60’s. From there, I started listening to Arctic Monkeys, The Kooks, The Maccabees, The Smiths, all things indie.

Jamie: Very lucky to be a teen in the ‘golden age of indie’ in the mid to late 2000s, I loved the strokes and the Arctic monkeys. Always been a huge Interpol fan, I'd have to say Antics is probably my all time favourite album.

Rien: I grew up in Belgium in the 90s, when there was a strong divide between people who liked electronic music and people who liked rock and metal. I was in the latter category. I went to loads of festivals, seeing Metallica, Iron Maiden, Sepultura,... Fantastic times!

Adam: Went to see a live gig of The Maccabees play their 3rd album in Cambridge, the quality and atmosphere was amazing, then something clicked, I wanted to do that.

Jamie: When I was about 11 my sister gave me a copy of Nirvana 'Nevermind'... changed my life forever.

Rien: Plaid - New Family. I certainly back then didn't see it as the start of any sort of music career plan, but thinking about it, that was probably the first time I started writing my own tracks, tinkering with Fruity Loops.

Adam: Usually something electronic or instrumental. I’ve got a thing for Chill Hop, artists like Bonobo and Maribou State.

Jamie: Something a bit chilled out to ease me into the day, Mac DeMarco always goes down well with the morning coffee and cigarette.

Rien: How I feel generally determines what I listen to. It could be gentle piano music, or some more upbeat Reggae. It could equally well be Davidian by Machine Head though!

Well the songs are about us as a collective, for everyone. While writing the songs our country was going through a very confusing time, and still is. So we write in the perspective of the people out there shouting for their voice to be heard.

Adam: Considering the bands infancy, and then going into lockdown, there have not been chances to really create some hugely memorable moments. I’m just grateful for all the support we’ve received throughout the year, the support is most memorable.

Jamie: Our first gig was at my favourite place in the world, the Craufurd arms in MK, have played there before in old bands but felt special to get back there and do it again! Riviera always spinning on BBC Introducing with high praise is also up there!

Rien: Hearing the excitement in Danny Fulbrook's voice when he announced our single on BBC radio!

Jamie: I’m a giant nerd really, most of my spare time outside of music is normally playing video games... bit of a cinephile too so watch a lot of films.

Rien: Wildlife. Nature. In particular, I love insects. I moved to the UK to do a PhD on butterflies! That's right, you can call me Doctor.

Adam: I studied Drama at Uni, so I’d probably be trying to get into acting, an equally harder profession, but it’s always been about music for me.

Jamie: Couldn’t really imagine doing anything else... Probably wouldn’t be anything exciting that’s for sure!

Rien: There is no other path. In each and every parallel universe, I am a musician.

Adam: I think we’ve still got a long way to go, but I’ve always been in the mindset of, just get it done. You have something you’ve made and want to show people, just do it, somebody is bound to love it.

Rien: Realise that if you like a song you've written, there are others out there who will also like it! Work hard, get your music out there, eventually you will reach them. Ultimately, what have you got to lose?

Hounds Haul's new single 'Riviera' is available to steam and download now. Have a listen to it in the player below.

4 hours 25 sec ago Following on from the release of their much-loved 2018 LP 'Resistance Is Futile', Manic Street Pr