Their new track 'Russia' is out now 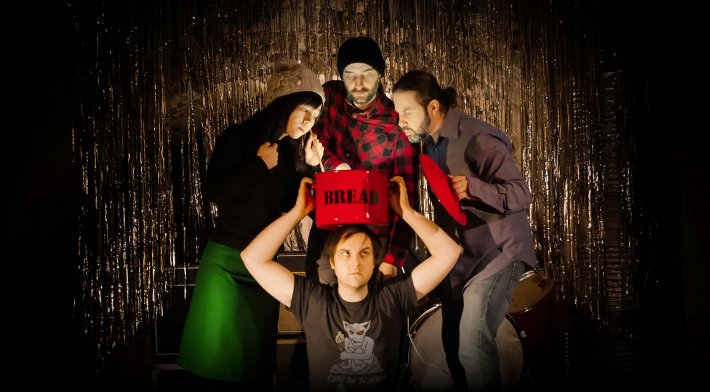 Lifted from their forthcoming debut album 'Small Worlds', which is out early May (vinyl can be pre-ordered from mountforel.com now), 'Russia' makes for an incredible broad and sprawling return. With nods to both folk-pop and post-rock aesthetics, the track grows from a soft and humble acoustic swoon into an all-out raucous affair, filled with killer hooks and a sweeping atmosphere.

What was the first instrument each of you fell in love with?

Ross Thompson (lead vocals/guitar): I grew up in a house full of music - classical, traditional, folk and rock, but it was always the guitar music that got me. Plus my dad had a few different guitars around and a small scale one that I would bash around.

Andrew Wakatsuki-Robinson (drums/toys): I always loved the french horn and bassoon, but ended up playing sax for some reason.

Ross: Around 16 I was drawn to bands like the smashing pumpkins. They were the first band I was really obsessed with. But apart from them, that was the time I was exposed to the classic bands - Led Zeppelin, The Stones, Cream, Humble Pie, Blue Cheer etc. Classic 60’s/70’s rock and The Pumpkins were essentially the soundtrack to my teenage years.

Andrew: I was into 20th Century Classical music like Shostakovich, Bartok, and Steve Reich. Oh, and Ska.

Ross: Everybody’s Got Something to Hide Except for Me and My Monkey – the rhythm section is relentless and the guitars are crunchy.

Andrew: We come to the studio with conflicting musical ideas and force them together until they sound like a song. A song we don’t like much, we throw away. One of us will put some gloves on, pick up mashed up musical pieces and try to convince the others it’ll work. And sometimes it does.

Who are your favourite artists that you’ve found yourself listening to recently?

Ross: Our songs aren’t so introspective - no woe is me.

What have been the funniest or most unusual moments in your career so far?

Andrew: We played a show in a beautiful art deco cinema but the whole audience was blindfolded. It felt like we were an act at Club Silencio from Mulhollond Dr.

Pete: Playing in a tent in the middle of nowhere for a group of scouts to help fund the purchase of a lawnmower.

Ross: At this point, anyone!

Andrew: Seriously, just to play in front of an audience at this point would be nice. Flaming Lips are doing those fun bubble shows – they would be interesting to try to open for.

If you weren’t musicians, what other paths do you think you might have taken?

Ross: Be ready to pounce when either luck or opportunity come along, cause you might not get a second chance.

Pete: Don’t take the piss during a soundcheck, it keeps everyone happier.

Mount Forel's new single 'Russia' is available to stream and download now. Have a listen to it in the player below.