The band's new single 'House Of Smith' is out now 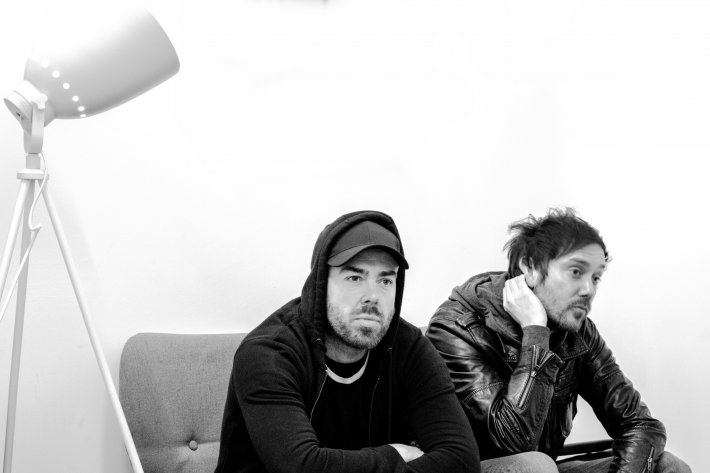 Following on from the success of their previous single 'Pieces', which has since gained 50k streams since its release, NOPRISM are now back to continue their upward ascent with the release of their latest belter 'House of Smith'.

While the inspiration behind the name may come from an in-joke about a Bar in Newcastle that they would never enter, the message behind the song is slightly deeper as it contemplates in a light-hearted manner the question of humanity's need to justify its own purpose. With a mixture of pulsing guitars and soaring synths, 'House Of Smith' takes the bold sound of Depeche Mode and brings it to a euphoric and energetic destination.

So with their new single doing the rounds right now, we sat down with them to find out more about their background and what has inspired them over the years.

Mark - Guitar, when i was about 11. My mate introduced me to New Order, Joy Division and the Cure and I was fascinated by the guitar melodies that hooked me in.

Andrew - I learned drums and trombone at school. Both of those instruments taught me pretty early to choose something more transportable. To be honest, learning to play instruments was kind of a means to an end for me. I started putting songs together with an old tape recorder when I was pretty young, but there’s only so far you can go using household utensils as instrumentation, so I picked up a guitar and taught myself the basics.

We’ve been in bands for a while - mostly guitar driven - influenced by post-rock artists like Mogwai, Godspeed, and angular US punk, such as Q and Not U. Both our bands though have always tried to maintain a pop sensibility. We often cite New Order, LCD Soundsystem and Prince, but being totally honest Erasure and Pet Shop Boys have had as much influence as anyone else in forming our desire to add a little juice to the mix. Although we try to write songs that have pop hooks in them, we want things to have that heavy sound like Justice and Carpenter Brut, but also have some of those big soundscapes from the post-rock bands we love.

Mark - As mentioned above, New order, Charlatans, Stone Roses, but also US punk rock and post-rock.

Andrew - Anything and everything. I loved British indie bands and pretty much worked my way back through the eras from britpop, shoe gaze, new wave, punk…My parents also had a pretty decent record collection and I loved bands like Pet Shop Boys, Crowded House and hours and hours of Motown.

Andrew - I just spent my entire youth wanting to be Tim Burgess.

Mark - Something quite chilled out, usually something a bit more ambient like the Album Leaf until i wake up properly.

Andrew - Usually whatever Mark has sent me the previous night on one of his Spotify trawling sessions.

I’ve written some, but they’re all locked away. I don’t really like lyrics to be too specific. Every song I write has a theme or a reference point, but .I’ve always loved the abstraction of lyrics and having people make up their own minds about their meaning.

We’ve only been releasing music as NOPRISM since Feburary this year, but we’ve so far been on BBC introducing quite a few times and been well received in press and on radio. Like most bands, we want to play live and hope that can happen soon. We’ve still not played live yet - in front of real people. Spotify streams are nice but it’s not the real thing. We got to do some good things in our previous bands, playing Leeds/Reading festival, Wireless, as well as doing an MTV tour with Editors and Maida Vale sessions. So it would be nice to do that again.

We’re both long-suffering Newcastle United fans, which may or may not have provided the aggressive edge to how we like to sound. There’s a lot of frustration to get out.

Don’t be influenced by what the current trends are in music. Do what you want and what excites you without worrying too much about what anyone else thinks. Also, don’t listen to advice from new bands.

NOPRISM's new single 'House Of Smith' is available to stream and download now. Have a listen to it in the player below.

2 days 11 hours ago Following on from the release of their much-loved 2018 record 'Shiny and Oh So Bright, Vol 1 / LP