Their new single 'Caves' is out now 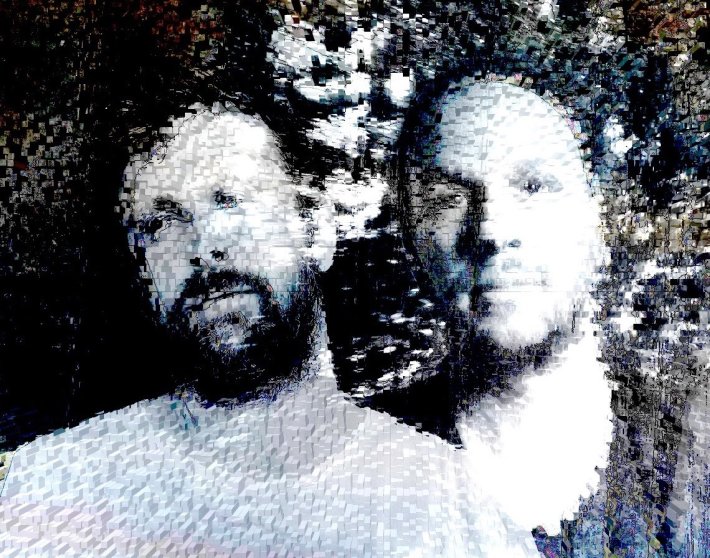 While the duo have already made a name for themselves as writers and producers for the likes of Two Door Cinema Club, Bloc Party, Kaiser Chiefs, James Bay, Aquilo, and Linkin Park, London-based REUNIØN have also been making waves with their own project and now return to deliver their newest effort 'Caves'.

Opting for a warm and sweeping direction this time around, 'Caves' offers up the pair's more humble aesthetics throughout. Filled with a rich and alluring textures, soaring hooks, and a luxurious piano-led flow, they look set to continue their upward ascent throughout this year as well.

Eliot: I found an out of tune and unloved guitar in a corner of our house when I was 8 and that was it. I loved it. It was a terrible guitar but enough to get me going.

Jon: Guitar for me too, I was actually doing piano and really didn’t enjoy the few lessons I had- my teacher was quite scary and had loads of cats everywhere that would crawl across the piano keys. I soon changed to guitar and my best mate and I had joint lessons. It was such a fun, innocent time. We’d have to learn a new contemporary song every week together.

Eliot: Guitar based stuff. I was massively into Jimi Hendrix up until about 16 when I discovered raving and suddenly it was all about synthesisers.

Jon: I was raised on Springsteen and The Stones mostly by our Dad. Literally blasting on the school run and to football. Great memories of air drumming to Born In the USA in the back seat.

Jon: Michael Jackson, Off The Wall. True remarkable in terms of writing but execution of hooks, grooves and total euphoria.

Eliot: Such great heights by the postal service. The lyrics are pure poetry.

Jon: Born To Run. That song to me is like an opera. An unreal journey hanging on such a beautiful, hopeful lyric..musically too it’s such a journey from the first note to the last. It is cinematic to me always.

Eliot: With Reuniøn we tend to begin by casting a mood. Quite often our tracks have a drone or a pad which continues throughout most of the track and that is normally the first thing we do… It’s become an integral part of the process…

Jon: As above, I just like to chat, to play piano or guitar whilst speaking and try and soundtrack the conversation. Eventually something just clicks and ideas start to flow.

Eliot: The one time I really listen to music in a non work related way is in the car… Which means that it has to be universally appreciated by my family. Right now we’re listening to a lot of Jungle.

Eliot: Jean Michel Jarre doing another one of those big gigs next to the Eiffel tower with the Jet aeroplanes going over. That looked like fun.

Jon: Ha sounds great. I’d love a little run with Coldplay. I don’t think there is anyone close to them at the minute in terms of songwriting, production (both live and in the studio) and the desire for a show to be uplifting and escapist. I find it very emotional.

Eliot: Doing your favourite hobby for a living.

Eliot: I’ve always been quite envious of people that get a salary to be honest. Earning money in music is rather chaotic and unpredictable. I’ve always thought it must be nice to have a monthly ‘pay-day’ - most musicians don’t get that!

Eliot: Don’t worry about it being perfect.

REUNIØN's new single 'Caves' is available to stream now. Check out the new video for it in the player below.