Their self-titled debut EP is out now 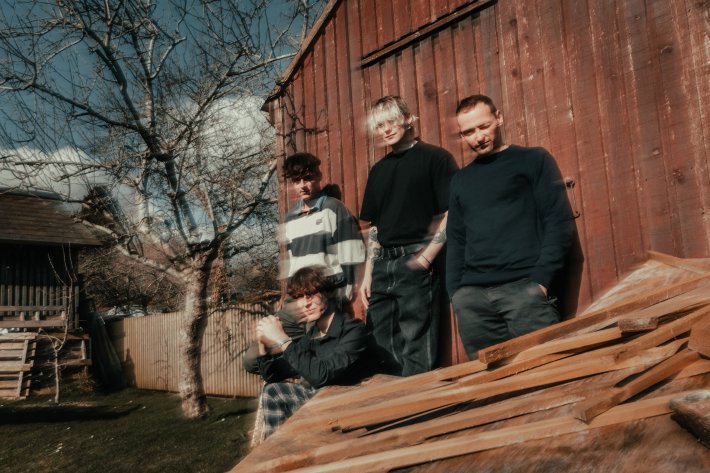 Led up by the brilliant new single 'Enjoy Yourself', this new collection looks to showcase all the qualities the band have focused on in recent times. Filled with euphoric hooks, blistering pace, and an enjoyable direction throughout, it feels like these guys will be establishing themselves even further throughout the year.

Charlie: The first instrument I fell in love with and learnt to play was also the guitar. Growing up I always wanted to be Kurt Cobain and smash some guitars up on stage.

Kane: When I was younger, most of my musical taste came from my dad. So mainly classic rock (The Who, Led Zep etc) and noughties bands too like The kooks, Razorlight, The View etc.

Charlie: I grew up listening to all the stuff my mum loved, so that was lots of Nirvana, The Beatles and Radiohead, as well as a lot of Oasis and Blur. I remember going to V Festival when I was really young with my parents and seeing Foo Fighters headline - I think that was the moment I knew I wanted to do music and bring that kind of non-stop energy to performing.

Kane: I think the first album I ever owned was ‘Appetite For Destruction’ by Guns’n’Roses. So nostalgic listening back today!

Charlie: The first album that was officially mine was probably ‘American Idiot’ by Green Day which still slaps to this day. However, growing up, I always had ‘Nevermind’ and ‘Rubber Soul’ playing constantly.

Kane: Probably “Dogs” (from Pink Floyd’s ‘Animals’). To be honest, the whole album for me is quite mind-blowing, but that song in particular just grabs me with all the dynamics and the instrumentation – a brilliant listen every time.

Charlie: ‘Grace’ by Jeff Buckley, hands down. I genuinely believe it’s, technically, the best song ever written. My GCSE music teacher played it to us on the first day of year 10 and I’ve loved it ever since.

Kane: Well, me and Lewis have our ways of doing it. But I guess it’s just more of natural thing really between us as we have been playing together for years now – it’s at the stage now where we all know what we want and how we want it to sound. It’s just a bit of development!

Charlie: To be honest, it kinda just comes naturally to us now. Someone, usually Kane or Lew, will come up with the basis for a song, and then we’ll bring it to practice and play around with it. But the majority of our songs always sound different after we’ve played them live a few times.

Charlie: The boys and I are all really been into Shame at the moment. Their new album is one of my favourite albums to have been released in the last few years. I’ve also really been into My Bloody Valentine again since all of their music has been put back on streaming services.

Kane: I think personally it’d be Shame because we would have to give so much energy opening up for a band like that. We always get right into it when we have loads of energy before a show. Plus they’re a pretty big influence of ours and it would be such a cool experience.

Charlie: Again it would probably be Shame, or Idles - or anyone at all who wants us to play a gig with them, because it’s been way too long.

Kane: Definitely playing live music for me... I love being on stage with my friends; there’s literally nothing better I can think of. We all get super-excited for the gigs we’ve played. It’s just satisfying when everything you’ve been working towards comes together and you get to perform your own music in front of people.

Charlie: Being able to play shows. There’s honestly no better feeling than nailing a gig with your best friends. And knowing that at least someone will be seeing us for the first time and enjoying our music makes it all worth it.

Kane: There are actually quite a few frustrating bits – writers block, getting everyone in one place at one given time, technical difficulties etc. But, if I’m honest, they’re all very minor inconveniences in comparison to the reward we get from it. Plus, I try not to be negative when doing anything with our music - it only causes problems if you have a negative mindset!

Charlie: Right now it’s trying to do anything during Covid, but that’s only because we all love playing music together so much. But all the frustrations that come from being in a band are always outweighed by the endless positives.

Kane: It doesn’t matter what anyone else thinks of you or your music. If you’re doing it, you should be doing it because you enjoy it. And if you’re not getting pissed off with your instrument every now and then, you probably aren’t practicing enough. It’s always going to happen - and it makes you learn when you come through the other side of it. And always learn from others - don’t let your ego get in the way of absorbing information and just allow yourself to be taught rather than being jealous or envious of someone’s ability. The best way for me to learn has always been from/through other people.

Charlie: To make the music that makes you happy and not to care too much about what people think about it. Sometimes you get so caught up in one negative thing someone has said that you almost forget how much other people, as well as yourself, really enjoy it.

Sub Cultures' self-titled debut EP is available to stream now. Check out the video for the lead single 'Enjoy Yourself' in the player below.

4 hours 34 min ago Following on from the rapturous praise for their brilliant debut LP 'Home For Now' in 2020, Babeh

1 hour 42 min ago Following on from the release of their stunning debut album 'Pleasure Ride' in 2020, British-Amer