Getting To Know... Tenacity

Getting To Know... Tenacity

Their new single 'Out Of The Dark' is out now 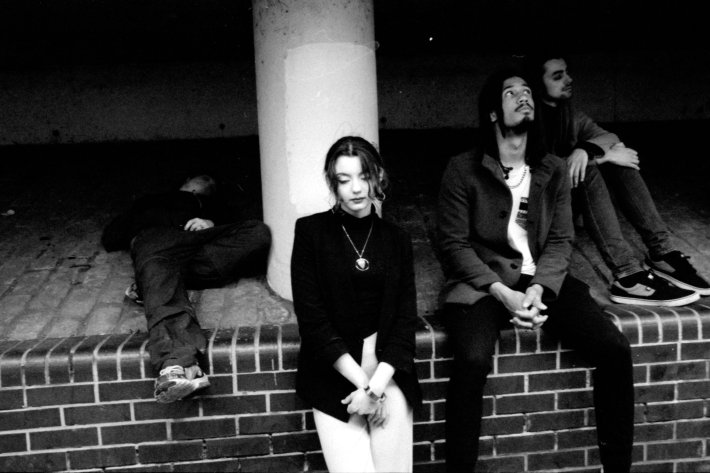 Following on from a flurry of impactful releases over the last few years, including their recent hit 'Overflow', London-based outfit Tenacity are back to deliver their next enticing single 'Out Of The Dark'.

Bringing back more of that smooth and atmospheric dream-pop aesthetic they are known for, 'Out Of The Dark' makes for a wonderfully alluring listen. Filled with warm and sweeping textures, vibrant tones, and some beautifully wistful vocals at the helm, this lot look set for big things in the months to come.

So with the new single available now, we sat down with Dan and Ula from the group to find out more about their origins and what has inspired them most over the years.

Dan: When I first started listening to music properly, I think I enjoyed songs more as a whole product (and that’s still true, I’ve just gotten better at singling out each element.) It was definitely guitar though, specifically Matt Bellamy’s playing on songs like ‘Hysteria’ and ‘Stockholm Syndrome’ by Muse. Those guitar parts felt like liquid metal being pumped directly into my tiny brain.

Ula: I always wanted to play the guitar but my mum made me have piano lessons instead. Back then I thought I hated it because I saw it as the reason why I couldn’t learn the guitar. Later on I did realise I loved piano just as much and honestly wish I had spent more time practising as a kid rather than sulking hah. In the end I’m super grateful that I started out on the piano.

Ula: All the cheesy Disney Channel bops (part of me still loves them). The Jonas Brothers were my favourite. Then as a teenager I was really into rock and metal, so I guess my music taste has changed pretty drastically throughout my life. I used to study at a conservatoire-style music school as well, which required me to listen to a lot of jazz. I wouldn’t say that I loved it but I definitely got something out of it. Now I’d say I just listen to a little bit of everything and especially love the stuff that doesn’t belong anywhere in particular.

Dan: Playing Halo: Combat Evolved at three years old was a pretty formative experience in my musical life and exposed me to a lot of super interesting composition ideas (big thanks to my cousins and Martin O’Donnell for that.) From there my taste really went along with the games and films I was enjoying; I still can’t get enough of Kelly Bailey’s soundtracks for the Half Life and Portal series, and I could sing you back anything from Star Wars in less than 12 parsecs. One of the first songs I really remember falling in love with, though, was ‘Virtual Insanity’ by Jamiroquai. Such a great track and video.

Dan: My parents bought me Demon Days by Gorillaz because I was obsessed with ‘Feel Good Inc.’ That was probably my first musical love, actually. I used to roll my eyes back into my head and pretend to be 2-D when we played it. The thing was, they only let me listen to that song, so not sure if it counts!

Ula: There are too many ha. At the moment, I’d say ‘Mirror’ by Sigrid. Even though it’s not Tenacity’s style at all, I just think this song is just a perfect pop tune.

Ula: Nope. It comes randomly, often when I’m in the shower or when I have to do some admin work and my brain desperately looks for reasons to procrastinate.

Dan: For me it’s more the case that I never stop writing. I sometimes hear things in my head while I’m out and have to record them quickly, but most of the time I just pick up my guitar and things spill out in a very messy way.

Ula: Allie X!!! I only discovered her music a couple of months ago and have just been OBSESSED since. I’ve also been listening to a lot of Rina Sawayama, St. Vincent, and Iris.

Dan: Recently I’ve been all over Kendrick’s new album and going back over his older music a lot. Besides that, I’ve also been listening to new stuff from Animals As Leaders, The Smile, and Jack White. Ula’s choices are all incredible too! We recently saw our friends in Castlecombe Drive performing at the BST Hyde Park festival as well, and I’m in love with their sound. It’s absolutely enormous.

Ula: At the moment, I just have to say Allie X.

Dan: Michael Kiwanuka is my dream pick. My mum and I saw him in Brighton in May and he put on the best show I’ve ever seen. On top of that he seems like a great person to be around.

Ula: That feeling when a complete stranger messages you on social media or comes to your gig and says they’ve been obsessed with your stuff and that your music means a lot to them. I always try to put myself in their shoes and think about the balls it takes to actually go up to a small artist and say something like this. With bigger acts it’s easy - you comment under their posts or send messages and it’s fine, because everyone does and you just blend in with the crowd. To actually step out and go tell your favourite small independent artist that their music inspires you is just really impressive and means so much to me.

Dan: Ditto. Another big part is the feeling of satisfaction as everything comes together in a song. We’ve been working on a bonus track for the past few weeks that will be going on the Bandcamp release of our album, and hearing it go from a rough sketch to something much more meaningful has been lovely, especially as it’s a very personal piece of music for me.

Ula: Social media. And the fact that as a musician nowadays you are pressured to be good at absolutely everything. A successful artist these days can’t just be a good artist. They need to be a professional videographer (or be rich enough to afford one on a regular basis), photographer, comedian, dancer, model, and everything in between. I feel like I sound like such a grandma but it IS really frustrating because you end up spending so much time on the other things that sometimes you just don’t have any time left for music itself.

Dan: Contrary to my last point, getting something that’s in your head onto the fretboard and then into the hands of the band can be very distressing at times. You often feel that it’s not what you had in mind, and it’s really difficult to fulfil those inner expectations. However, the outcome makes everything worth it, and it can be even more satisfying when you find something that ends up working better than your initial idea.

Dan: Something that’s stuck with me for the last six years is a piece of advice that my friend Relf gave to me when we first met at the BRIT School. I was spooked to begin with because he’s an absolute monster guitarist and all-around musician, and when I mentioned that to him he just reassured me that we all have something different to offer and that there’s not often an objective ‘better’ in music. I think that really helped me to carve out my niche as a player and not worry about comparing myself to others, so thanks Relf! Everyone should definitely check out his band Hypnogator’s EP. It will melt your face off.

Tenacity's new single 'Out Of The Dark' is available to stream now. Have a listen to it in the player below.

10 hours 38 min ago With her eagerly-awaited new remix EP landing next month, Bess Atwell has now shared the next cut

13 hours 33 min ago After an astonishing run of form throughout his releases over the last decade, South African sing