Their debut single 'Nothing's For Certain' is out now 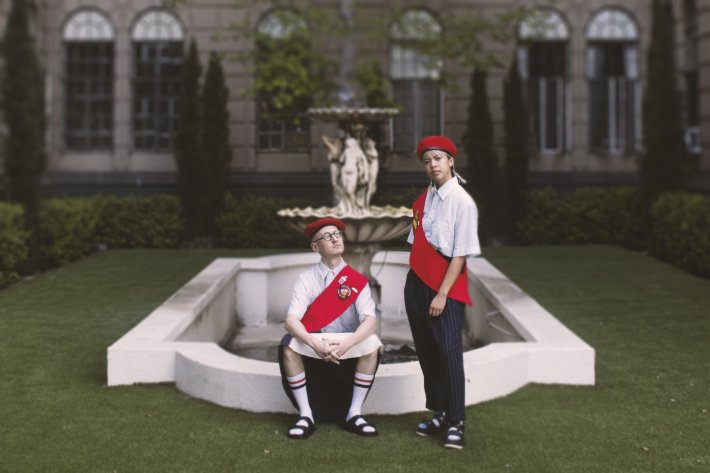 After spending the last year building and developing their sound, LA-based duo veronicavon have now introduced themselves to the world with their glittering debut single 'Nothing's For Certain'.

Channelling a wonderfully warm and breezy aesthetic from start to finish, 'Nothing's For Certain' makes for a beautifully rich introduction to their sound. With its lofty aesthetics and sweeping vocals layered throughout, these two already look set for big things ahead.

Xuan: We love ALL the instruments. Except piano. When I was very very little, I was forced to take piano lessons, and I hated it with the fiery passion of an 8 year old. It boiled over early on, when my dad caught me writing ‘I HATE PIANO’ on every square inch of a 8x10 sheet of paper.

Xuan: Color Me Badd, “I Wanna Sex You Up”

Chris: In 5th grade, my piano teacher gave me a cassette copy of Dvorjak’s ‘New World Symphony’, and I listened to it every single night with headphones on while I fell asleep. I used to wave my hands around in the air, pretending to conduct the orchestra, even though I had no idea what an orchestra really even was.

Both: Neil Young, “Heart of Gold”.

We like to drink a hot mug of hibiscus tea, smear ourselves with body paint (non-toxic), preferably warm colored hues. But then we try NOT to touch anything in the room. We find that this creates an intense level of concentration, ideal for crafting the perfect three-minute pop song.

We have a variety of band crushes on various artists, but we originally bonded over our mutual love for Andy Shauf’s “The Party”. It’s basically indescribable, how good that album is. We love Andy, and hopefully one day he’ll be our boyfriend.

Xuan: Honestly, when someone tells you “Hey, this song spoke to me”, that’s the best feeling in the world.

Chris: I love connecting with up-and coming artists, especially self-produced bands. A lot of people ask me about mixing, songwriting, and production, and it’s really fun for me to share tips and techniques from my own weird self-taught home-recording methods.

Chris: Well, I don’t love how Spotify CEO Daniel Ek scrapes the vast majority of value created by recording artists worldwide, and passes a tiny fraction of that massive wealth on to the artists. At the same time, licensing is in a death-spiral of race-to-the-bottom subscription models. So…. how am I supposed to, like, make a living?

Xuan: Just do the damn thing.

veronicavon's debut single 'Nothing's For Certain' is available to stream now. Check it out in the player below.

2 hours 52 min ago Following on from the release of their highly-praised mixtape 'Rōnin I' in March last year, UNKLE