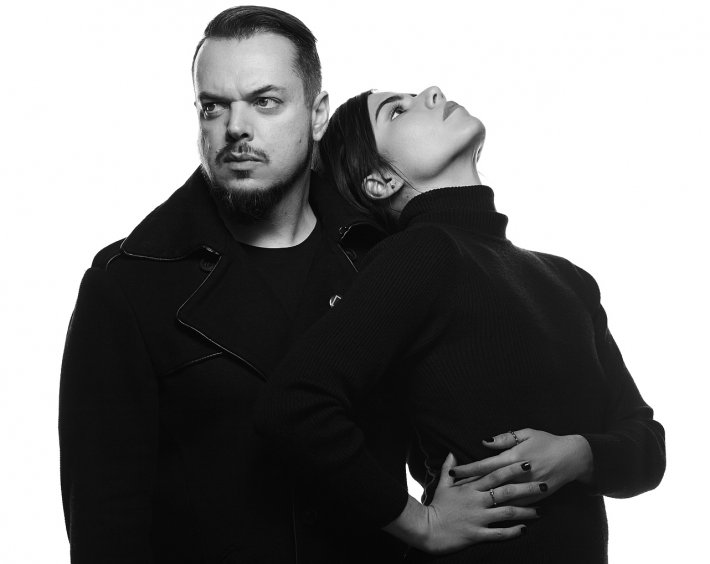 Mixhell have been one of the biggest electronic acts to emerge from Brazil to date. After forming part of Soulwax's live band in 2004, the couple have gone on to produce some of the most eclectic and diverse electronic music we have ever heard. Now the pair are back to share their latest collaboration with Hot Chip's Joe Goddard, so we sat them down to talk their past, present and where they are heading next.

Excellent, thank you. Unlike many musical duos, you two are actually married. Can you tell us how you met and what made you decide to start making music together?

Well, we met, in a club. At this techno club in Sao Paulo called DEdge. At the time Iggor was still in Sepultura and I was working at the Museum of Modern Art in Sao Paulo. To DJ was an excuse to do something together, not for work, to have fun. It then gradually came the remixes and gigs requests. It all made sense so we took it. Marriage came later.

And how do you find working with one another? Do you like to work as a unit or do you separate yourselves sometimes?

We like both. It is fun to work together but that is mainly when we argue or discuss. I am more of a producer and Iggor likes to perform. To finalise a track is always an unit, we then come back to work together.

You both hail from Brazil but have a sound that is much more international. Do you try and incorporate some South American vibes into the music you create?

Well, we think we don't try to incorporate, it just happens. Iggor's beats have an element of tribalism and it's rooted on Samba beats although its not the first characteristic one listens to. Portuguese is a language we constantly use in our releases, we kind of chose which lines sound better in which language. It just happens without us trying too much.

You are soon to release a collaborative single with Hot Chip’s Joe Goddard. Can you tell us how you met with him and how this new track came about?

We met Joe around 12 years ago in Sao Paulo. Since we then moved to London in 2013, he has invited us to his studio for jam sessions. Its a great place, he has our favourite selection of gear, it is just amazing. We love to sequence some drum machines and just jam with synths such as the Roland System 100, TTSH and the CS80. This specific track came about when we were exploring the ribbon of the Yamaha CS80 and it turned out to sound like what we called Killer Whales. Then, we worked a bunch of different synths and effects to go with it, I have to highlight the Omnichord and the Eventide H3000 which complemented it perfectly.

You’ve have also collaborated with many other big names including DJ Hell, 2manydjs and Diplo, but can you tell us how working with Joe has been in comparison?

Each collaboration is very different, but with Joe is has an element of surprise. We jam to relax, to have fun and to do something which is a breather from all of the other projects. So we put all of the machines on and jam for a day, recording sessions of around 30-40 minutes each. Some are just fun to do for the sake of it, while others turn into tracks. I normally bring the sessions home and edit parts, and then take it back to Joe. Its a slower process but organically music starts to happen with a structure, a verse, a chorus. After couple of editing sessions we check what's missing and eventually record some vocals or acoustic drums. It's VERY fun and a completely different creative process.

You released your last EP ‘Strong & WRONG’ last year, and have now returned with this new single already. So can we expect another EP or album from you very soon or is it too early to say?

As we said before, the main focus of making music with Joe is not of the making big releases. But it has now become something solid, we had Crocodile Boots, Strong and Wrong and now Killer Whale. There is another amazing track on the make. It would be a cool idea to do a full album, let's see.

And what about your plans for the rest of the year? Are there any live dates that we can check you out at in the future?

We are working on that as we speak. It would be really cool to do something very special, perhaps with Joe and Mutado Pintado, so we have to find the right time when everyone is available.

And finally, what has been the best memory you have since you started Mixhell together?

Best memory... I have to say, we have lots of them. Playing a DJ set for a crowd of deaf people at the São Paulo Museum of Modern Art is one of the highlights.

Mixhell's collaboration with Joe Goddard, 'Killer Whale', is available to stream and download now. Have a listen to it in the player below.