The band will be performing at Sŵn Festival later this year 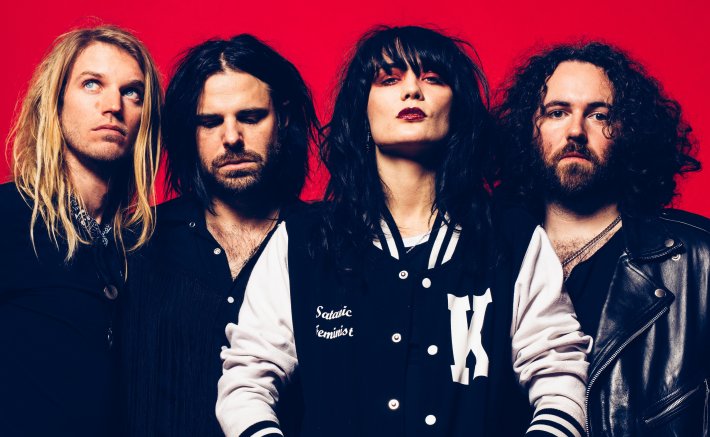 Since releasing their heavily praised debut album 'Welcome To Silvertown' earlier this year, London-based alt-rockers Saint Agnes have been going from strength to strength. With a fully booked year of touring, which includes a stop-off at Cardiff's Sŵn Festival in October, we sat down with Kitty and Jon from the band to discuss their recording process, how life on the road has been treating them, and what they have in store for us in the coming months.

Hi guys, how are you doing today?

Jon: Today is a good day. We’ve just been surfing, our first session since we released our album as touring has been so hectic.

You released your debut album ‘Welcome To Silvertown’ back in April and spent the last few months playing festival shows to support. How have you found the crowd response to your new material?

Kitty: We’re still growing as a band so most of the shows are to people who’re curious, or have heard a couple of songs but not seen us before. We just go out and throw ourselves into each show like it is our last and the crowds seem to feel the energy and give it right back to us. The response has been amazing and each show beats the last. By this reckoning SWN should be wild.

You also self-produced the record using organic and analogue techniques. Was this something important to you in order to get the sound you wanted?

Jon: We are naturally suspicious of anything that is ‘just the way it is’. An example of that is the current thinking around rock band recording is you go...well of course you do it on a computer, everyone playing separately and you make it as perfect as possible. Our thought was “well, why has this become the normal way to record?” Our aim is to create something unique to us and capture a one time performance with all the heart that brings to the sound. To do that we recorded in one room, all together, to tape. This forces you to embrace the chance moments and live with mistakes.

Given that you have been releasing music for the last few years, how long was the album under construction?

Jon: I think that word ‘construction’ says it all. So many records are now pieced together by many hands that we wanted to rebel against that. The whole thing was recorded and mixed in 2 weeks but there was no set time it was created in as some of these riffs came from ideas I had 10 years ago, others were created on the spot so it is hard to pin down.

You have also got a busy couple of months at the end of this year. A few more festival shows before heading off on a UK tour and Swn Festival in October. Are there any shows you are looking forward to in particular?

Kitty: SWN will be our first festival in Wales so we’re excited to play that show, see if we can win some hearts and minds. London is where the band started and is where everything has grown from, so our headline show at Dingwalls, a venue that is legendary in our minds, is particularly exciting. We have some special things planned for it too.

And how do you feel about touring? Do you find it enjoyable or are there parts you could do without?

Jon: It is a privilege to be able to play night after night with our own gang. There are some hard times, but they are much easier to overcome when you’re good friends. We just deal with problems as they come up and move on, plan what we can do better tonight compared to last night. That being said I could live without ever eating from a service station again.

But aside from the touring, do you have any other plans to get back into the studio at any point later this year?

Kitty: We never stop writing so we have plenty of new music, but we’ll see when the time is right.

And finally, now as everything is kicking off for you, what plans have you added to your bucket list of things you would like to achieve as a band?

Jon: Being a musician, being in this band is what I do, success or failure, I know no better way to expend my energy. So I don’t really have a bucket list. We already recorded an album, that was about as far as my day dreaming went. This is an adventure, who knows where we’re headed? This is a lifestyle so is not separate from real life. It is our lives.

Saint Agnes' debut album 'Welcome To Silvertown' is available to buy and stream now, and they will be heading over to Cardiff for Sŵn Festival from 18th-20th October. Check out the video for their latest single 'Move Like A Ghost' in the player below.

4 hours 34 min ago With their highly-anticipated new album set to land in the coming months, Paramore have now unvei