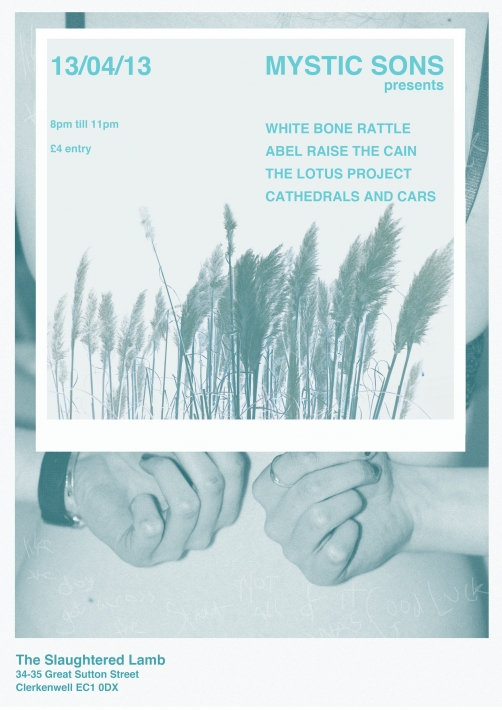 Mystic Sons Records presents its next night of live, unsigned music on Saturday 13th April at The Slaughtered Lamb in Clerkenwell plays host to some of the UK’s hottest new and upcoming bands. £4 Entry, watch this space for features and reviews of the artists involved.

WHITE BONE RATTLE will headline the show, having previously released their debut album ‘Creature of Curiosity’ on November 2012. The band, formed in 2009 by two pairs of brothers are a psychedelic rock band from Maidstone, Kent. http://www.facebook.com/whitebonerattle?fref=ts

Coming all the way from the cold cold north of England that is Middlesbrough, ABEL RAISE THE CAIN are an alternative post rock band that spend their time creating euphoric, indie/pop rock songs. Having recently released the single ‘Too Late’ (BBC Introducing) the band are gathering momentum going into the festival season and are in London for an exclusive show. http://www.electricharmonymusic.com/#/abel-raise-the-cain/4565977419

CATHEDRALS AND CARS are a Suffolk-based five piece who have, since their inception, taken the counties of East Anglia by storm. After reaching the final of BurySound and the release of their ‘beautiful yet melancholic’ (Generator.org.uk) debut EP, Sky Lanterns, the band released a new album (July 2012), ‘Control Is Not Perfection’.