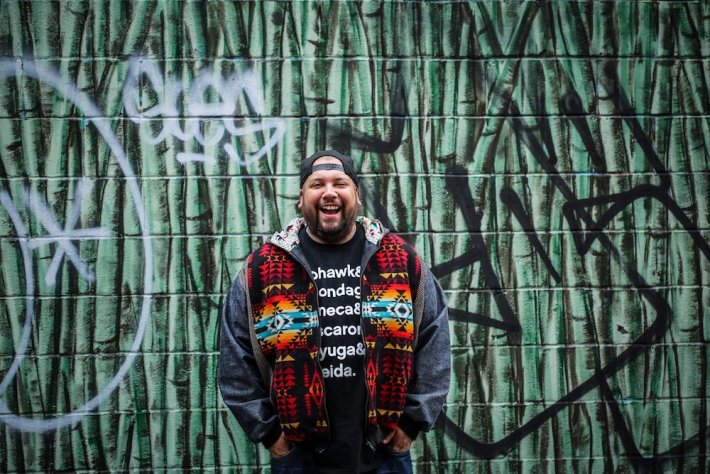 Following on from the release of his previously shared single ‘Calling All Dancers’ and ‘The Social’ ft. Phoenix, which was released to raise money for Black Lives Matter and Missing and Murdered Indigenous Women earlier this year, Canadian producer DJ Shub now returns to announce the details behind his highly-anticipated new studio album ‘War Club’, via his own Shub Music imprint.

With a sound that looks to merge the worlds of hip-hop with a bold and ferocious production, ‘War Club’ is set to become the producer’s most intense and powerful record to date. Arriving at a pivotal moment in the rap community with political and social upheaval dominating the scene right now, this new collection comes across as a battle cry for change, filled with high-energy beats and rapidfire flow throughout.

Featuring the previously shared single ‘The Social’, which saw him team up with Toronto native Phoenix, who has been a solid addition to the Canadian music landscape for the last decade. Since the release of her 2011 debut album ‘Books, Bucks & Beats Vol. 1’, she has been an integral part of the hip-hop scene in North America, both as a member of the notorious hip-hop collective The Sorority and as an independent solo artist. All proceeds of the release were distributed to causes close to DJ Shub and helped motivate the fight for change in our oppressed communities. Black Lives Matter and Missing and Murdered Indigenous Women are charities and support networks that have contributed amazingly to the efforts to provide education and unity to those victimised by the makeup of our societies.

With more than 1 million Spotify streams and 2.6 Youtube views under his belt, DJ Shub aka producer Dan General is far from a lightweight on the scene. Originally making his mark as a member of A Tribe Called Red, winners of a Juno Award in 2014 and shortlisted for the esteemed Polaris Prize music award, Canada’s equivalent of the Mercury Prize, in 2013, as well as being dubbed the Godfather of PowWowStep, he has continued to confirm his reputation as one of Canada’s most forward-thinking artists.

Billboard just interviewed stating ‘DJ Shub Is Using Music As a Weapon’ and with his upcoming album called War Club, it’s got statements backing this up throughout.