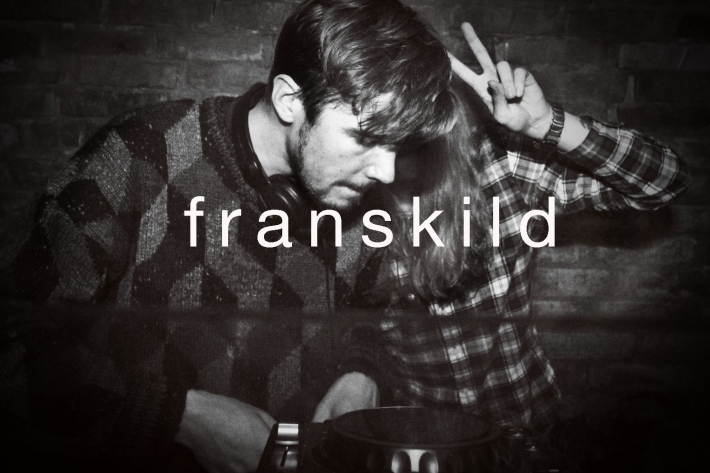 f r a n s k i l d is a name you’ll be hearing in a multitude of ways in the coming months and seasons. And for those who are yet to hear their dreamy, mysterious mix of weird and wonderful house music, let’s set things up for you. This duo (who we suspect secretly want to be a four piece, is a collaboration between Love Ojensa and Tim Söderström. “We come from the same small town in Sweden,” says Love. “We went to the same school but I didn’t actually know Tim, I was two years older.” “And we met through my gang, continues Tim. “We were introduced via a mutual friend in a little bar called Bongo Bar where Love was DJing. I was kind of his idol! But then Love moved to Stockholm and I moved to Copenhagen to study architecture and a year ago he joined me in Copenhagen. I was fed up with Stockholm!" As is always the way, they discussed mutual concepts and passions, some musical, some existential. “Yes. At the same time, we discussed getting into projects through the music we loved. We talked over Facebook and SMS for a year or so, just discussing the music. We just talked and talked. But you never know what it becomes before you sit down and do it. We never said: we want to make house. We talked in terms of melancholy, of space and of atmosphere.” And that, friends, is their secret. There’s no formula, no genre and no band they’re trying to mould themselves into. As new track ’Shards’ attests, the band they evoke is somewhere between Hercules and Love Affair and Royksopp. “This is quite interesting,” says Tim. “Love is more classical and pop. I like every kind of music except metal!” Love: “Tim, in his early teens was all about trance and David Lynch music. So we didn’t connect over a band… it was more complementary. I liked straight up house.” They do have a motto though: no rules, just sound. ‘We connect on different planes than music. More in terms of live. We really like hard electronic music like techno and tough vocal hooks with hard beats. When we go out, we want a stupid beat!” Their debut single Majestic Mountains, however, is far from stupid and evokes The xx and Dixon at their deep, soulful best. “We just sat down after 8 months made some atmospheric stuff and after 8 hours, we had a piece. It was called 126BPM/Homage and then we released it on Soundcloud.” Next came the afformentioned ‘Mountains’. “We love the house piano!” they laugh. “We had a friend join us at a pre-studio ritual dinner… he brought one beer! Then he stayed in the studio and sung. We were co-writing and it became ‘Majestic Mountains’. I think the vocal is the most unique part of our sound.” Then came the final piece of the puzzle, when Love rang his sister, a classically trained musician, who slotted into effortlessly after Gustav Pettersson. “Gustav and Rebekka produce - but they say that they sit too long with things and delete everything they do… whereas we can say stop. So we rang up my sister and she said she wants to sing on the track. And we really clicked. So it’s grown into a 4 piece band, especially with the dialogue we have with them. We know our positions. We don’t WANT to be trained musicians!” The key, it seems, is finding things that aren’t perfect, that move you and surprise you. “We want IMPERFECTION! Perfect is boring. Small imperfections become what you love the most.” Deep, atmospheric, mysterious imperfection: franskild are here to soothe your soul. Biog written by Ralph Moore (Mixmag)
Clients