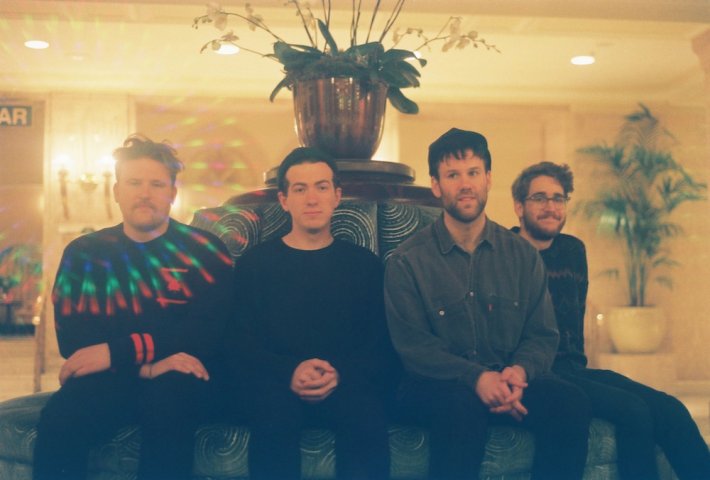 “Where do you go? Waiting around, where do you go from here?” wonders the chorus of “Secret Friend,” the first single from GROUNDERS’ debut self-titled LP. With a dreamy, reverb-drenched intro, the song drifts alongside layers of wobbly arpeggiated synth lines and space-age guitar melodies. It’s the opening track, and it’s also a fitting intro to GROUNDERS. It shimmers and gleams, but there’s a scrappy, stripped-back undertone that chips away at any polish. For every catchy hook and lush arrangement throughout the album there’s a woozy counterpoint that keeps things slightly off-kilter.

Where do you go from here? Into the weird and wonderful pop world of GROUNDERS.

This spring, the Toronto-based band – Andrew Davis (vocals and guitar), Daniel Busheikin (keyboards), Mike Searle (Bass) and Evan Lewis (guitar) – will release their first full-length album, a collection of dense and intricate pop music under the gauzy veil of krautrock and psychedelia. In the time between releasing the Wreck of a Smile EP in 2013 and laying demos for their debut album, GROUNDERS rediscovered their love for classic pop music, an appreciation that had waned over the years as they became obsessed with circumventing the conventional. They listened to pop staples like David Bowie and Devo, and revisited old favourites like Velvet Underground, Neu and the Zombies. When GROUNDERS finally came up for air, they had a newfound love for pop and a glut of ideas for a debut LP.

Meanwhile, Meditation for Dummies and David Lynch’s self-help guide Catching the Big Fish, on transcendental meditation and the creative process, were passed around the van while touring through North America. As Davis’s interest in meditation increased, his lyrics began to reflect his search for serenity and inner peace.

The album came to life in two distinct spaces: Davis’s bedroom in Toronto’s sleepy High Park neighbourhood; and a spacious two-car garage packed with vintage gear from various pawn shops and second-hand stores across the country.

After recruiting DIANA’s Kieran Adams to handle drums, the band headed into the studio with longtime pal Marcel Ramagnano (Born Ruffians, Absolutely Free) to record. Months of tracking, tinkering and layering later, GROUNDERS enlisted the incomparable David Newfeld (Broken Social Scene, Holy Fuck) to give each song the bombastic, fried analog treatment he’s become known for. First single "Secret Friend" sounds like a bleached and sunbaked Zombies; “Vyvanse,” which yes, is named after the ADHD drug, contains a lilting guitar riff that’ll break your heart; “Pull It Over Me” careens into the dreamy ether courtesy of a wistful cyclical guitar that’s the epitome of a lazy summer’s day; “No Ringer” is a wobbly Silver Apples trance doused in a saxophone freak-out; "Fool's Banquet" sparkles like early Broadcast flooded by constant glistening waves of pleasure. After cross-country tours, an acclaimed debut EP and a David Lynch-inspired spiritual journey, GROUNDERS have finally come of age.